It's 1967 all over again: The roots of our current divide go back 50 years

Yes, 1967 brought us the Summer of Love and "Sgt. Pepper." But it also kickstarted contemporary politics 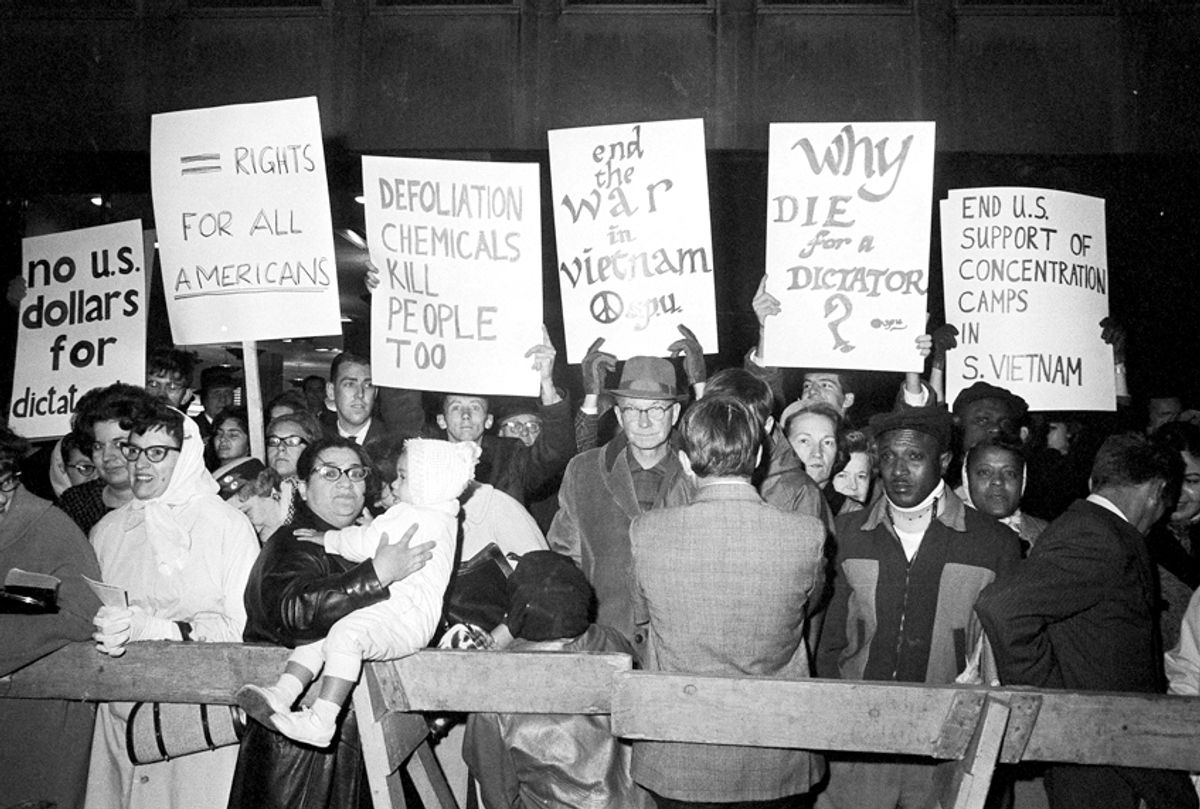 As a college student in 1967, “fifty years ago” meant 1917 and World War I, a time and event far from any direct connection with me. To young people today, 1967 must seem as distant and largely irrelevant.

Yet both years were profoundly important turning points in the life of this nation. 1917 marked the entry of the United States into World War I — perhaps the bloodiest, most pointless war in human history — and into a far more significant, militaristic global role.

While 1968 gets more attention from historians, 1967 saw important shifts in the nation’s politics that have shaped the world we live in today.

As the purveyors of public history, mass media reflections on 1967 typically emphasize popular culture and celebrities: Muhammed Ali stripped of his heavyweight title, the release of the Beatles’ “Sgt. Pepper,” the first rock festival at Monterey, the Summer of Love, the release of “The Graduate, etc.”  These brief glimpses fail to convey the historical context that produced events like these.

Yet two new films, Ken Burns’ “The Vietnam War” and Kathryn Bigelow’s “Detroit,” remind us that there are still conversations we need to have and lessons we need to learn from this past. Both films remind us of the roots of today’s Black Lives Matter movement and the never-ending American wars in Iraq and Afghanistan.

1967 marked the fourth consecutive “long, hot summer” of urban uprisings, epitomized by the decade’s two most destructive riots, in Newark and Detroit. While the national media had ignored inner-city life prior to the riots, the nation watched in horror as saturation coverage provided staggering footage of the cities burning, residents gleefully looting, and federal troops and National Guard crushing these urban rebellions.

Significantly, both events were triggered by acts of police brutality — the same factor that gave rise to the Black Panther Party for Self Defense, and much more recently Black Lives Matter.

Although police brutality was the spark that ignited rioting, inner-city frustrations had been building for years even as the civil rights movement achieved historic gains in the South. “War on Poverty” promises largely failed to improve inner-city conditions, while the most promising bottom-up Community Action Program was co-opted by a top-down Model Cities Act.

One young black man claimed after the 1965 Watts riot, “We won because we made the whole world pay attention to us.”  Yet, crucially, the urban riots proved highly useful foils for reactionary campaigns.

Barry Goldwater exploited the 1964 Harlem riot to become the first Republican presidential to win four Southern states; Ronald Reagan played on fears aroused by the 1965 Watts riot to win the California governorship in 1966; and, following Newark and Detroit, Richard Nixon (and George Wallace) would successfully appeal to “law and order” concerns in 1968.  That reactionary path led, administration by administration, to the mass incarceration of African-Americans.

At the same time, the war in Vietnam continued to escalate in 1967 despite more than two years of significant and growing antiwar activity and increasing numbers of “dove” voices in Congress. Mass media accounts were outright dismissive of antiwar movement perspectives. Frustrations were growing apace. As journalist Andrew Kopkind put it, “To be white and radical in America this summer is to see horror and feel impotence.”

In October, following a call to “Confront the Warmakers,” more than 150,000 people traveled to Washington for the March on the Pentagon. In contrast to popularized myths about the antiwar movement, they marched behind a banner that proclaimed, “Support Our GI’s: Bring Them Home Now.” At the Pentagon, they were met by billy clubs and bayonets.

That same month, violent police attacks on antiwar protesters in Madison, Wisconsin, and Oakland, California, produced the expected response in a movement that was highly decentralized: growing militancy and, at times, violence by antiwar cadres.

While the antiwar movement remains one of the most maligned movements of the ’60s era, its very contestation of the war made people pay closer attention to the war. Growing antiwar sentiment and the growing militancy of the movement eventually helped force the Nixon administration to end the American war.

Yet, while some 60-70 percent of the American public came to view the Vietnam War as “more than a mistake” and “fundamentally wrong and immoral,” in the years after the war American elites, aided by the complicit mass media, used a number of approaches — proxy wars, CIA overthrows, counterinsurgency campaigns, and eventually all-out wars — to overcome what they called the “Vietnam Syndrome,” returning American foreign policy to its imperial overreach. Even today, the neutral stance toward the war in the Ken Burns film reflects the unwillingness to confront the fundamental nature of that war. Not surprisingly, we find ourselves stuck in unwinnable imperial wars in Iraq and Afghanistan, our military intervention producing precisely what it claimed it was preventing — as it did in Vietnam.

The media-facilitated backlash to these rising currents led the white South and much of the white working class into the right-wing dominated Republican electoral camp, while the Democrats moved systematically into the corporate center.  This is where we find our politics today, in a partisan divide between neo-fascism on the right and corporate centrism masquerading as the left.

As for media-hyped phenomena from 1967, like the infamous “Summer of Love,” these were early indicators of the way mass media learned to tap into youthful disenchantment and produced an “expressive politics” capable of being largely absorbed into the culture of consumption and entertainment.

Later generations have inherited a popular-history “Sixties” that is all about rebellious youth, celebrities and a politically sanitized war, absent the powerful lessons about roots of contemporary issues and effective political organizing that could help to empower activists today.

While there are many lessons to be learned from this history, one that speaks powerfully to the present moment is the need for the widely diverse and fragmented channels of progressive resistance to find their way toward a relatively coherent left perspective that is reflected organizationally in a way that gives effective voice to the left.