A city's or country's icon immediately invokes the character of a place. America's is now cloaked in irony 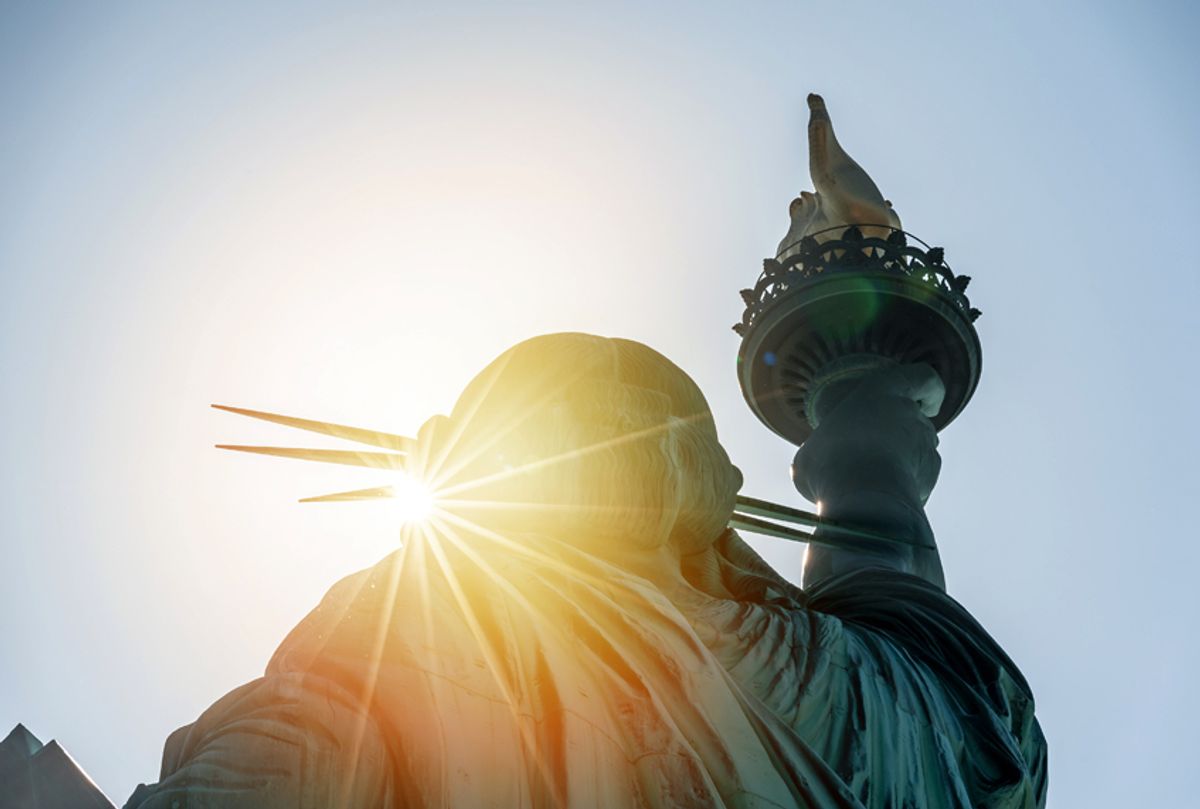 I'm an art historian specializing in iconography—the study of symbols in art. That’s the real life version of what Dan Brown’s “Da Vinci Code” protagonist, Robert Langdon, studies, which Brown describes with the invented word “symbology." In art historical terms, this refers to what historian Erwin Panofsky called “disguised symbols,” which are objects intentionally inserted into artworks for their symbolic, not their literal, value. In Jan van Eyck’s “Arnolfini Portrait” (aka “The Marriage Contract”), we are not supposed to assume that the Arnolfinis actually stored oranges on the windowsill of their bedroom. Rather, the oranges are meant to symbolize the family’s wealth, as oranges had to be expensively imported from Spain to a chilly northern city like Bruges, where the family lived. The family may well have had a lap dog as a pet, but its role in the painting is to symbolize loyalty, as in the loyalty of the couple to one another. There may, or may not, actually have been a statue of St. Margaret carved onto the bedpost, but its role in the painting is to demonstrate the couple’s desire to have children, as this was the patron saint to which you would pray in hopes of conceiving.

While iconography is most evident in paintings, it is also present in architecture, monuments, indeed everywhere we look. If I tell you that there’s a building with a cross on top of it, you would know that this is a church, because the cross is an icon meant to recall Christ — an extremely ubiquitous and well-branded icon. Likewise, spotting a set of yellow arches in the sky above a restaurant tells us that the restaurant in question is McDonald’s — the yellow arches that form the letter M is its icon. But what about countries or cities? They, too, can have icons, a single image, a glimpse of which tells us clearly where we are.

Consider which shot a filmmaker would choose as a shorthand to show the audience where the action is taking place. For Paris? You’d likely get a shot of the Eiffel Tower, which has become the city’s primary visual icon. Barcelona? The Cathedral of la Sagrada Familia, designed by Antoni Gaudi. Berlin? The Brandenburg Gate. London? Well, some cities are substantial enough to boast multiple icons, and you might argue for the Houses of Parliament and Big Ben, or Tower Bridge. New York’s iconic image was once the Empire State Building. Since 9/11, it has been, in the retrospective mind’s eye, the World Trade Center (which, we tend to forget, was never a particularly beloved or admired building, until it was attacked). The Statue of Liberty, ironically a gift from the French, has long been the stand-in for America itself. It represents the welcoming of immigrants, hope and (at least theoretically) liberty for all. These days, a shot of the Statue of Liberty is as likely to be met with irony as pride. Can it still be considered the icon of the United States?

Visually, it remains most associated with America and the founding ideals of the country. But while it is the superficial name tag of the country, orienting viewers as to which nation they are seeing, it no longer embodies what most thoughtful Americans think of when they think of their country. Likewise, foreigners no longer look upon this icon with the same reverence. The looming orangeness in the White House, making a grumpy, angry, whiny face, has stepped forward to blot out other icons of today’s America, much as Putin has blotted out Russia’s former icon, Red Square. But if we’re looking for a building or monument, then the Vegas Strip is probably more appropriate, in terms of accurate symbolism, than the outdated Statue of Liberty. Which was designed by a foreigner, anyway, and a Frenchman to boot, and is probably some kind of Trojan Horse sort of gift . . . (cue conspiratorial grumbling).

But what if a country or a city lacks an iconic image? This question first came to my attention when I read “Trieste and the Meaning of Nowhere,” by the great travel writer Jan Morris. This book is about the city of Trieste, which is a mixture of Italian, Slovenian and Austro-Hungarian cultures and, as such, is enough of an admixture that no single icon stands out. It is famous for Illy coffee and it boasts a spectacular main square, with impressive buildings on three sides and the sea on the fourth. But somehow even a great architectural space has not translated into a world-famous icon, perhaps because the city was never a big tourist destination (not enough James Bond films with scenes there, to introduce viewers to the de rigueur iconic air shot to establish the spy’s latest location). Morris’ book is a meditation on the sort of places that do not exist in the mind’s eye of those who have not been there, but are fascinating nonetheless—perhaps more intriguing, because they feel more like hidden gems to those who do “discover them.”

I consult to the tourism folks in my adopted homeland of Slovenia, and I see the problem here, too. I say “problem” because, from the perspective of drawing tourists, life is much easier if you have a single iconic image that the world associates with you. Slovenia’s most-photographed spot is Lake Bled, which is arguably the most picture-perfect postcard place on the planet (an alpine lake with a castle perched on a precipitous cliff overhanging it, and an idyllic church on the single island in the middle of the lake). But Ljubljana, the capital, has no such single image. Those who visit it leave with a warm glow and an extremely positive impression, but there is no single view of the city that acts as a quick-reference. Instead, there’s a general good vibe. This is not bad, but it makes it difficult to court tourists. The specific is always easier to remember than the generic, even when the generic memories are all very positive. The result of this is that Ljubljana Tourism is seeking an icon for the city; that is, they are trying to create an artificial icon, in that the icon is not organic, but rather chosen and promoted. When it works, this strategy can be brilliant: Consider the down-on-the-heels industrial city of Bilbao. A single iconic building, Frank Gehry’s Bilbao Guggenheim Museum, launched a renaissance of the city, making it a major tourist destination. So, what do you choose?

There are some cities that are nearly “invisible” for their lack of an icon. Take Slovenia’s second-largest city, Maribor. It’s got the world’s oldest living grape vine, but beyond that . . . I’ve lived many years in Slovenia and still have no solid sense of Maribor’s personality. It’s not just me. Poet Ales Steger’s first novel “Absolution” is set entirely in Maribor and approaches the city much as Bulgakov treated Moscow in “The Master and Margarita.” But even after reading an entire beautiful novel that was meant to make the city, the novel’s real protagonist, feel three-dimensional, I still don’t have a good grasp of it. And that’s part of the point. It may be a pleasant place to live but, even for Slovenes, Maribor is a slippery non-memory.

More than a decade ago, I attended a lecture on iconography that used an Abercrombie & Fitch clothing ad campaign as a case study. The campaign sought to “brand” Golden Retriever dogs as subconsciously associated with Abercrombie & Fitch. The idea was to include a Golden Retriever in every ad, in hopes that audiences would begin to link the breed with the clothing brand. That would make the sight of any Golden Retriever, even one on a walk in the park, into a four-legged ad for the company. It didn’t work, and they moved on to other campaign ideas. Such is the danger of an artificially-inserted attempt at iconography.

The most obvious choice for a proactively-inserted icon for the city of Ljubljana is the Dragon Bridge. The Secessionist concrete bridge has impressive bronze dragons poised on each corner, and this is associated with the questionable legend that Jason and the Argonauts stopped off in Ljubljana to slay a dragon before heading home with the Golden Fleece. Brussels is a city that is known largely for a statue, the Manneken Pis, so this is a possibility. But those who know Ljubljana, who have visited, are inevitably wowed by the ubiquity of its greatest artist, the Modernist architect Jože Plečnik. While he was responsible for most of the memorable buildings in the city center, none of them stand out from the others as they intentionally meld into the cityscape, complementing it without outshining the whole. The Bilbao Guggenheim was successful because it looked nothing like the rest of Bilbao, which was not much to look at to begin with. Ljubljana, on the other hand, is universally considered lovely.

But there is one building that Plečnik designed, but never built, that would instantly become the city’s icon. It’s an obvious choice, since it is the design of the nation’s greatest creator, but for political reasons, it was never constructed. It was called the “Cathedral of Freedom,” and would have become the Parliament building. It called for an enormous building set on a cubic base with a striking conical tower 25 meters in diameter, rising 60 meters up out of its center, like a great horn. The conical tower would be spiraled on the inside, giving it the appearance of the heliotropic ramp of Hadrian’s Tomb inside Castel Sant’Angelo in Rome, turned inside out. Perhaps the most striking architectural feature is in the support of the conical tower by twelve monumental tilted columns. Inside and out, it would have been Ljubljana’s memory-marker. It still could be. The design is complete. It just takes a bold politician to make it happen. Until then, it remains a city that is beloved of all who comes (that’s what the name, Ljubljana, means), but one that remains only a pleasant blur in the touristic imagination.

Perhaps that is preferable to an icon, like the Statue of Liberty for the U.S.A. today, that is an icon sadly draped in irony.