The for-refugees, by-refugees newspaper that prints in six different languages 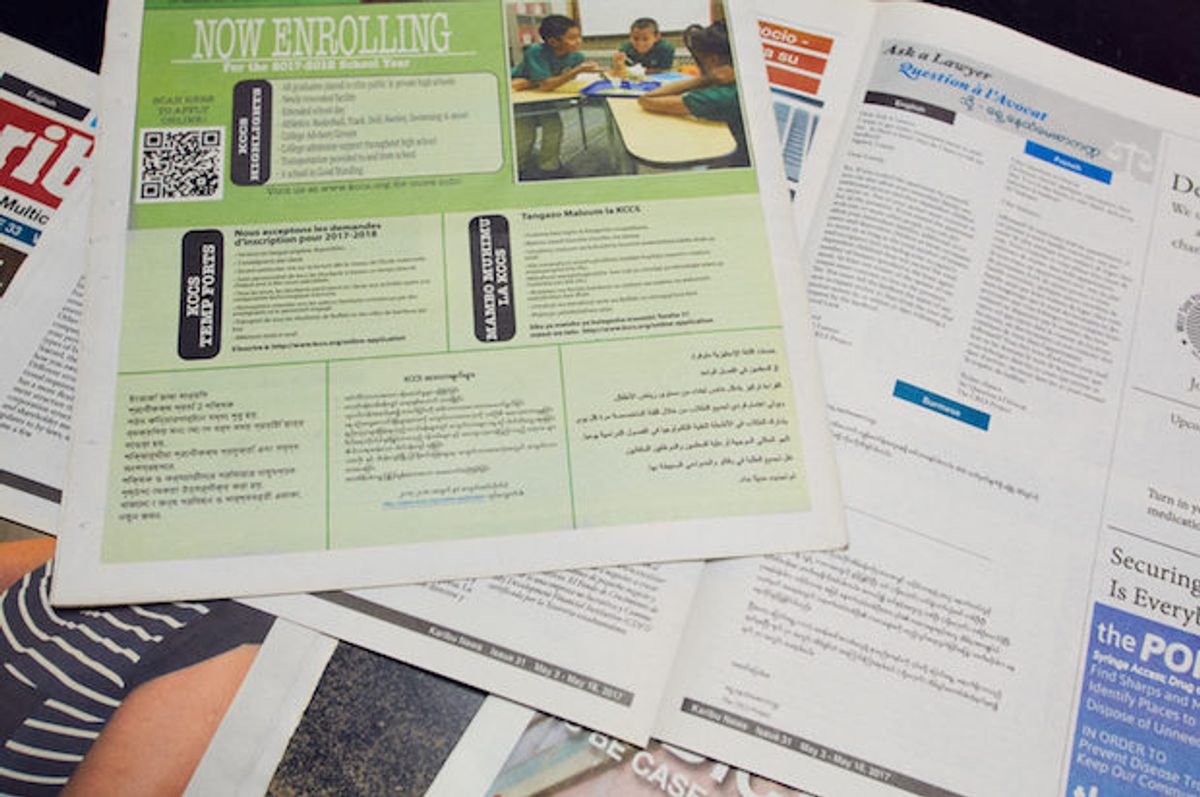 Every night for three years, after everyone else was asleep, Ze Yar Swe would hide in the corner of his prison cell and secretly read newsmagazines in English, a language he did not know.

“There was a corner that had some light, not a lot of light, but that’s where I would read,” he remembers. He used them as a tool, in tandem with a Burmese-English and English-Burmese dictionary, to teach himself English.

Yar Swe served jail time between 2002 and 2005 in Shwedo, Myanmar. Arrested for attending a protest against a member of the military who was accused of rape, he was well aware of the risks of being caught reading the magazines his friends had smuggled in.

“If they caught you with even a pencil, they [could] add five years to your prison sentence,” Yar Swe says. But that fear did not stop him. One of the prisoners who brought magazines like Newsweek and Time into the prison also served as a mentor, helping him understand grammar rules. The two, along with other prisoners, paid bribes to some of the guards who found out about their reading.

“By reading, you stay connected with the outside world,” Yar Swe says.

Today, at 42, he is an English-Burmese interpreter and a journalist residing in Buffalo, New York.

Following his release, Yar Swe fled for neighboring Thailand, later seeking asylum in the United States. He arrived in Buffalo in 2008, thanks to assistance from Journey’s End, a local refugee resettlement agency. He currently works for Karibu News, a newspaper founded by a Rwandan immigrant in 2015. Karibu, which primarily serves Buffalo’s refugee community, publishes a print edition that includes articles in six different languages, with as many as four different languages in any single issue.

Read more Narratively: The “Fixer” at the Heart of the Campus Sexual Assault Debate

In the 2016 fiscal year, the U.S. admitted 84,995 refugees into the country; 1,600 refugees were resettled in Buffalo. Karen M. Andolina Scott, executive director of Journey’s End, says “the federal government has listed Buffalo as sort of a prime community for refugee resettlement because of the availability of housing and jobs and low cost of living.” Thus, Karibu News is read in Arabic, Burmese, Somali, Karen (an ethnic language spoken in Myanmar), Swahili and Spanish, catering to the diverse local refugee community.

Eva Hassett, executive director of the International Institute of Buffalo, an agency that has been resettling refugees in Buffalo for almost a century, says the presence of refugees and immigrants has the potential to reverse the population decline the city suffered through in the latter half of the 20th century. Having refugees “means there are people for your workforce, employees who companies can hire so that the companies can grow here,” she observes. “It means there are homeowners for houses, children in the schools.”

Hassett adds that the native-born population in Buffalo is still shrinking, but the immigrant population is starting to make up for it, and platforms such as Karibu News foster the growth of the diverse community, while helping immigrants “learn how to function in American society.”

Read more Narratively: How Helping a Stranger With a Severed Finger Saved My Life

The paper’ publisher, Rubens Mukunzi, 38, fled Rwanda in 2014, and eventually settled in Buffalo. A former radio journalist in the Rwandan capital of Kigali, Mukunzi says, “When I got here, I couldn’t speak English. It was very hard to find information. I started this paper . . . to help these people who don’t speak English.”

“News is not just about informing,” says Dr. Zena Ntiranyibagira, a Burundian translator and writer for Karibu News, who last year contributed an article about the education of children in Buffalo’s Burundian community. “When you’re reading in your own language, you connect easier. It’s almost like you’re speaking your mother tongue.”

Karibu News is primarily published in English, but different sections — depending upon the specific cadre of the immigrant community the story relates to — appear in different languages and scripts, giving the paper a collage-like aesthetic. It covers a wide range of topics, including immigrant legal issues, cultural news, home security, and even citizenship information. While there are many other foreign language newspapers for various ethnic communities within the U.S., this model is unique it that it features different languages in the same print publication.

“We’re trying to be a voice of refugees,” Mukunzi says of the team at Karibu, which means “welcome” in Swahili.

In 2015, Yar Swe helped write an investigative report on a series of burglaries that took place in the Burmese community, published in both English and Burmese. The publication of the story led to a town hall meeting in which the local police briefed the community.

Karibu News also helps other Buffalo residents learn about the refugees and where they came from. One recent report explored the plight of the Rohingya, a Muslim population in Myanmar, who are not recognized as citizens there, and are denied many rights, such as voting, and face numerous restrictions from the government on marriage, family planning, education and freedom of movement. This has caused them to flee the country since the late 1970s and seek refuge in neighboring Bangladesh, Thailand, and, often, Malaysia. In a recent surge of attacks by the Myanmar army this past weekend, close to a hundred people were killed in what local sources have said were indiscriminate shootings by the army.

“A lot of Americans don’t think about Myanmar, much less about the Rohingya community there,” Eva Hassett says. “And Karibu can help both sides of that equation; it raises awareness and gives information about what’s going on in the world and how it affects our neighbors.”

Other topics vary from LGBTQ issues to pieces from refugee children about their experience adjusting to the community. There’s even some poetry and cartoons.

The newspaper is published every two weeks, with a circulation of 5,000. There is a team that delivers the papers to different places, including resettlement agencies throughout the city.

“It’s a paper that everybody can read,” says Hassett. “It’s not mine or yours; it’s a shared experience.”

For contributors such as Yar Swe, who primarily translates for the newspaper, it’s a good source for freelance work, but he worries that the newspaper will run out of money soon. Despite its success, Mukunzi says finances are always tight, a situation familiar to many publishers throughout the print news industry these days. The paper is free; advertising — for immigration services, advocacy organizations, and local companies — pays the bills for printing, delivery and freelance fees.

The International Institute of Buffalo advertises with Karibu News, and for executive director Hassett, the paper’s survival is important not just for refugee integration, but also to promote open-mindedness in the Buffalo community.

“Imagine a little kid, who is American-born and doesn’t speak any other language other than English, getting to look at what Burmese writing looks like,” Hassett says. “That’s going to change that child.”