Who's the biggest loser? Ranking Hillary Clinton among the also-rans who won the popular vote

Hillary Clinton wasn't the first to win the popular vote and lose the election. But her case is different somehow 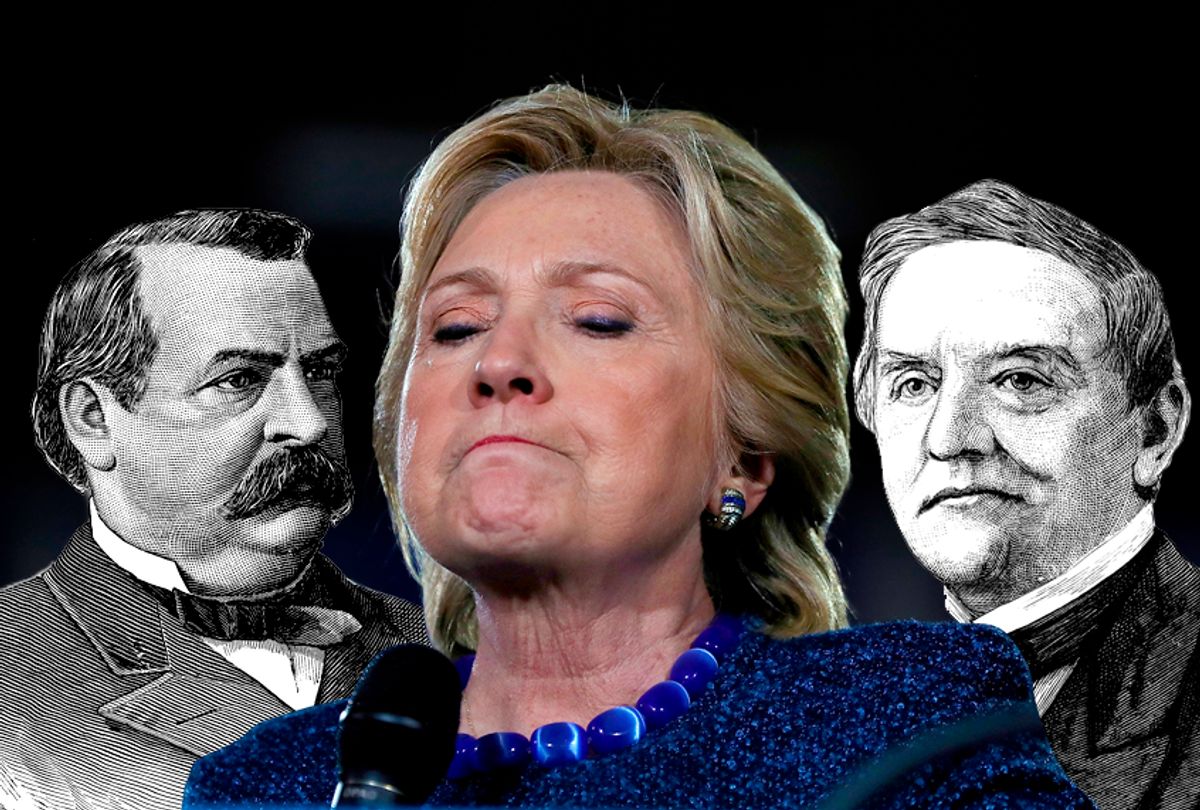 As America prepares to hear Hillary Clinton's side of the story regarding the 2016 presidential election, many pundits are proclaiming that she should no longer be taken seriously in politics today.

Considering her unique status as one of a select group of presidential candidates who won the popular vote but lost the electoral count, this reaction is curious, to say the least.

At least officially, there have been five presidential candidates who won the popular vote but lost in the Electoral College: Andrew Jackson in 1824, Samuel Tilden in 1876, Grover Cleveland in 1888, Al Gore in 2000 and Clinton in 2016.

That statement comes with a few qualifiers. Because African-Americans were systematically denied the right to vote in nearly a century's worth of presidential elections (from 1868 to 1964), we can never know for sure how the popular vote counts in any of those contests would have turned out under a fairer system. In many presidential elections during the early history of the republic, electors weren't chosen by direct popular vote in any place. As recently as the 1960 presidential election -- an exceedingly tight race between John F. Kennedy and Richard Nixon -- convoluted rules in certain states meant that either candidate could theoretically have won.

Those points aside, there are at least five occasions in which we know for sure that the candidate preferred by a plurality of those who cast votes did not become president. That carries considerable symbolic significance, considering that the United States presents itself to the world as a beacon of democracy.

Hillary Clinton, it seems to me, is being treated differently than the four men who came before her.

The most fortunate of the bunch, of course, were Jackson and Cleveland, since each of those losers was elected president the next time around (in 1828 and 1892, respectively). Although Samuel Tilden suffered some hits to his reputation thanks to a smear campaign launched against him after the 1876 defeat, his esteem among Democrats was high enough that he would most likely have been the party's nominee in 1880 had he not dropped out due to his declining health.

Those are all 19th-century examples, of course, drawn from a drastically different period in our political history. But even Clinton's most recent analogue received considerably better treatment. After Al Gore's controversial loss to George W. Bush in 2000, he had a 56 percent favorable rating in opinion polls (versus 40 percent unfavorable). That declined somewhat by 2002, when Gore decided not to run in 2004 in order to focus on his newfound role as a climate-change apostle, but he was still at a reasonably healthy 46 percent favorable and 47 percent unfavorable rating.

By contrast, Clinton's most recent breakdown was 41 percent favorable and 57 percent unfavorable, while a December poll found that a walloping 62 percent of Democrats don't want her to run again in 2020. (She recently announced that she would not do so, and that her career as a political candidate was over.)

So what gives? Why is Clinton faring so much worse than Jackson, Tilden, Cleveland and Gore?

To a degree, I think the answer defies quantitative analysis. To a much greater extent than any of her predecessors in this peculiar category, Clinton's presidential campaign was viewed as a sure thing. While the candidates who became president instead of the previous popular-vote winners -- they would be John Quincy Adams, Rutherford B. Hayes, Benjamin Harrison and George W. Bush -- don't exactly belong on Mount Rushmore, none of them was remotely comparable to Donald Trump. Each had previous experience in political office, and all fell within the ideological mainstreams of their respective parties.

Trump, on the other hand, was a former reality TV star with no political experience and little command of the issues, or knowledge whatsoever, who was identified with the racist fringe movement known as the alt-right. By any rational estimation, Clinton should have trounced Trump -- perhaps on the scale by which Lyndon Johnson defeated Barry Goldwater in 1964 -- and the fact that she couldn't pull that off no doubt explains some of the animus against her.

But it doesn't explain everything. It doesn't account for why many people seem apoplectic at the fact that Clinton has written a book explaining her version of events from the 2016 election. This brings me to the following passage from an editorial by John Stoehr at U.S. News & World Report. After listing the many valid observations that Clinton made about why she lost -- Russian meddling, James Comey's infamous October letter, the media's obsession with her emails and so on -- Stoehr observes:

It's not just her opinion, though. All of the above are empirically based. They are underscored by material or circumstantial evidence. In the case of Russia's campaign to move public opinion against her, Clinton echoes the consensus of nearly every U.S. intelligence agency. Yet when USA Today runs a headline like this -- "Hillary Clinton says Trump associates helped Russia meddle in the 2016 election" -- it sounds, ultimately, like sour grapes, and hence something the press can mock or ignore.

It's the elephant in the room that must be acknowledged. Again, it's impossible to quantify, but also impossible to overlook once you become aware of its presence. Passions may be running high after this election, but it isn't like passions weren't high after 1824, 1876, 1888 and 2000. People may be fatigued with Clinton, but quite likely they felt pretty sick of Samuel Tilden too.

Hillary Clinton is a woman, and the first woman to become a major party's presidential nominee. That's the inescapable X-factor. That doesn't mean Clinton gets a pass for her perceived scandals and clear political missteps. It's not a way of saying that her conduct during the 2016 campaign was stellar or that she shouldn't have learned how to reach out more effectively to constituencies whose support she badly needed.

But when you take a step back and look at the sheer vitriol being directed against Clinton for daring to speak her mind rather than shutting up and going away — after becoming one of only five people to win the most votes in a presidential election without being elected — it is hard to avoid the conclusion that she is being treated differently because she is not a he.