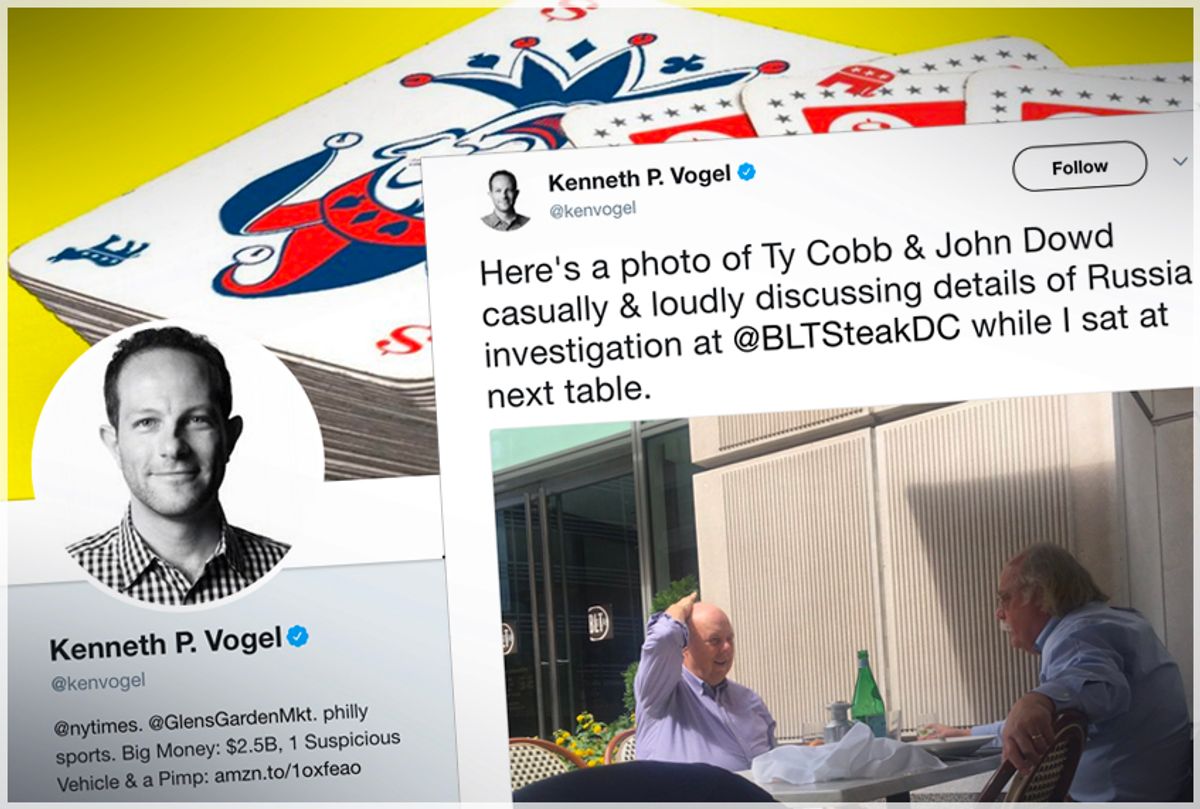 President Donald Trump may be focusing on how to wriggle out of the Russia scandal that threatens to envelop his administration, but in order to do that, his legal team will first need to get their proverbial house in order.

Exhibit A: The fact that Trump lawyers Ty Cobb and John Dowd were overheard by New York Times reporter Kenneth Vogel dishing over their frustrations with the administration's legal strategy.

Mr. Cobb was heard talking about a White House lawyer he deemed “a McGahn spy” and saying Mr. McGahn had “a couple documents locked in a safe” that he seemed to suggest he wanted access to. He also mentioned a colleague whom he blamed for “some of these earlier leaks,” and who he said “tried to push Jared out,” meaning Jared Kushner, the president’s son-in-law and senior adviser, who has been a previous source of dispute for the legal team . . .

“The White House counsel’s office is being very conservative with this stuff,” Mr. Cobb told Mr. Dowd. “Our view is we’re not hiding anything.” Referring to Mr. McGahn, he added, “He’s got a couple documents locked in a safe.”

Mr. Cobb expressed concern about another White House lawyer he did not name. “I’ve got some reservations about one of them,” Mr. Cobb said. “I think he’s like a McGahn spy.”

While Mr. Cobb advocated turning over documents to Mr. Mueller, he seemed sensitive to the argument that they should not necessarily be provided to congressional committees investigating the Russia matter. “If we give it to Mueller, there is no reason for it to ever get to the Hill,” he said.

Mr. Cobb also discussed the June 2016 Trump Tower meeting — and the White House’s response to it — saying that “there was no perception that there was an exchange.”

If that wasn't enough, Times reporter Ken Vogel brought the receipts: A photo of the two dining out in the ocean.

Trump's chief of staff, John F. Kelly, who has been trying to impose order and professionalism within the White House staff, was furious at Cobb and Dowd for their public indiscretion, according to the Times. Dowd does not work for the White House, but because Cobb does, he found himself on the receiving end of Kelly's wrath.

One of the underlying issues is that McGahn and Cobb disagree over the extent to which the Trump administration should cooperate with special counsel Robert Mueller III. While both lawyers recognized the importance of being forthcoming with the investigation, Cobb favored a much more liberal approach that he believed will exonerate the president and allow the cloud of the Russia investigation to dissipate. McGahn, by contrast, was concerned that excessive cooperation could set a negative precedent that hindered Trump's ability to maintain his executive independence later on in his presidency — and could harm future presidents in that same way as well.

As a result of this internal clash, it has been difficult for Trump's legal team to come up with a cohesive strategy, causing many within the White House to distrust one another. It doesn't help that Trump has a reputation for not following his lawyers' advice, which initially hampered efforts to even find attorneys willing to take on Trump's case.

The Cobb-Dowd meeting has particularly strong implications for the latter lawyer, who has made news in all the wrong ways before. Last month an email by Dowd was leaked in which Dowd defended Trump's infamous Charlottesville statement by defending General Robert E. Lee and insisting that Black Lives Matter had been infiltrated by terrorist groups.