Fall TV is in the Bad Place. So let's go to "The Good Place"!

Broadcast's new season is just dreadful. Instead, let's return to the shows that are working 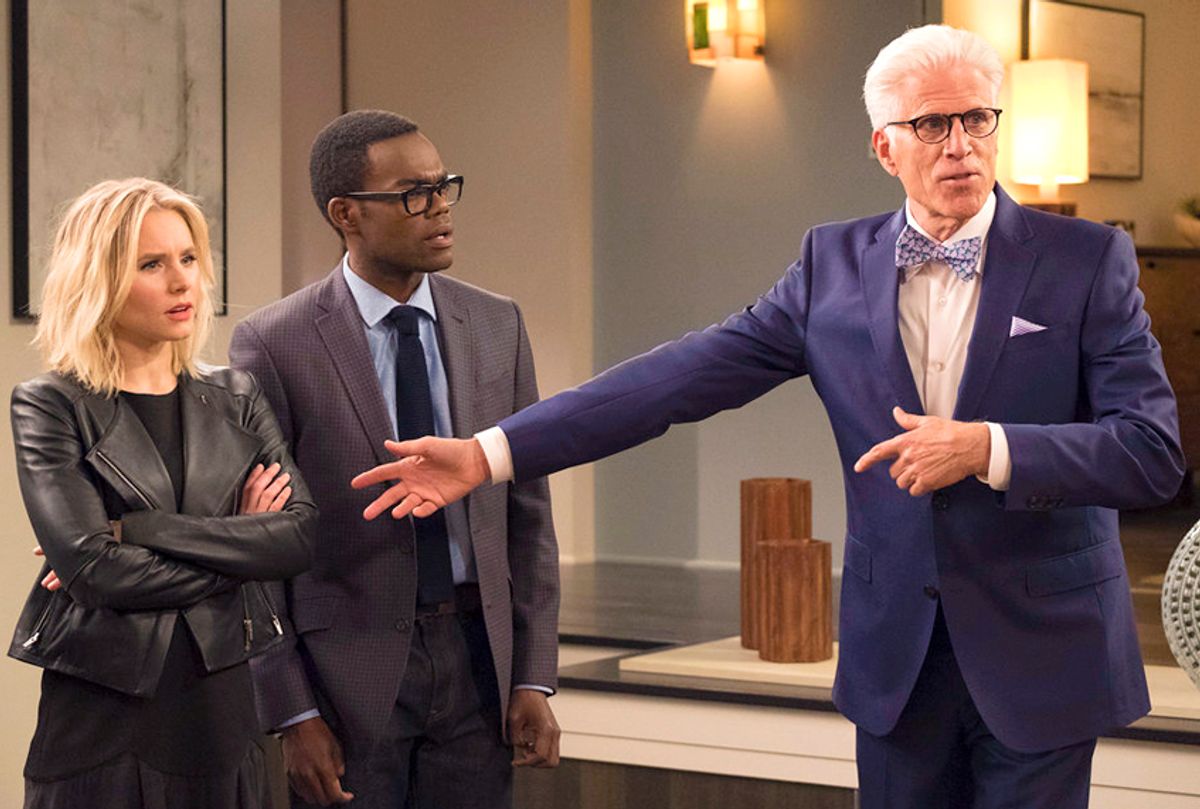 Based on my foggy recollection, the last time it was this bad was 2003.

That was the fall broadcast television gifted us with “Tarzan,” “The Mullets,” the Norm Macdonald vehicle known as “A Minute with Stan Hooper” and “Whoopi,” to name a few. Bless you if you don’t remember these shows, because some of us can never, ever forget they existed. Point being, it was bad y’all. Truly, madly, deeply terrible.

Regrettably this fall’s new slate is worse. Now, you may doubt that. I get it — I mean, “The Mullets,” right? What could be worse than that? Mediocrity. You see, as terrible as many of the offerings in the 2003-2004 season were, it was also the year that yielded “Arrested Development.” “One Tree Hill” and “The O.C.” debuted that fall, along with other decent dramas that in retrospect we should have appreciated more than we did, such as “Karen Sisco” and “Wonderfalls,” which debuted in midseason.

What we have now is a whole lot of valley with nary an incline in sight. There are a number of reasons this is the case, but some are obvious: Broadcast TV is currently operating in a narrow-cast world, relying on an increasingly outdated model still heavily dependent on raking in large audiences to meet advertiser expectations. That means series that aim for the middle and offend as few as possible get the green light, which can be a creativity killer.

During a year with hundreds of new options available to viewers, a show needs to make some noise if it’s going to survive. None of the new series do, at least in the initial episodes made available to critics. A few of last year’s options did, though you may have noticed what with the Hellmouth slowly yawning open.

But that was a year ago, and we’ve gotten used to life on the end of fiery oblivion. Hence, lacking better new options, now’s a great time to go reconsider a couple of last year’s series embarking upon their second seasons, starting with NBC’s “The Good Place,” kicking off its second season Wednesday at 10 p.m. with an hour-long episode.

You may have tuned in to the comedy’s very first episodes and perhaps found its comedy and conceit to be charming and little else. That’s reasonable. In many ways “The Good Place” fulfills the obligations of a broadcast comedy — not exactly shocking, given creator Mike Schur co-created “Parks and Recreation” and was a producer on “The Office.”  But with “The Good Place,” Schur takes the concept of inoffensiveness to absurd places. Its vision of a flawless afterlife is populated with endless frozen yogurt shops, where soul mates matched by some type of spiritual algorithm and denizens are physically barred from uttering vulgarities.

Even its foul-mouthed main character Eleanor Shellstrop (Kristen Bell) can’t drop all the f-bombs she typically carpets her conversation with. In this version of the afterlife, as designed by its benevolent architect Michael (Ted Danson) nothing can be forked up. And to Eleanor, that’s a pile of bullshirt. She knows she is definitely a bad person who doesn’t belong there, especially in comparison to her soulmate Chidi (William Jackson Harper), a philosophy scholar, and Tahani (Jameela Jamil), a philanthropist. Soon enough she finds another anomaly in Jianyu (Manny Jacinto), who supposedly is a Buddhist monk but is actually a hoodlum from Florida.

Now, you may have tuned in to “The Good Place” last year and thought to yourself, “Well, that’s adorable” before turning away. And I get that, what with that sphincter to the Upside Down puckering in the background. However, one distinction that raises “The Good Place” above the other network din is the way that it ended its first season which essentially transformed the show.

Here is where we’ll pause for the sake of people who haven’t seen “The Good Place,” but might be curious about it — which is a fine instinct — but might be worried that it’s too late to catch up on it before Wednesday night’s debut. It’s not! You can easily watch the first two episodes of season 1, and its final pair, episode 11 and 12, and be up to speed for Wednesday’s season premiere.

So stop reading and head over to Hulu or NBC.com, where the first season is available to stream for two more days. After that you’ll have to pay for it. And now, if you insist on continuing to read, you will be spoiled.

Got it? Do you understand that there are spoilers ahead?

See, the delicious evil of “The Good Place,” the hidden detail that makes it such a gem worth picking up in season two, is that the entire premise is a lie. Michael’s not an angelic architect, but a soulless demon who devised this bland paradise as a way of torturing Eleanor and her companions for all eternity. The first season finale paved the way for a reboot that takes several episodes to settle in this new season but basically remakes the series into a tongue-in-cheek indictment of the office politics and the ruthlessness of middle management. Viewers familiar with a hellish workplace may find incredible comfort in this new season that allows Danson to turn on his rakish appeal a little more, augmenting his already considerable chemistry with Bell.

Some series take time to a larger audience, and perhaps this current stew of meh dominating the fall menu will help sophomore successes like “The Good Place” taste all the sweeter. God, I hope that’s true, because in a season as disappointing as this one, we could really use something to believe in.