Low Emmys ratings: No, Kellyanne, it’s not because of Trump jokes

Stephen Colbert's "Late Show" is a ratings rocket; dragging Trump around can't be too bad for business 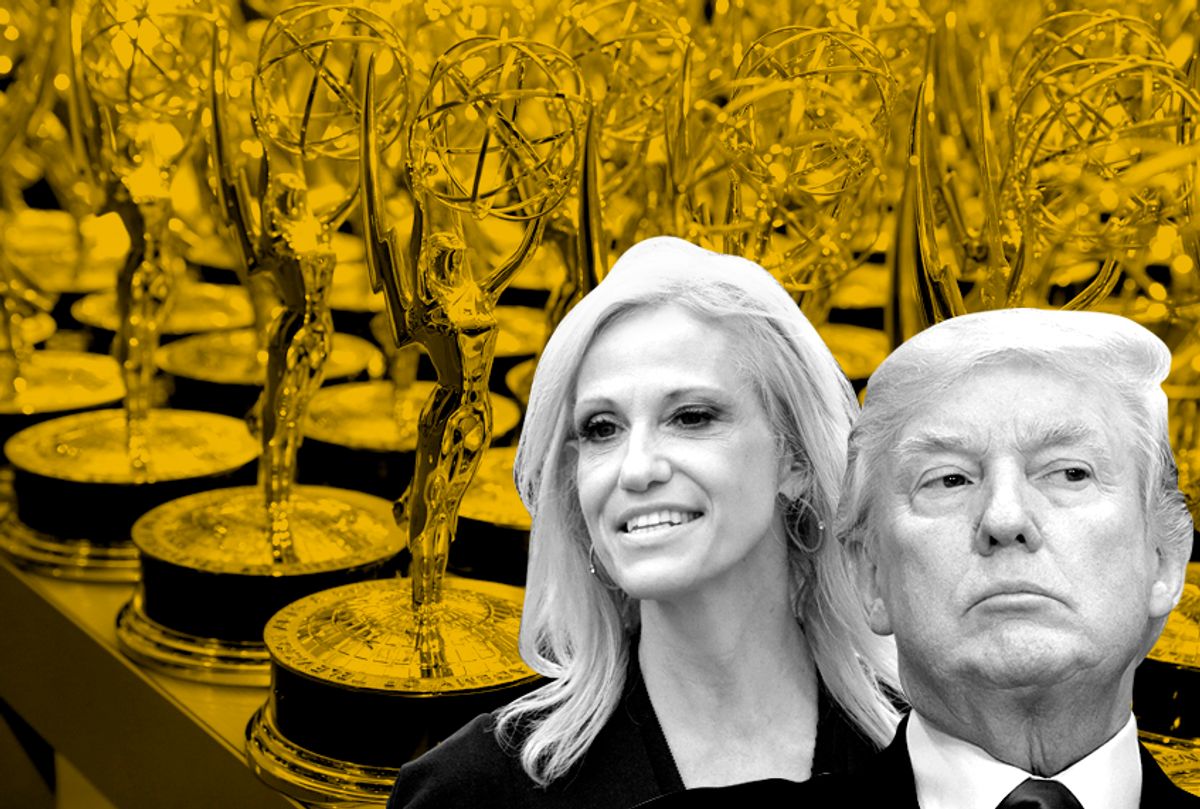 Kellyanne Conway knows how to please her boss. The morning after an Emmys Awards ceremony that repeatedly took aim at President Trump, Conway appeared on “Fox & Friends” and fired back using one of Trump’s favorite success metrics: ratings.

Unlike, say, the Trump administration’s claims about inauguration crowd size — claims which, incidentally, Sean Spicer was allowed to laugh about during the awards show as though the lie had all been in good fun — Conway’s ratings claims weren’t wrong. Big American cultural events have become increasingly politicized and in many cases television ratings for these shows have dipped. Sunday night’s Emmys was the latest example. The 69th rendition of the awards show was viewed by 11.38 million people, tying last year’s record low viewership.

But correlation is not causation. We don’t know precisely why viewership was so low, but here are a few things we do know: First, the number of pay TV subscribers has been falling at fairly steady rate since the second quarter of 2014. Cord cutting has been most pronounced among viewers under 50 years old. And Sunday night’s Emmys ratings were down 19 percent in the key demo (adults aged 18-49). Secondly, the devastation from Hurricane Harvey and Hurricane Irma left significant markets in Texas and Florida with limited access to television. Finally, the Emmys was up against a rematch of last year’s NFC Championship game.

The third explanation may have had an impact on Sunday night’s Emmys ratings but larger forces are at play. The Emmys goes up against a prominent NFL game every year, after all. And Conway wasn’t just talking about Sunday night’s Emmys broadcast. She also mentioned the Miss America Pageant and sports. This year’s Miss America Pageant, which aired September 10, also suffered a loss in ratings. As has the NFL this season. As has ESPN. Competition from the NFL can’t be blamed for all of those declines.

So what about political fatigue? Conway’s claims — an echo of Trump’s claims following Jemele Hill’s critical tweets — posit that viewers are turned off by the politicization of entertainment, “politicization” being tantamount to “negative coverage of Trump.” A significant portion of polled sports fans (26 percent) last year attributed their watching fewer games to the national anthem protests.

But what then to make of the gains other shows have made by being obsessively political and/or critical of President Trump? Stephen Colbert’s “Late Show” ratings boom has coincided with Trump’s election. He’s ostensibly struck ratings gold by making fun of Trump. Just as Jimmy Fallon has purportedly suffered because he’s been too soft on Trump. And in sports, the fight between Floyd Mayweather and Connor McGregor earlier this summer was overtly political and it was a monetary bonanza.

Political fatigue may very well exist, but television executives at CNN, CBS  and Showtime alike will attest that, in Trump parlance, DJT still has the power to be a ratings machine. For good but mostly for ill, Trump’s name and presence has the power to do what has become increasingly rare: make large numbers of viewers tune into a given televised event. But when ratings dip in line with declines in cable subscribers, it’s probably in spite of rather than because of a focus on Trump. Which, if framed the right way, should have the same effect as what Conway said: It should soothe Trump’s fragile ego.