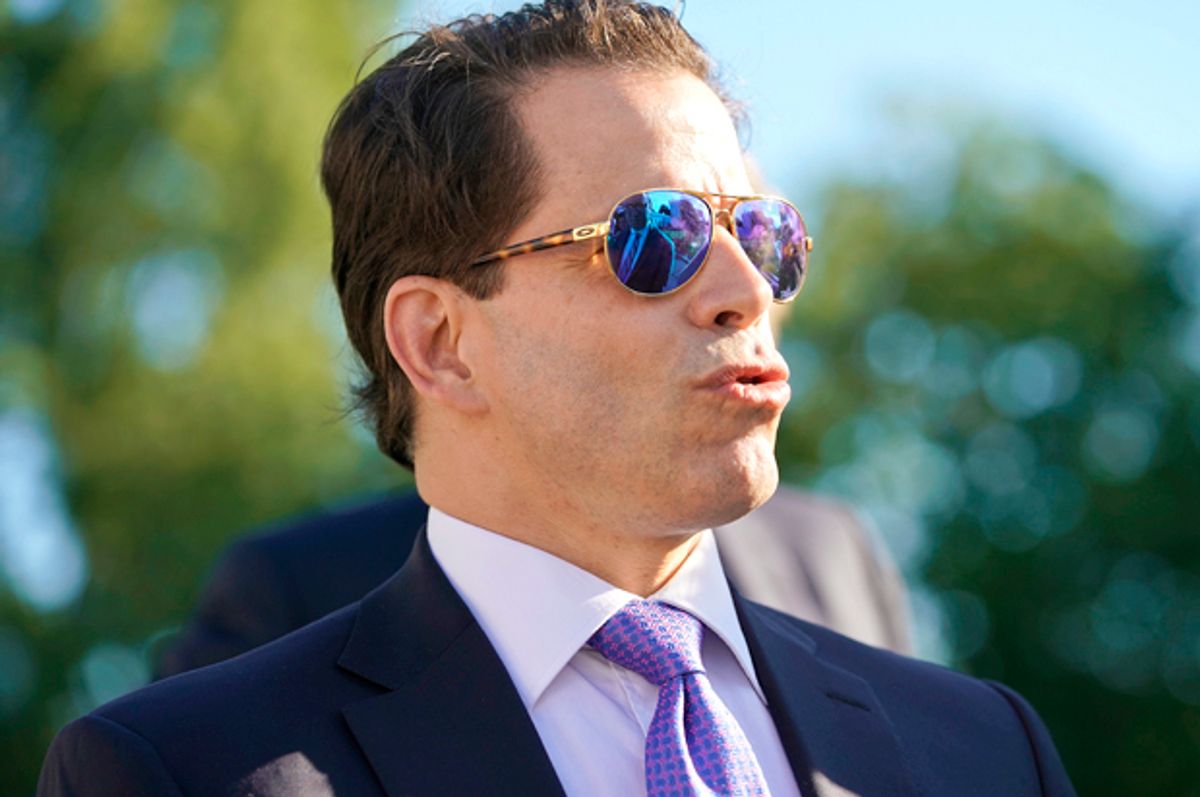 Former White House communications director Anthony Scaramucci continues to employ the same big, boisterous mouth that made his term in the administration of President Trump so very memorable and so very, very short.

Today, while making a guest appearance on the web show of gossip website TMZ, the Mooch intimated that New England Patriots quarterback Tom Brady skipped an April team visit to the White House in honor of its Super Bowl win because maybe — just maybe — the player's supermodel wife, Gisele Bündchen, was concerned he might run off with First Daughter Ivanka Trump. Yeah.

Under grilling from TMZ boss Harvey Levin, Scaramucci, who was not employed by the White House at the time of the Patriots' visit, said "Somebody should ask Gisele why Tom Brady didn't show up at the championship party."

When Levin pressed Scaramucci for details as to why one should ask the supermodel, Scaramucci fumbled through a roundabout explanation. "You know, my guess is, is that that — uh — you know, that there could be some — ah — which is typical, I mean there could be jealousy there, protection and possession of Tom Brady and, and she probably didn't want him to go."

Levin, to his credit, tried to nailed down exactly what Scaramucci was trying to intimate through his words and hand gestures. "Protecting from what?" he asked. The Mooch replied: "I just, just think she's possessive of him, they probably have a great relationship, and she probably didn't want him there."

Again, pressed to explain why that matters, the Mooch offered this: "I don't know, maybe there was a relationship between him and Ivanka at some point, I have no idea, I don't know the real reason . . . I'm not one of you guys, I'm not an investigative journalist who snoops around on these people, I have no idea."

When asked why he brought up Ivanka — who has been married for eight years — Scaramucci said "Maybe it wasn't her, maybe it was somebody else. I don't know. I just think there's a possession there that, you know, caused a rub."

Gosh, there's so much here. Rumors that Bündchen, who is purportedly liberal in her politics, did not want Brady to join the event cropped up almost the moment he failed to show at the White House in April. At the time, his representatives claimed that the quarterback was attending to "family matters."

We should mention Brady and Trump have spoken about their longtime friendship, though the quarterback's political statements about the president and his campaign are often contradictory and hard to interpret. Bündchen's statements on the matter are far more emphatic. It should also be noted that many of his teammates also chose not to make the trip for their own reasons.

Nowhere in a very brief and cursory look at even semi-reliable sources is there any mention of a previous relationship between Brady and the president's daughter. That said, Mr. Trump did tell Playboy in 2004 that he felt the two "would make a great combination."

More than anything else, the moment demonstrates what Scaramucci — whose credibility is only slightly north of nil — was and is: A fully New York-styled PR huckster used to selling unattributed stories about bold-type names to Page Six with a "I dunno, could be," a "you, know, I heard that," or a "not for nothin', I'm just sayin'." In short, he was this president's perfect pitchman, a mirror of the man himself. They must miss each other.