After dispersing demonstrators protesting the acquittal of a police officer, cops co-opted a resistance anthem 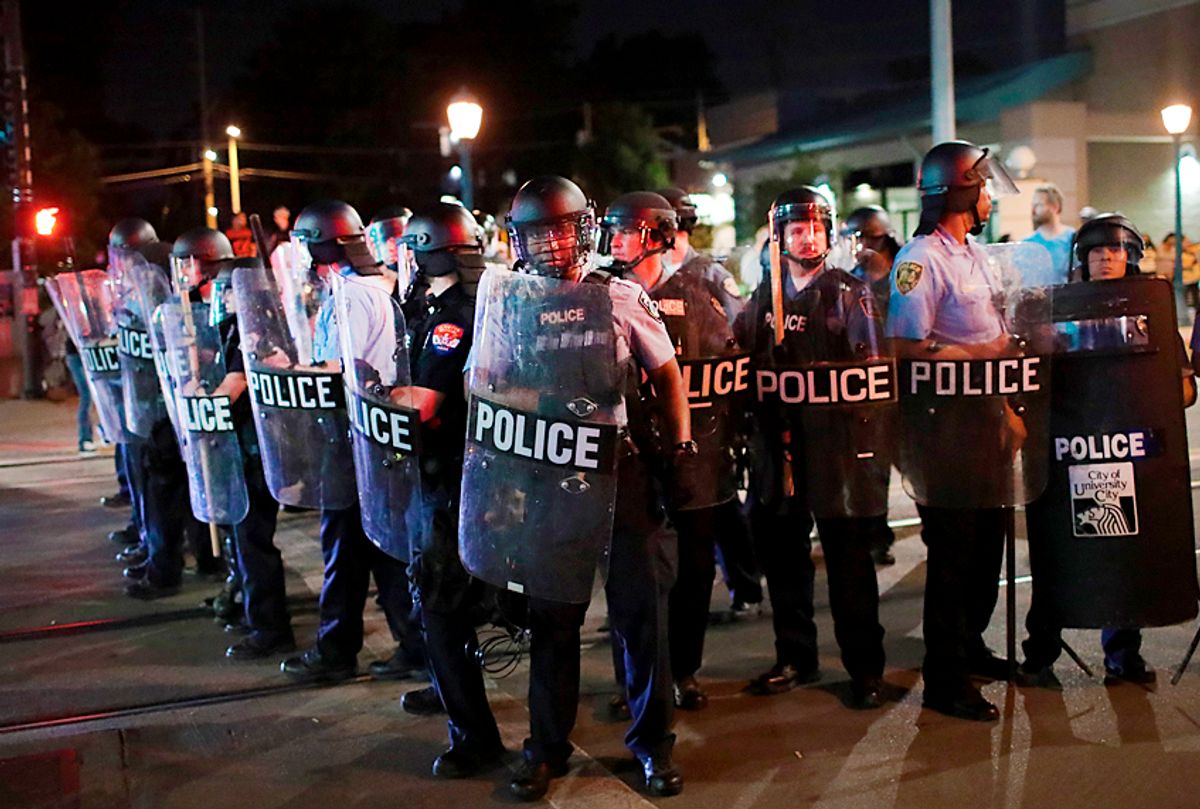 Sunday night in St. Louis, Police officers dressed in riot gear, chanted "Whose streets, our streets" after dispersing demonstrators who gathered to protest the acquittal of a white police officer in the killing of black motorist Anthony Lamar Smith. The chant has become a mainstay of resistance marches against police brutality and other systematic miscarriages of justice exacted against African-Americans, though white nationalists also co-opted it during the bloody rallies and riots in Charlottesville, Virginia last month.

Protestors massed Friday and throughout the weekend after a judge absolved former officer Jason Stockely of the death of Smith. Stokely shot Smith five times at the end of car chase in 2011. A dash cam captured Smith saying he was “going to kill this motherfucker, don’t you know it,” shortly before firing on Smith. Stockley's lawyers argued the officer saw Smith with a gun and was in danger and overcome with "human emotions." "Prosecutors said Stockley planted a gun in Smith’s car after he shot him," the Guardian reported.

Tensions were high as residents of the St. Louis community reckoned with what felt like no justice or accountability for the death of Smith. Many drew almost unavoidable parallels to the police killing of black teenager Michael Brown in nearby Ferguson almost three years ago. The officer who fatally shot Brown, Darren Wilson was also acquitted in that case.

Following this weekend's protests, authorities said they made some 80 arrests after demonstrators refused to disperse. The police also claimed that peaceful protests during the day turned destructive by night, according to the Guardian.

Police officers were bused in to manage the protests, after reports of property damage and vandalism. It was after more arrests and St. Louis boulevard was cleared, that officers began to chant the phrase: "whose street, our street."

Despite police claims, it appears that majority of protestors engaged in peaceful demonstration, expressing frustration that their work was being defined by a few agitators. The Guardian reported that "State representative Bruce Franks, a Democrat who has participated in the peaceful protests, said those who are violent 'are not protesters' but a group separate from those marching in organized demonstrations."

Some protestors argued that it was the intervention of the police — many of whom showed up in riot gear with armored, military-style vehicles — than provoked an aggressive response. For many over-policed black communities, the presence of police responding to protests in force can be traumatic, triggering and escalating.