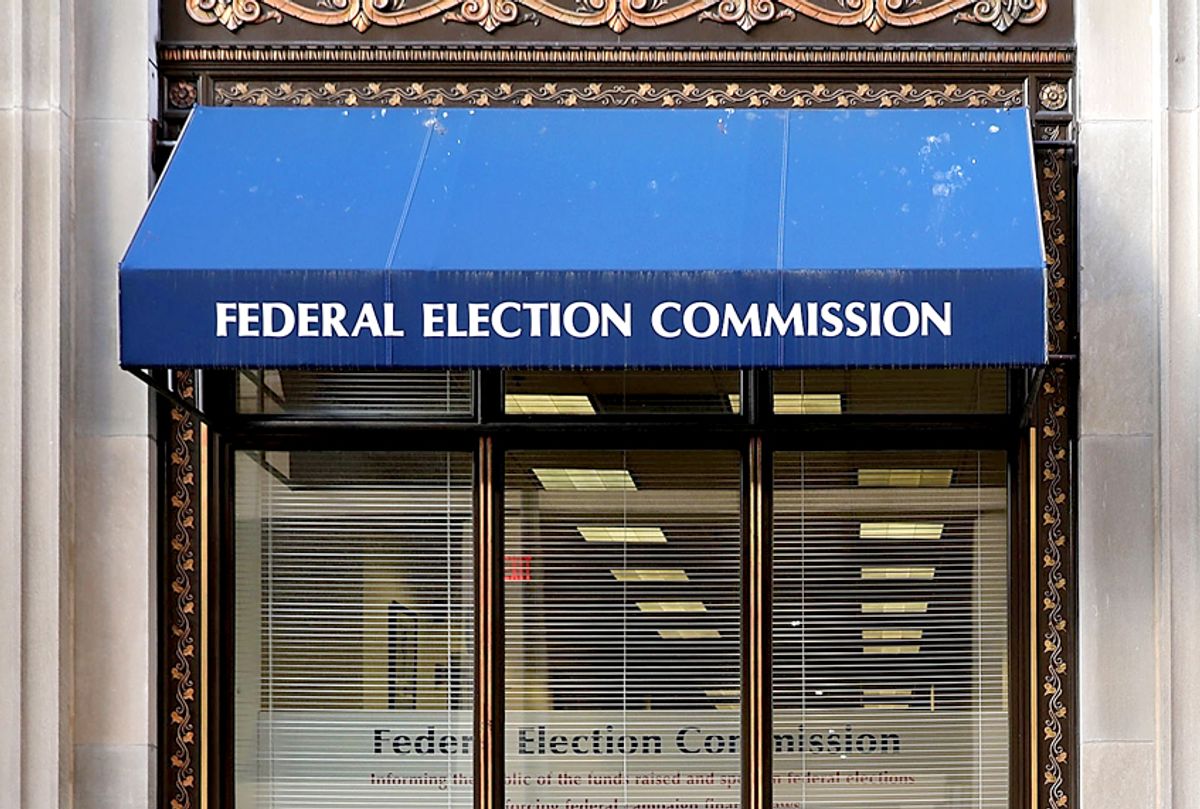 Donald Trump is already notorious for appointing people to lead federal agencies who are opposed to the very purpose of that agency, such as Scott Pruitt at the EPA or Rick Perry at the Department of Energy. But his nomination of Trey Trainor, a far-right lawyer from Texas, to sit on the six-member panel at the Federal Election Commission (FEC), is egregious even by Trump's standards.

It's doubly troubling because the FEC is one of the few bulwarks Americans have against corrupt campaign spending in the 2018 and 2020 elections. It's an issue that has become even more urgent in the face of increasing evidence that Russian operatives pulled out all stops to get Trump elected in 2016.

Trainor is “a defender of dark money, secret money," who opposes campaign finance disclosure, Adam Bozzi, the communications director for End Citizens United, told Salon. “No one’s fought against transparency in Texas as much as he has.”

During his routine fights with the Texas Ethics Commission, the Lone Star State's version of the FEC, Trainor would repeatedly compare "the plight of wealthy oilmen in West Texas to poor African-Americans in Alabama who would have the KKK show up on their lawn if they knew they were members of the NAACP," explained Scott Braddock, a Texas journalist who runs a popular political newsletter in Texas called the Quorum Report.

Before buddying up with Trump and joining the administration as an assistant to Defense Secretary James Mattis, Trainor had a lucrative law practice centered on concealing the identities of wealthy Texas conservatives who spend a lot of money trying to gain control of the state Republican party, mainly by backing Freedom Caucus types and targeting party leaders, such as Republican State House speaker Joe Straus, whom they deem insufficiently right-wing on their pet issues.

Braddock provided Salon with tax documents from a group called Empower Texans, which blandly bills itself as a group to "educate and inspire Texans to exercise effective citizenship," but is part of a larger network of organizations, including the Texas Public Policy Foundation, set up to support far-right pressure campaigns on the state Republican party. The Texas Ethics Commission wanted Empower Texans to identify its donors, arguing that it qualified as a political group. Trainor aggressively fought to stop that from happening.

Empower Texans, which is the state's highest spending dark money group, paid Trainor's law firm more than $1.3 million in 2014-2015, which was over a third of Empower Texans' revenue in those years.

“It’s pretty clear that they do not want to disclose who all their donors are," Braddock drily noted.

One of the most prominent politicians Empower Texans supports is state Rep. Jonathan Stickland, who has made it his life's mission to bedevil Straus for deficient levels of right-wing nuttery. Stickland has also captured headlines by nearly starting a fistfight with a fellow Republican he felt was soft on abortion, hanging a "former fetus" sign in the Texas Capitol building, and writing, "Rape is non existent in marriage, take what you want my friend," on Facebook. (Stickland, who was a 25-year-old married father when he wrote that, blamed immaturity for the posting.)

Trainor is good at his job. After a four-year battle, the Texas Ethics Commission threw in the towel, giving up its fight to force Empower Texans to disclose its donor rolls.

Trainor's nomination would be awful in the best of times, but right now it's especially troubling, both because of existing dysfunction at the FEC and because of the increased threat of Russian meddling in American elections.

The FEC is an agency "with a critically important mission that has unfortunately been hobbled by people in positions to make a difference" who don't like that mission, said Stephen Spaulding, the chief of strategy at Common Cause and former special counsel to Ann Ravel, who recently left her position as a panel member of the FEC.

The three Republicans currently sitting on the FEC, Spauldng said, "have been able to block any efforts" the organization could take to "handle the threat that we now know infected the 2016 presidential race."

In July, Politico Pro reported that Democratic FEC commissioner Ellen Weintraub was pushing the agency to do more to prevent foreign agents from spending money on American elections, "but Republican commissioners concerned with jumping into the Russia ‘frenzy’ urged caution as the commission proceeds."

The FEC finally reacted this week to the news about Russian operatives buying ads on Facebook by scheduling a hearing, but there are continued concerns that the Republicans on the panel will do as little as possible to deal with this problem.

Republicans have a majority on the current panel, even though FEC regulations bar any party from having more than three seats on the six-member panel are supposed to prevent that problem. But after Ravel resigned in March, that left the panel with three Republicans, one Democrat, and one independent. Trainor is expected to replace one of the two Republicans who are likely to depart soon, but so far the Trump administration has not offered anyone to fill Ravel's seat.

Trump has hastened to make sure the Republican seats are filled but hasn't moved to fill the non-Republican seat, more evidence that Trump is manipulating the commission's makeup so as to minimize its willingness to interfere with dark money forces — even if they come from foreign powers.

Trump's White House counsel, Don McGahn, was also an FEC commissioner, appointed by George W. Bush. During his sixt-year term, McGahn "led the successful conservative effort to neuter the agency, with the result that today it is unable to respond to even seemingly egregious violations of campaign finance law," Zachary Roth of MSNBC wrote in March 2016, in a piece looking at McGahn's influence in the Trump campaign.

McGahn recruited Trainor to help Trump at the Republican National Convention, and it's likely that McGahn played a role in picking Trainor for the FEC position.

"One way to keep bad actors from trying to break the law is by putting robust disclosure requirements in place," Ellen Weintraub, the sole remaining Democrat on the FEC, wrote in a Washingtonttt Post op-ed on Thursday. Otherwise, she argues, "foreign powers have the will to disrupt the American political process — and the ability to do it invisibly."

By picking Trainor, a man who has spent his career fighting robust disclosure requirements in campaign finance, Trump has made it clear that he wants an FEC that is unable and unwilling to do the work required to keep dark money out of the American political system. Considering what a massive fluke Trump's election victory was — he won by a margin of 80,000 votes spread across three states, fewer people than fill a football stadium — it's not surprising that he is pressing every advantage, no matter how corrupt and undemocratic, he can get in advance of the 2020 election.

Trainor's law firm did not respond to request for comment.