Famous men accused of sexual abuse are all over the headlines, but will that change anything?

When we talk about Bill O'Reilly, R. Kelly, Charles Payne and other abusers, do men even hear it? 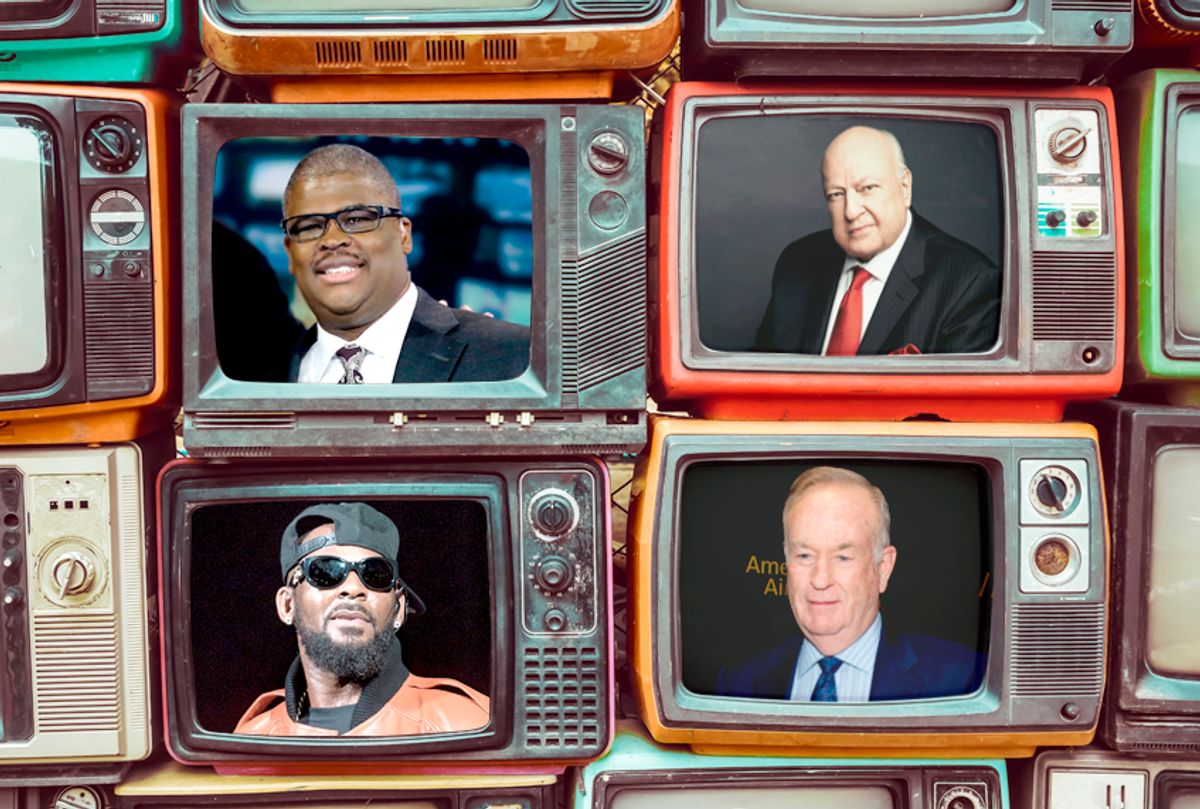 The last 48 hours has been filled with narratives, stories and headlines all pointing back to the violence men enact on women. I'm not sure if the sheer volume is amplifying the voices of the survivors or deadening them, but it hurts either way.

There's the political commentator Scottie Nell Hughes, who told the New York Times allegedly that she was raped twice by Fox Business anchor Charles Payne, and as of Monday is suing the network.

There's former Fox host Bill O'Reilly who has now adopted a "victim" posture after being fired over accusations of sexual harassment. He defiantly declared on Sean Hannity's radio show that he would clear his name.

There's the woman who accused R. Kelly of statutory rape, and who delved into her alleged assault on "The Real," detailing how she says Kelly physically assaulted her and another woman "trained" her and other young girls how to sexually please the singer.

There's Fox co-founder Roger Ailes who was memorialized during the 69th Emmys Sunday, despite the upwards of 20 sexual harassment allegations that forced his resignation from the network last year.

It feels as if headlines like these are coming more and more frequently of late — though it's more likely that we're starting to see the magnitude of the sexual abuse and harassment that women experience on a daily basis reflected in the news than it is due to an uptick in this behavior. Really, all these numerous accusations are simply part of a culture of sexism, misogyny and violence that exacts little to zero accountability on the part of men than they are anything out of the ordinary. It's only that the dynamic is heightened when the accused or the accuser is someone of stature.

Given the coverage, given the ways we absorb and react to it, there's an argument to be made that the media and the public may be more inclined to listen to women now than before. Yet, in a system where the burden of proof in acts of violence against women — sexual or physical — falls on the victims, are we starting to actually believe them?

It seems social media has made a new space for female victims of violence to be heard; maybe even to be believed. It provides an independent platform and the ability for survivors to share and distribute their stories on their own terms. A great example is former Uber employee Susan J. Fowler who exposed the company's alleged culture of sexism and harassment towards woman in a blogpost published to her website. Many attribute the forced resignation of Uber's CEO Travis Kalanick to Fowler's testimony. Yet, while the unshamed Kalanick may not have a job, Uber is still making him a billionaire, and the company continues to engage in offensive and sexist practices.

What is deeply frustrating is that it is not at all clear whether the newfound reach and exposure of harassment stories and accusations have or will deliver any substantial consequences or cultural transformations.

Brock Turner raped a woman who was unconscious, who has said publicly that she will likely be traumatized for the rest of his life. He spent a mere 92 days in jail. Hughes alleges that Payne raped her and forced her to continue a sexual relationship against her will, and then was blacklisted from Fox after she finally reported her claims. Payne, who was suspended pending investigation, was cleared by the network and reinstated on television this month. Then, of course, the holy grail example: a businessman who was accused again and again of sexual harassment and assault, essentially admitted to doing so on tape, and then went on to become president of the United States.

I appreciate that some of our stories of surviving violence are getting attention, that they aren't being swept under the rug as if they never happened (as they were in years past). But when will it start to matter? When will things actually start to change?

Being believed is one step; a mighty step, especially when you remember that for every 1,000 rape cases filed, only 13 are referred to a prosecutor, and only about half of that number result in convictions, according to RAINN. But there's still so much more to be done. It's just not enough that the media is finally embracing our stories. The problem is not that we aren't reacting, it's that the men clearly aren't getting it. When almost every woman I know doesn't have personal experiences of sexual harassment or assault then maybe I'll talk about progress.

There is, at least among us women, a rising solidarity with survivors. More and more, we are acknowledging the scope of assault and, increasingly, refusing to share the blame for it (no matter how much men try to shame us into thinking we do). Right now, as it has always been, this conversation among us is important but insufficient: it's the men that need to change.