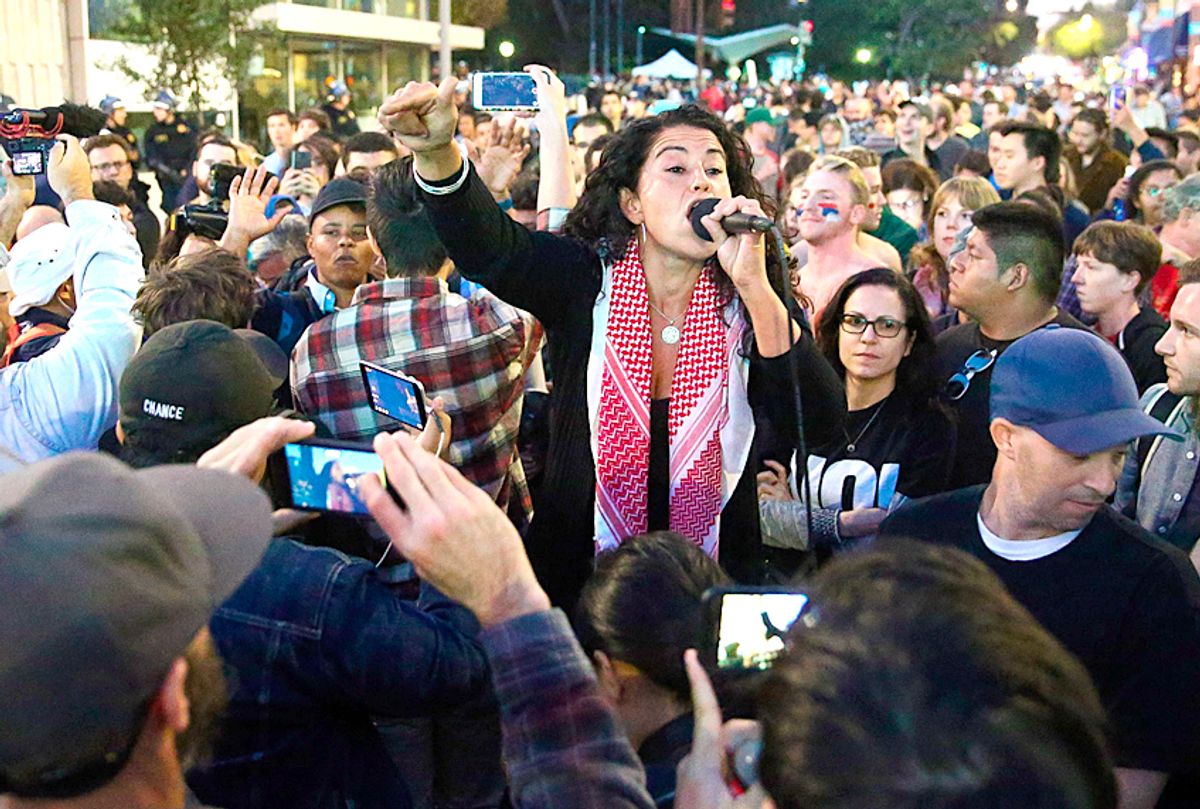 For the past decade, a local character named Frank Chu has wandered around the San Francisco Bay Area with a black protest sign featuring inscrutable phrases. “Shellley / 12 Galaxies / jextroxetikul seismograph,” read one of his signs photographed in the San Francisco Chronicle. The colorful, strange signs have made Frank Chu something of a local celebrity: he has his own Wikipedia entry, and has become a popular Halloween costume. Briefly, a local bar, “12 Galaxies,” named itself after his signage.

Although most people probably don’t understand Chu’s enigmatic protest signs, because he enjoys free speech, he is free to wave them where he pleases. And he is not obnoxious: no one pays for his words to be plastered on billboards or for him to speak to vast crowds at Berkeley. Frank Chu epitomizes free speech in this regard: he says what he wants. Yet his platform is not subsidized by a rich benefactor or shoved in the faces of those who dislike his ideology.

This is a key distinction, and it speaks to the current culture wars, where many on the right decry the left for “suppressing free speech” whenever a protest erupts over a far-right speaker, or antifa stages a counter-protest against a motley crew of alt-right and neofascists, as happened in Charlottesville. There are two separable phenomena going on here: first, the assumption that protesting constitutes a suppression of free speech (it doesn’t). People have protested speakers, artists, politicians, even the Beatles. A protest against a person does not constitute a protest against free speech itself.

But there is another misplaced argument when it comes to the terms on which we debate free speech. All of the current kerfuffles over “suppression” of free speech — particularly those in Berkeley, which celebrated Free Speech Week recently — ignore the fact that the speech that students are protesting is not really free in the sense of that word. It is paid-for speech, the promoted speech of conservatives given a platform by rich benefactors. There is a demonstrable difference between Frank Chu’s whimsical protest signs, and rich people forking over money to have those who share their oppressive ideologies foist their shared ideas on others.

The recently-protested speech by Ben Shapiro at the famously liberal campus falls into this category. Shapiro, a Breitbart columnist and co-founder of the Daily Wire, had his visit to Berkeley funded by a peculiar nonprofit called the “Young America Foundation,” which spent over $8 million bringing speakers to campuses around the country in 2015. The Young America Foundation donor list reads like a whos-who list of prominent American archconservatives, including the DeVos family and the Koch brothers.

So then, in what sense of the word is Ben Shapiro’s speech “free”? The only reason he was given an elevated platform in Berkeley is because of the funding of astonishingly wealthy far-right donors, who have an agenda to pursue, and know clearly that they will win on their terms by letting their speakers stoke protests, then publicizing a sophistic vision of the left “suppressing” free speech. Of course, you or I or a stranger who scrawls slurs on bathroom stalls will never be granted the privilege to speak in front of a comparable audience. Our speech may be “free,” but right-wing foundations aren’t paying us to speak in front of unwilling crowds. Doing so doesn’t benefit their rich benefactors, or advance their agendas.

Imagine the scenario turned on its head. Imagine if rich foundation backers paid to send, say, former Black Panther Bobby Seale to speak in front of a crowd at Bob Jones University. Comparable protests would erupt, as do when a Yiannopoulos or a Shapiro is foisted on the hyper-liberal city of Berkeley. Perhaps there would even be violence. And the hypocrisy of anyone on the right who claims to be a champion of free speech would be called into question, and they would mocked by liberals and leftists.

But this reverse scenario never happens, because there are no “leftist” rich benefactors that are sending leftist speakers into conservative bastions. Because the left is more into redistributive income and anti-elitism — the kinds of politics that the rich tend to abhor because it cuts into their power — the opposite situation is unimaginable. And so we are stuck in a cultural purgatory where, because of a misplaced popular narrative of what free speech means, the right has come to claim the mantle of a “free speech” that is about as free as a Super Bowl advertisement — that is to say, visible only because of the money that bought it. Free speech is free speech, but when mediated by the money of the rich, some people's speech is freer than others’.