Single-payer won't be easy for Democrats — but Republicans are helping 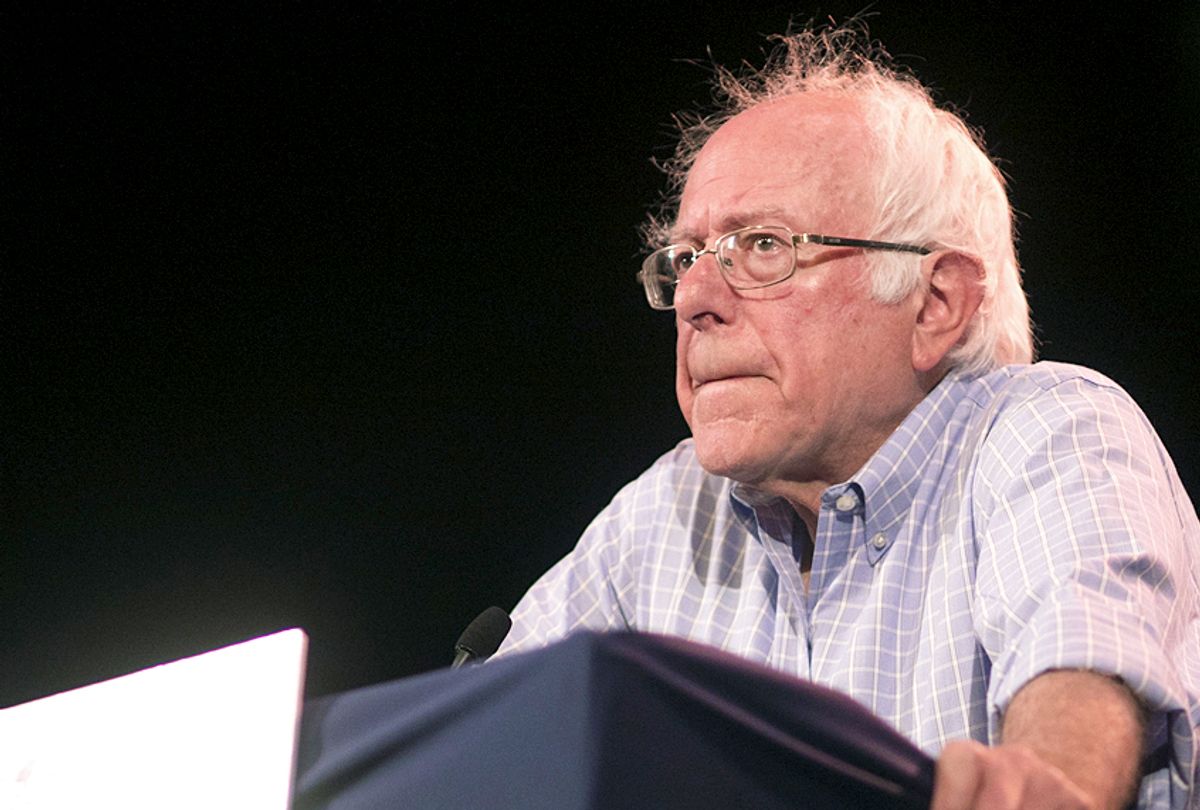 A week ago, Sen. Bernie Sanders unveiled his “Medicare for All” plan to provide taxpayer-subsidized health insurance coverage to every American. After decades of being one of only a few left-leaning elected officials supporting the idea, the Vermont independent has been joined by 16 Democratic co-sponsors, including several alleged presidential aspirants.

A huge part of why senators like Elizabeth Warren, Cory Booker, Kirsten Gillibrand and Kamala Harris decided to join up with Sanders this time is that Democratic voters appear to have moved strongly in favor of universal coverage provided by the federal government. In a June opinion poll by the Pew Research Center, 85 percent of Democratic-leaning respondents said they favored either a single program covering everyone or some mix of public and private services delivering that goal.

Among the public at large, 60 percent of respondents in the Pew survey said they favored some form of government-guaranteed health insurance. Even Republican voters have apparently come around to the idea to some extent. In a the Pew study, 30 percent of Republican-leaning respondents said they thought the federal government had a responsibility to provide health care to everyone, up from 14 percent who said the same in 2014.

Providing health care coverage to everyone is a popular idea right now, but that doesn't mean getting single-payer enacted is likely to happen anytime soon. A look at long-term polling trends on the subject shows that while people may agree with the concept of expanding coverage generally, support weakens considerably once specifics are discussed.

Surveys taken since the year 2000 have shown majority support for universal coverage. But from 2009, when the Affordable Care Act was first being debated in Congress, through January of this year, when Republicans began to seriously discuss repealing it, a majority of the public did not support the idea of universal coverage. Between November of 2009 and March of 2017, just 46 percent of respondents said the federal government had a responsibility to provide health care to everyone, according to combined survey data from Pew and the Gallup Organization.

Almost certainly, part of that opinion shift was due to Republicans falsely calling ACA “socialized medicine” that would implement “death panels” to kill grandma. That’s not the sole reason, however. A huge part of the resistance to Obamacare came from privately insured individuals who viewed ACA negatively because they were unable to keep their old plans or because their costs went up. Deciding how to finance a switch to single-payer, while maintaining current quality of care and approximately the same net costs for the majority of Americans who currently have private insurance, are significant obstacles that Sanders and his allies will need to overcome.

Implementing the idea could potentially save considerable money in the long term, because so much of current health care spending goes to overhead costs and insurance industry profits. In a Congressional Budget Office (CBO) study of single-payer’s potential impact way back in 1991, the agency estimated a budgetary impact window between a cost savings of 9.6 percent to increased expenditures of 1.2 percent. Single-payer went nowhere once Bill Clinton became president, however, because there were tradeoffs many people viewed as unacceptable at the time. “Individuals would have less freedom to choose their insurance packages,” as the CBO noted. “High-income people would probably pay more for coverage that might be less comprehensive than their current plans.”

In a 1993 analysis of a bill by the late Sen. Paul Wellstone, the CBO argued that costs “would raise national health expenditures at first, but reduce spending about 9 percent in 2000. As the program was phased in, the administrative savings from switching to a single-payer system would offset much of the increased demand for health care services. Later, the cap on the growth of the national health budget would hold the rate of growth of spending below the baseline.”

Still, there's no way around the fact that the early years of pretty much any single-payer proposal are likely to cost more.

In trying to avoid the mistakes Democrats made long ago when they tried to promote universal coverage, Sanders and his colleagues’ new bill does not describe how Medicare for All will be financed. In a separate document, Sanders’ policy staff discussed a variety of ways in which switching to single-payer could be financed, including a variety of new taxes. Analyzing an earlier version of Sanders’ proposal, the left-leaning Urban Institute estimated that it would cost $32 trillion over 10 years.

When asked about his legislation’s possible effects on the tens of millions of people with current private-sector plans, Sanders brushed off Vox reporter Jeff Stein, saying, “It’s not a question of switching plans.”

While few people are big fans of the health insurance industry, the uncomfortable reality for single-payer advocates is that poll respondents have long indicated that Americans are generally satisfied with their own individual and family coverage. According to Gallup research, when asked about their own insurance plans, significant majorities of respondents have always rated them as either “excellent” or “good.” While it’s true that people relying on government medical programs are most likely to be satisfied with the nation’s health care system, the highest percentage rating their own insurance as “poor” or “only fair” was 22 percent. In a more detailed Gallup survey conducted in 2015, the only group of people who said they were dissatisfied with the U.S. health system were those who were uninsured.

Lacking their own larger vision of health care policy, Republican politicians and campaign groups are salivating at the idea of tapping into Americans’ support for their current coverage and their hatred of tax increases.

The day after Sanders unveiled his proposal, Sen. John Barrasso of Wyoming, a conservative Republican, wrote an open letter to the CBO requesting a formal estimate of the cost of the legislation.

"I am deeply concerned that Senator Sanders’ Medicare-for-All legislation is not only a government takeover of health care, but would also put financial burdens on the American people that they cannot sustain," he wrote. "As the country engages in a serious debate about how best to reform our health care system, it is imperative that the public understand the cost of Senator Sanders’ Medicare-for-All proposal."

The National Republican Congressional Committee, the party’s official organization for supporting House candidates, has already put out a web ad attacking Sanders’ plan as an idea “so outrageous it could bankrupt the country.”

"I can tell you that single payer and the discussion surrounding single payer will be an ongoing theme in 2018. Democrats are bear-hugging single payer health care and we're going to make sure all voters know that,” Jesse Hunt, the group’s national press secretary, told The Hill.

Corry Bliss, executive director of the Congressional Leadership Fund, a political action committee controlled by the GOP leadership, says he and his colleagues are “absolutely ecstatic” about Democrats’ talk about single-payer.

“I think there’s a stark contrast developing: At a time when the Republican Party is focusing on cutting taxes, the Democratic Party is focused on adding trillions of dollars of spending and advocating for socialized medicine,” he said.

But while Republicans look forward to attacking Democrats’ plans for single-payer healthcare, the GOP’s manic desire to slash health care spending is only likely to increase public support for a government-run system. Any possible Republican bill to repeal or reconfigure the ACA is almost certain to increase the ranks of the uninsured, the only group of people who are dissatisfied with American health care. That dissatisfaction will become much worse if Republicans manage to take away coverage that people once enjoyed, either because they bought insurance on the "Obamacare" exchange markets or got coverage through the ACA's Medicaid expansion in many states.

In keeping with the GOP’s fundamental inability to understand that its ideological goals are politically suicidal when applied to health care, Sen. Lindsey Graham of South Carolina, the leading sponsor of the Republicans’ last-ditch effort to repeal Obamacare, seems to see his bill as a way to stop single-payer.

"If you want a single-payer health care system, this is your worst nightmare,” Graham said at a news conference held the same day that Sanders unveiled his Medicare for All measure.

All the political challenges facing progressive Democrats who want to push for single-payer will still remain should the GOP manage to pass its health care bill. But they’ll be more easily overcome once costs start going up and the ranks of uninsured Americans increase.

Ironically, the one person who might yet save Republicans from self-immolation on this issue is Sen. Rand Paul of Kentucky, a professed libertarian who is saying as loudly as possible that he won’t support Graham’s measure because it doesn’t cut spending enough. Whether out of principle or political calculation, Paul may ensure that the latest GOP effort to repeal Obamacare meets the same fate as all previous attempts.