U.S. college tuition is the highest in the world

Higher education costs in this country are out of control

The price of a college degree is more expensive in America than anywhere else in the world, according to a new report from the Organization for Economic Co-operation and Development. The OECD looked at public and private college costs in its 35 member countries and found that higher education is priciest in the United States by a significant margin. Business Insider notes that while “one-third of countries do not charge tuition for public institutions,” and 10 countries have public tuition costs that average less than $4,000 annually, getting a diploma from a public institution in the U.S. generally runs about $8,202 a year. The closest competitor on that front is Chile, where public college costs average $7,654 annually.

Private college costs in America outpace those in other countries by a staggering rate. On average, attending a private college in the U.S. will set students—and their families—back by about $21,189. No other country even comes close in this regard, as illustrated by a comparison chart from Business Insider. 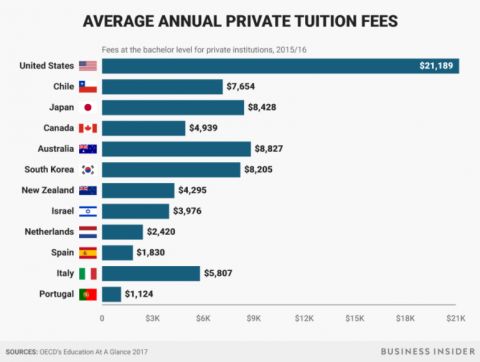 Both public and private college tuition rates in the U.S. have increased at a rate higher than inflation, making higher education prohibitively expensive for a lot of American families. A 2014 investigation by Mother Jones found the “cost of undergraduate education is 12 times higher than it was 35 years ago” and “the indexed price of college tuition and fees skyrocketed by more than 1,122 percent since 1978.” As a result, students are forced to take on debts in the form of public and private loans to the tune of roughly $100 billion a year, according to CNBC. The outlet reports that the total cost of student debt now stands at $1.2 trillion.