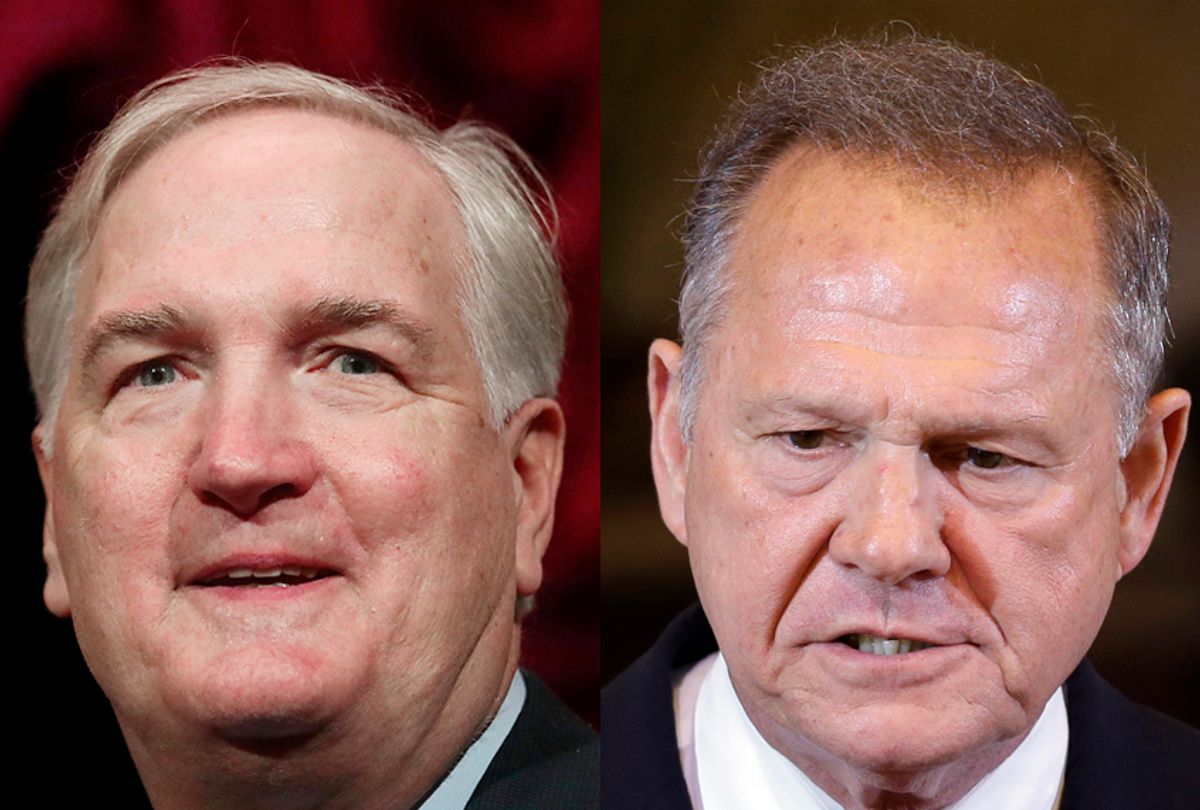 The campaign to oust white supremacists from the White House has seen some notable success -- by way of Steve Bannon’s and Sebastian Gorka’s departures. But the biggest supporters of the alt-right in the Trump administration have now turned their sights on the Republican Senate primary in Alabama, which is now a proxy war for the future of the GOP.

One unanswered question underlying the relationship between Trump and his alt-right or white nationalist allies has been how they would react to his inevitable failure to "drain the swamp." Is there bad blood between the Breitbart and Trump now that Bannon has been booted from the White House? After all, a top Breitbart editor sent an ominous one-word tweet shortly after Bannon’s departure was announced in August: "War."

As Axios recently put it, both Bannon and Gorka “are [now] preparing to go head-to-head against the president to support a candidate who is loathed by the same establishment that originally loathed Trump.” That candidate would be twice-recalled former Alabama chief justice Roy Moore, best known for his tireless efforts to promote evangelical Christianity within affairs of state. Right-wing outlets have dubbed the GOP Senate race that takes place next Tuesday “a proxy war between Trump and Bannon.”

Sen. Luther Strange, who more or less qualifies as the incumbent, was Alabama’s attorney general until he was appointed to fill the Senate seat left vacant when Jeff Sessions was tapped for attorney general in the Trump administration. Backed by Senate Majority Leader Mitch McConnell, Strange has been on a bumpy ride with Trump, finally cajoling him to visit Alabama today as Republicans in the Senate plot a last-ditch attempt to repeal Obamacare. Strange has tried mightily to pitch himself to Alabama Republicans, who overwhelmingly voted for Trump, as a rubber stamp for the president's agenda.

But Bannon encouraged a group of influential conservatives in Washington to throw their support behind Moore, who was twice chucked out of office as chief justice for abusing his position to promote his biblical fundamentalist worldview. Although he GOP has veered so far right that Republicans like Strange are dismissed by Trump’s base as the establishment, his record and platform are virtually indistinguishable from Moore’s. Still, it is Bill Armistead, Moore’s campaign chairman, who reportedly receives regular advice from Bannon. Trump’s former chief strategist has also reportedly ordered Breitbart to step up its negative coverage of the Trump-endorsed Strange. US News reported that at one point on Wednesday, Breitbart's homepage featured a dozen stories on the GOP race, all either bashing Strange or promoting Moore: 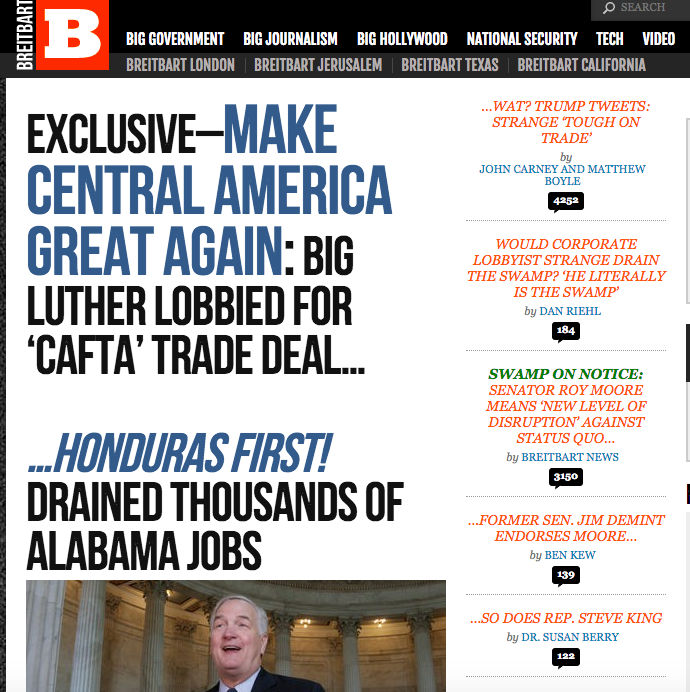 Some of Trump’s other backers in right-wing media are also publicly supporting Moore.

While Moore has refused to appear on Fox News, ceding softball interviews on the conservative cable news network to his opponent, one of the channel’s biggest stars is openly campaigning for him. Hours after Strange called out Moore for avoiding national media,  pointing to a recent local radio interview in which Moore had to ask the host to explain what "DACA" meant, Sean Hannity tweeted a Breitbart “exclusive” on Thursday that blasted the White House for supporting Strange. The website said Trump’s team had failed to comment on a story about Strange's lobbying on behalf of a trade deal Breitbart claims “drained thousands of Alabama jobs to Honduras, Mexico”:

On Wednesday evening, as more and more details about Strange’s lurid history continued dripping out to the public, Trump even called Strange “tough” on “trade,” among other issues, on Twitter.

But surely, at that time, Trump had no idea that Strange–as a lobbyist–supports shipping Alabama jobs overseas to places like Mexico, Central America, the Dominican Republic, and China. But now the White House does, and has not responded to a request for comment.

Recent polls show Moore is leading Strange, though the race has tightened.

Sebastian Gorka, the supposed national security expert who worked for Bannon at Breitbart before the two became White House advisers, traveled to Alabama to stump for Moore ahead of Trump’s and Vice President Mike Pence’s visits to the state on behalf of Strange. Now working for a far-right super PAC called the “MAGA Coalition,” Gorka was joined at a Thursday night rally in Montgomery by Sarah Palin, who was sent to the state under the banner of The Great America Alliance, a right-wing dark money group repurposed by Bannon to back Trump.

With both Bannon and Gorka unleashed from Trump’s White House, their mission to turn the GOP into the party of the alt-right may just spark a counterproductive civil war. If Republican voters stay home in the general election on Dec. 12, turned off by the bitter primary battle, Democratic nominee Doug Jones might have a puncher's chance to steal a seat in one of the reddest states in the nation. That remains unlikely, but the real lesson in the battle of Alabama may be that as we head into the 2018 midterm cycle, Trump’s struggle with his own hardcore supporters threatens to bring down both wings of the Republican Party.