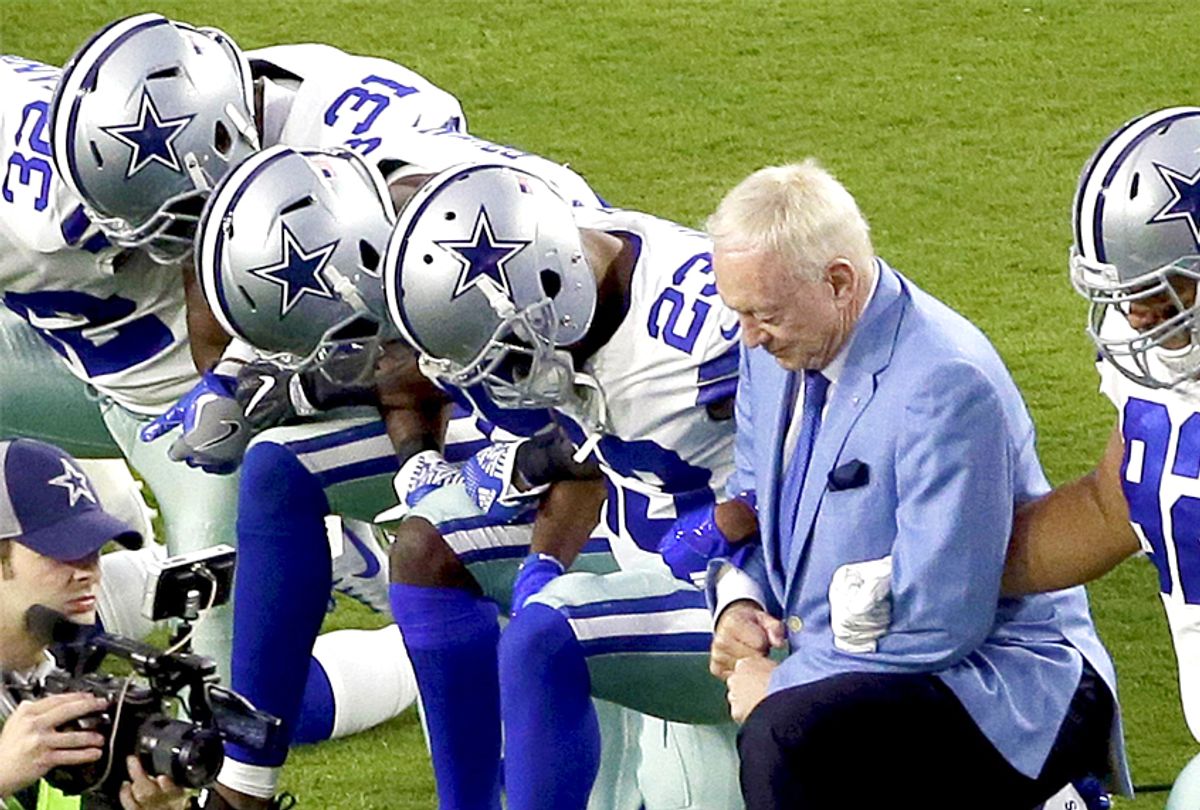 The Dallas Cowboys and owner Jerry Jones take a knee prior to the national anthem, Monday, Sept. 25, 2017 (AP/Matt York)
--

Before Monday night's football game against the Arizona Cardinals, the Dallas Cowboys — led by their owner, Jerry Jones — collectively took a knee before the national anthem was played, then linked arms while standing for the anthem.

The act was completely hollow, and it completely kneecapped the point of the kneeling protest. (Pun intended.) For proof, look how the effort was packaged and sold by the NFL itself. It wasn't a protest against racism or injustice, as was intended when since-blacklisted quarterback Colin Kaepernick started doing it last year, but was seen as a "moment of unity."

Prior to the National Anthem, the @DallasCowboys and @AZCardinals shared a moment of unity on the field. pic.twitter.com/RSWQwHTyeD

This is how history gets whitewashed. Here's what Jones had to say about protesting, from The Washington Post — and it's a great big word salad that doesn't answer what they were unified for, or even against:

"It was real easy for everybody in our organization to see that the message of unity, the message of equality was getting, if you will, pushed aside or diminished by the controversy. We even had the circumstances that it was being made into a controversy.”

What was the statement? That the Cowboys were united and didn't look at each other along racial lines? That on the line of scrimmage, there's no such thing as black or white? That the players' union is stronger than the whims of a president who wants a "kneeling son of a bitch" fired on the spot? We don't know, because it was lost in words like "unity" and "equality" and "the controversy," which sounds like how you downplay that time your underage cousin had to get an abortion. But here's the strong language Kaepernick used last year, complete with real things he's protesting against:

"I am not going to stand up to show pride in a flag for a country that oppresses black people and people of color," Kaepernick, who is currently without a team, told NFL Media last August. "To me, this is bigger than football and it would be selfish on my part to look the other way. There are bodies in the street and people getting paid leave and getting away with murder."

And here's what Kansas City Chiefs quarterback Alex Smith (who is white) had to say:

I’m talking about the comments that were made by the president, targeting the NFL, targeting the quality and character of guys in this league for that very protest. I found that very alarming.

It’s the same guy who couldn’t condemn violent neo-Nazis. And he’s condemning guys taking a knee during the anthem.

There are bigger issues out there that he probably should be worried about. But for some reason the NFL is on his mind.

There's a postscript to this story, and it's not a pleasant one. Taking a knee — even if it happened before the anthem, as not to "disrespect the flag" — was met with boos. As if the act of protest itself were proof that someone was trying to bring light to injustice; as if someone were trying to make a political statement before the salute to America's troops, no less — as if that was completely unacceptable. That was noted by Philadelphia Eagles player Torrey Smith on Twitter:

Tonight taught me that it ain't about the anthem....folks just don't want to hear about it

Wait -- maybe it's about race after all.