Trump wants a culture war on his terms. While his base is paying attention, force the conversation they've avoided 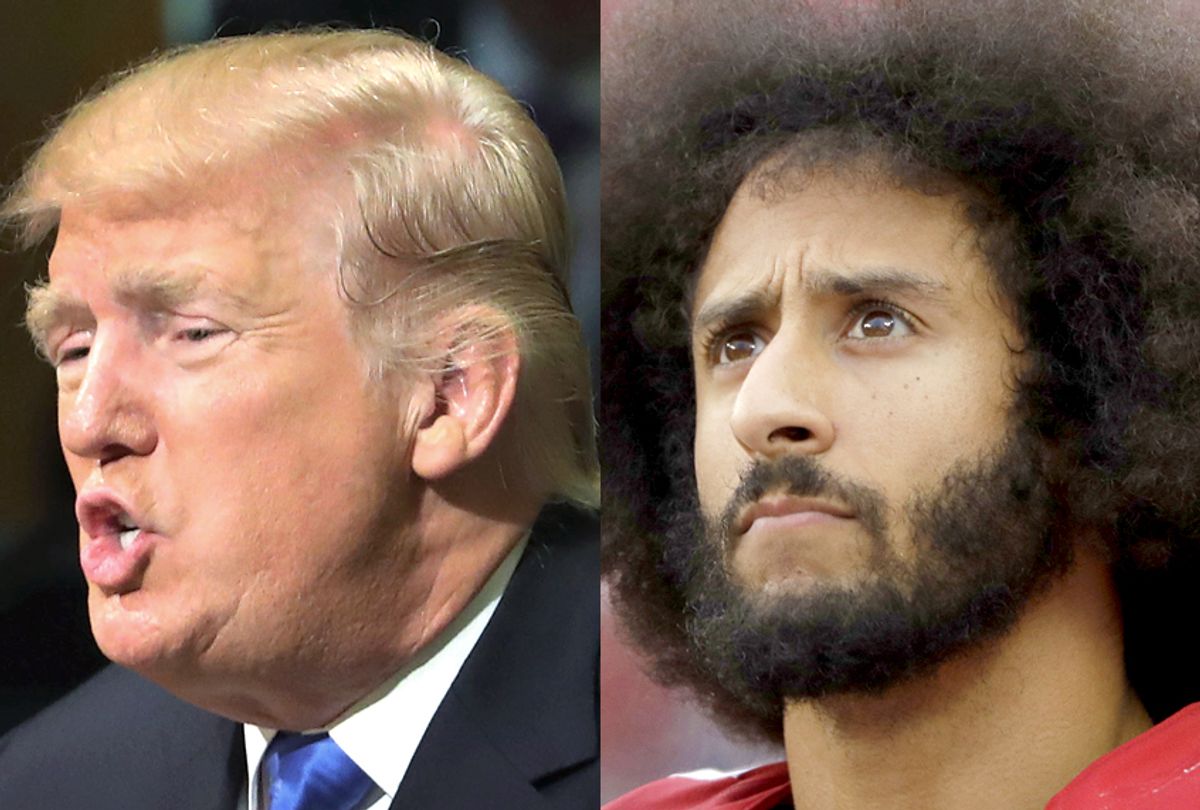 Activism is incredibly difficult to scale up. Little more than a year after Colin Kaepernick began his silent, one-man protest during the national anthem at NFL games, only nine players were kneeling, sitting or raising a fist in solidarity with the fired former quarterback. But that changed after Donald Trump traveled to the heart of Dixie to publicly command NFL owners to fire any "son of a bitch” who dares to take a knee.

As the crowd burst into cheers and chants of “USA! USA! USA!” in Alabama, I immediately knew Kaepernick’s cause would only get further distorted into a protest about flag-waving and patriotism and Trump’s attempt to push divisiveness in sports. After all, Trump also spent the weekend warring with the NBA champion Golden State Warriors, whom he disinvited from the White House in an ugly early morning tweet.

Trump, who has a disturbing history of praising brutal dictators, unleashed a torrent of rage towards NFL players all weekend that has set off the country’s second national dialogue on race in barely a month. “That’s a total disrespect of our heritage,” Trump said of players’ decision to opt-out of the compulsory display of patriotism that has preceded every NFL game since 2009. Notably, he made no similar declaration about the white supremacists in Charlottesville who used Confederate flags to stab counter-protesters last month.

Call it a diversionary tactic -- only hours before Trump made his race-baiting comments, Sen. John McCain essentially killed Republicans' latest attempt to repeal Obamacare, and it was revealed that dozens of states’ electoral systems had been hacked during the last year’s election. Or call it an ad-lib made from the comfort of the sofa. Either way, its effectiveness was immediately apparent.

In the largest single day of protest in NFL history, more than 200 players were joined by owners who left their offices to lock arms as a unified team on the field. Every single NFL team put out a statement of solidarity, even America's team, the strongly conservative-identified Dallas Cowboys. Not one of those statements, however, explicitly expressed support for Kaepernick, and only one specifically addressed racial injustice.

Kaepernick’s protest was a specific and intended action with historical context. Anyone paying attention understands his core grievances: police brutality and racism. But Trump’s base hasn’t been paying attention.

According to Facebook data analyzed by the Huffington Post, Trump’s unprovoked call for NFL owners, nearly all of whom are white, to fire disobedient black athletes led to a readership boom for right-wing media outlets that have long taken advantage of the racial resentment of their audiences:

The Daily Caller saw a 130 percent increase in weekend Facebook interactions over its August-September average. Conservative Daily, a page run by the Independent Journal Review, was up 96 percent. Fox News had an 85 percent boost. And Breitbart, which is run by former Trump adviser Steve Bannon and whose audience is often seen as representative of Trump’s base, experienced a 132 percent increase in Facebook engagement on Saturday and Sunday — and published the top post on the social network by any major American publisher. ...

Breitbart’s top-on-Facebook post was a simple graphic that scorned the protesting NFL players as “anti-American degenerates.”

Tens of millions of Americans, no matter how white and how isolated they are, have spent several days talking about the effects of police brutality, if only indirectly. Recall that just last week a white police officer in St. Louis who had been taped planting a gun on a black suspect after vowing to kill him was acquitted by a white judge. Despite days of protests and violent police pushback, the story got lost in a week when Trump threatened to “destroy” North Korea and declared Puerto Rico “obliterated.”

Trump’s supporters had long ago decided to ignore Kaepernick’s words to make his protest all about disrespecting the flag and country. As Salon’s Chauncey DeVega pointed out on Monday, Trump's voters are incredibly anxious that they are losing their "superior place" in American society to black and brown people. Let them tune out every major sports league except the PGA and NASCAR.

Kaepernick and his former league-mates who took up the cause sought to make people who were otherwise neutral care as much about a knee in Eric Garner's back as much as a knee on the ground during the national anthem. Allowing Trump to co-opt Kaepernick’s call for attention to the injustices visited upon people of color and turn it into a culture war would be missing a golden opportunity.

Trump's election has mobilized many of the white moderates Martin Luther King Jr. famously said were needed for successful social change to resist the president’s every move. While I feared that Trump’s interjection into this debate would result in the usual devolution that accompanies any collective discussion on race, this time feels different. People with a platform, like former NFL star Shannon Sharpe and former NBA coach Gregg Popovich, are pushing back on this whitewashed narrative in front of perhaps the largest audience in America’s history.

Trump was always supposed to make a presidential pivot. Instead, he’s continued his campaign straight into his first term and has revealed America’s ugly shadow. Many Americans have little interest in making this a perfect union. But the swing voters who flipped from voting for the first black president to the birther who trolled him are likely to have mixed feelings about Trump’s demand that their favorite athletes just “shut up and play ball!”

This is the perfect time to use whatever leverage Trump’s attacks have provided to push Colin Kaepernick’s movement, and this nation, further toward an actual discussion of police violence and racism. It will do no good to have that discussion on Donald Trump's terms.