Debra Messing says she regrets going on Megyn Kelly’s "Today," a bad start for the host

Over three days, Kelly has already pissed off at least two celebrities and drawn criticism from fans 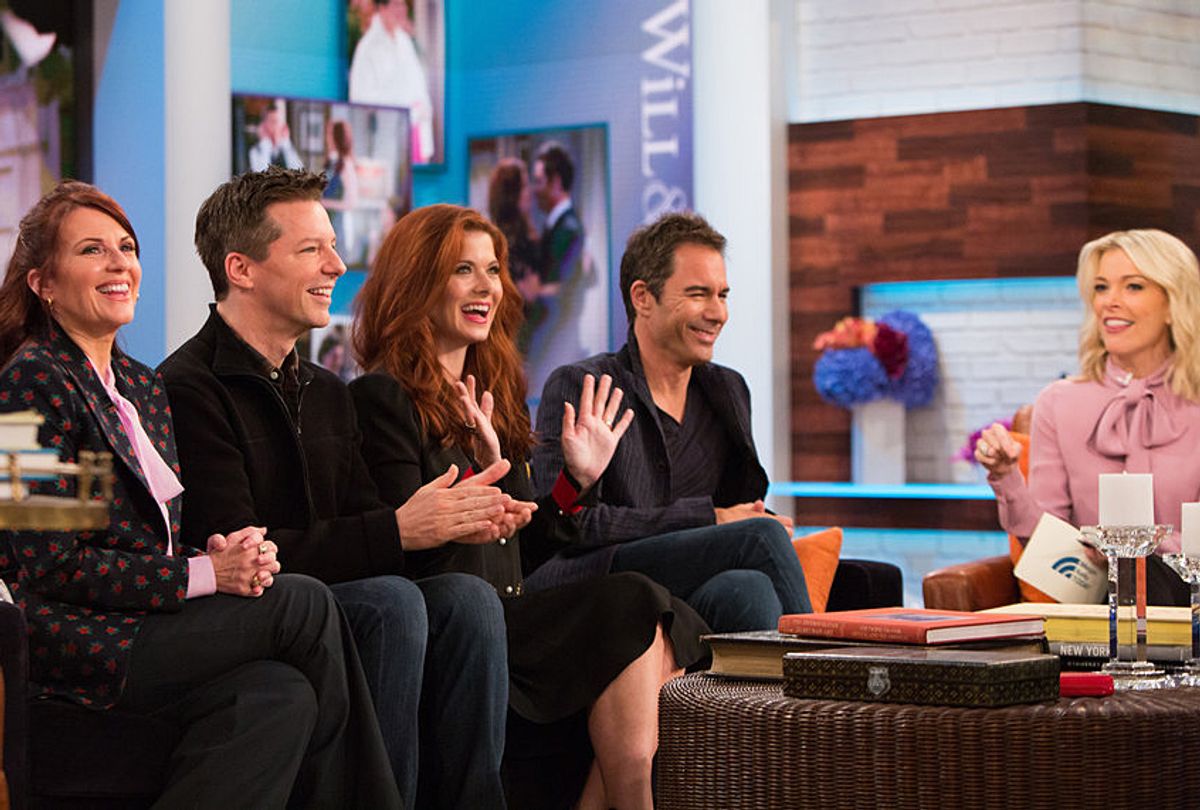 Over the course of three days, Kelly has made questionable comments, pissed off at least two celebrities and drawn criticism from fans and guests alike — leaving people wondering what the future holds.

"Megyn Kelly TODAY" kicked off with an appearance from the cast of the beloved, revived comedy, “Will & Grace,” which will be returning Thursday on NBC. After the show received backlash over Kelly’s anti-gay comments, star Debra Messing (Grace) voiced that she regretted the appearance.

Messing was on hand with co-stars Megan Mullally (Karen), Sean Hayes (Jack) and Eric McCormack, who plays Will — a gay attorney who lives in New York City. With that in mind, Kelly decided to surprise a "Will & Grace" super fan in the audience — a man named Russell Turner — who is also a gay attorney.

“Is it true you became a lawyer — and became gay — because of Will?” Kelly asked Turner.

Turner did not appear put off by the joke, and responded: “I look at Will Truman, I’m like, ‘He has it made’: lawyer, best apartment in New York City, and gay? Come on, trifecta.”

But Kelly didn’t stop there. After giving Turner tickets to a live taping of “Will & Grace,” including a behind-the-scenes tour, Kelly said: “I don’t know about the lawyer thing, but I think the ‘Will & Grace’ thing and the gay thing’s gonna work out.”

Put off by the exchange, Messing replied to an Instagram follower, who asked why she would appear on Kelly’s show. “Regret going on. Dismayed by her comments,” was part of her response.

Messing wasn’t the only celebrity Kelly would anger this week; on Wednesday’s show, she asked guest Jane Fonda about her plastic surgery, a question steeped in various kinds of misogyny that elicited a negative response. “We really wanna talk about that right now?” Fonda asked. The actor pretty much ignored the question and instead went on to talk about her new film, "Our Souls in the Night."

With politics more or less off the table for Kelly, cheery, puffball celeb interviews should be her new bread and butter (it certainly is for most morning shows).

But within the course of just a few hours of content, she's already drawn the ire of her two most famous guests (one of whom has a marquee show on the same network). It's a trend that may have already raised eyebrows among talent agents, the people who would normally entrust a morning host to treat their guesting clients with loving attention. If Kelly keeps up her streak of offending celebrities, the talk show just might struggle to find more people to talk to.

As well, Kelly's tone-deaf, regressive cheer not only reveals her to be the conservative warrior she now denies she is, but presents a problem for her producers. Viewers don't come to network morning shows for content skewed either right or left. Those who want it have cable for that.

While Kelly says she's “kinda done with politics,” it's possible she may not have that kind of openness in her. Even if she could be a smiling, shiny apolitical host, she's flailing at the duties entailed. Already, NBC's Kelly gamble is starting to look like a bad bet.