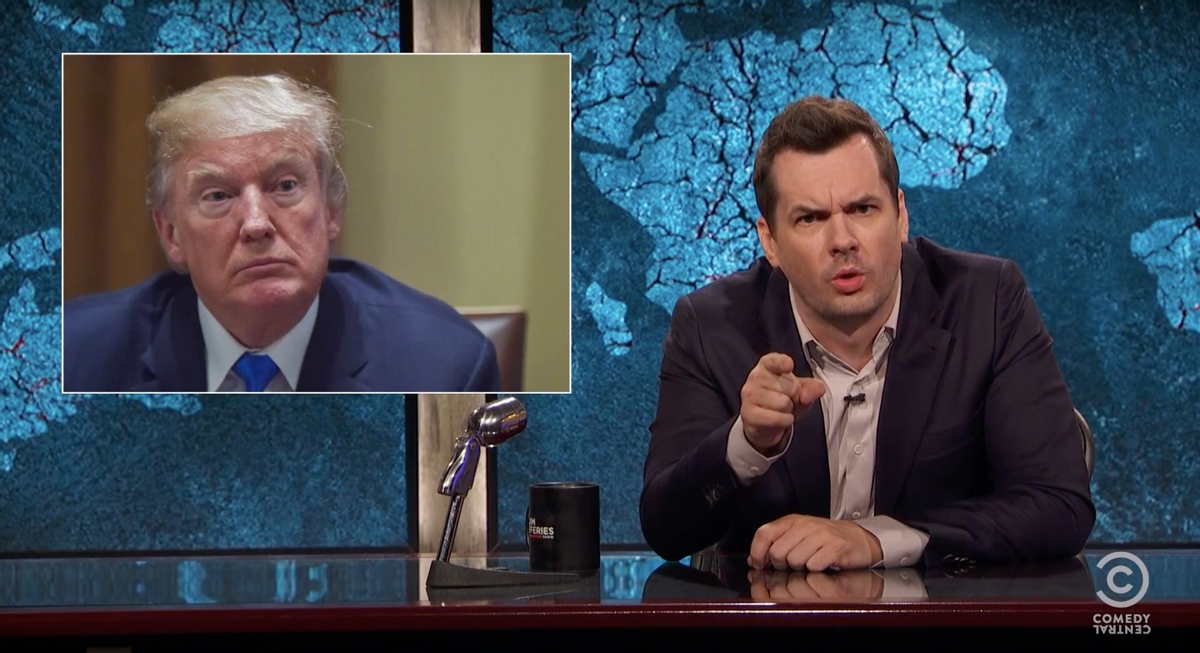 Comedian Jim Jefferies demonstrated again Tuesday the pulse he has on the culture war in America. He has already nailed what is wrong with the South's obsession to preserve Confederate monuments. And he's already mocked the use of alternative facts.

Now he has captured just how screwy white America's feud is with black athletes.

It all started, according to Jefferies, when NBA champion Stephen Curry announced that he would not be visiting the White House this year. As a result, Trump rescinded his invitation to the Golden State Warriors because Curry was "hesitating."

"He's not hesitating, Donald," Jefferies corrected Trump in his monologue Tuesday on "The Jim Jefferies Show."

"He said, 'No.' No means no. Just take Steph Curry like Melania. Not coming," he quipped.

Following his dispute with NBA players, Trump then decided to call for a boycott of the NFL.

"And that's just the latest thing that Trump supporters are boycotting," Jefferies said. "They already can't watch CNN, MSNBC; they can't subscribe to most newspapers; they can't shop at Nordstrom, T.J. Maxx and Starbucks; they can't listen to any musicians who have spoken out against Trump. Now they can't watch football. So what's left? I guess they could sit and read a book. But come on."

Jefferies said that the outrage over protests during the pregame national anthem was a little bizarre. He noted that standing for the anthem isn't a football player's job.

"It's not like Colin Kaepernick hiked the ball then pulled out a pen and wrote 'Fuck cops' on the football and then he propped it up with his dick and kicked a field goal for the other team," Jefferies said. "That, I agree, should be frowned upon. But he still did the whole quarterback thing."

"You can protest racism and still love America," he later added. "Those things aren't mutually exclusive. Just like how you can hate men who beat their wives but still tune in to the NFL every Sunday."