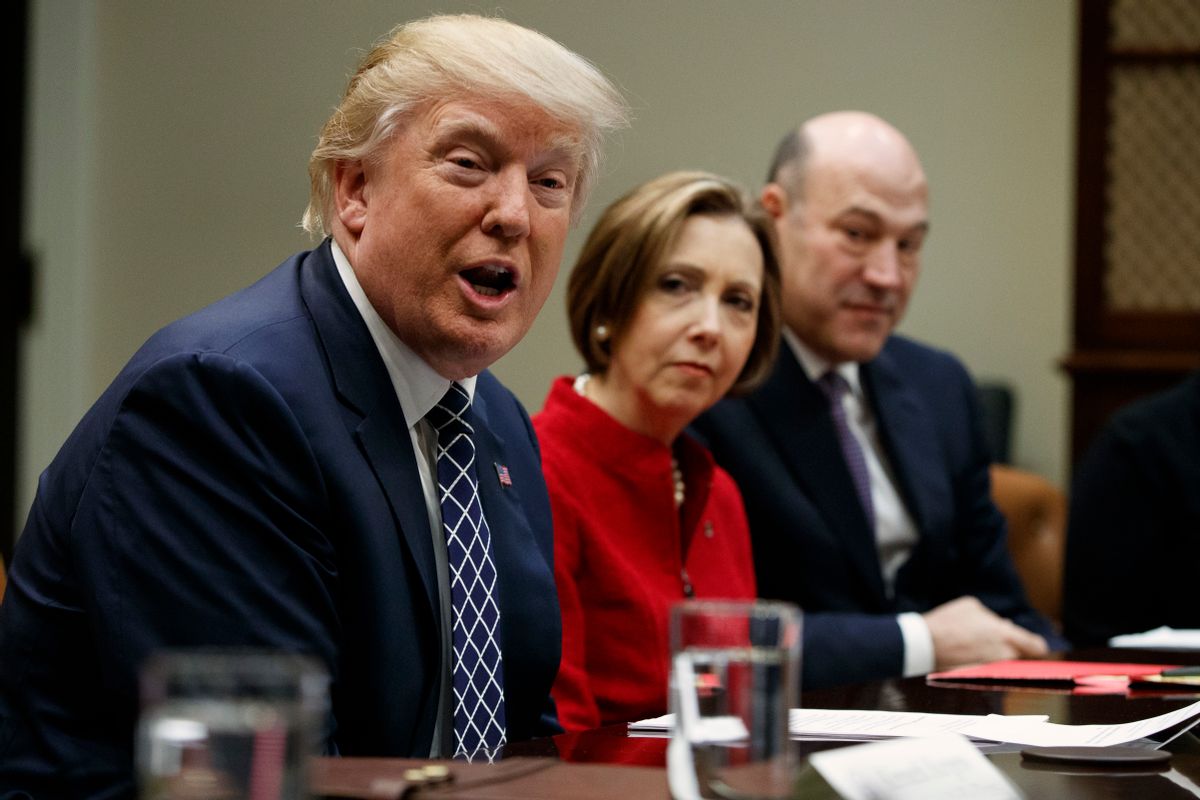 It's currently unclear how President Donald Trump's unpopular tax plan will serve the middle class, but there are two things that are known about the plan: it does nothing to help the bottom third of Americans, and it showers the nation's wealthiest — including the president — with tax cuts, a stark contrast from the administration's promises.

But that was after he told "Good Morning America" — falsely — that the wealthiest Americans wouldn't be getting a tax cut.

"When we’ve looked at the tax plan, and we’ve looked [at] what it does for Americans, we are very confident that Americans are getting a great deal here. We have also said that wealthy Americans are not getting a tax cut," he said. "We have designed a tax cut that is stimulus for the economy, where we are giving tax cuts to middle- and lower-income Americans. We want everyday, hardworking Americans to have more money in their paycheck."

A day prior, Trump said the tax plan wouldn't benefit him personally — which is also a dubious claim.

The cornerstone of Trump's presidential campaign was that he would elevate the middle-class workers of America, but there are still not enough details currently available to evaluate how his new tax plan would actually benefit them. "While some households would probably get tax cuts, others could end up paying more," The New York Times reported. The few thousand wealthiest families in America will receive a generous gift, as the estate tax and the alternative minimum tax, will be eliminated.

The Center on Budget and Policy Priorities, a think tank that analyzes federal and state budget policies, tweeted that Trump's claims are entirely without merit.

"Trump promised 'wealthy people will not be gaining at all' under the GOP tax plan... That's just not true," the think tank tweeted.

Trump promised "wealthy people will not be gaining at all" under the GOP tax plan... That's just not true: https://t.co/WeCZZgnfXK pic.twitter.com/SdGdrjQsO6

Either Trump is one of the few thousand families who can call himself among America's elite and would benefit, or he has fabricated how wealthy he is.

The exact magnitude of how Trump would benefit from his tax plan is unclear because he has refused to release his personal tax returns. But in the past, the president has personally been hindered by the alternative minimum tax, according to the Times. He was forced to pay $31 million in additional taxes in 2005 because of the law, described as "a safety net designed to prevent tax avoidance."

The plan would also do practically nothing to alleviate the economic suffering of low-income families. The Times elaborated:

The plan would not benefit lower-income households that do not pay federal income taxes. The president is not proposing measures like a reduction in payroll taxes, which are paid by a much larger share of workers, nor an increase in the earned-income tax credit, which would expand wage support for the working poor.

At a time when 78 percent of full-time workers are already living paycheck to paycheck, it's not hard to imagine what a tax plan that further enriches the nation's wealthiest and most powerful will do to the already increasing wealth gap in America.