How Trump and Democrats could cut a deal on taxes

In an even bigger shock than on immigration, a new GOP nightmare could unfold on taxes 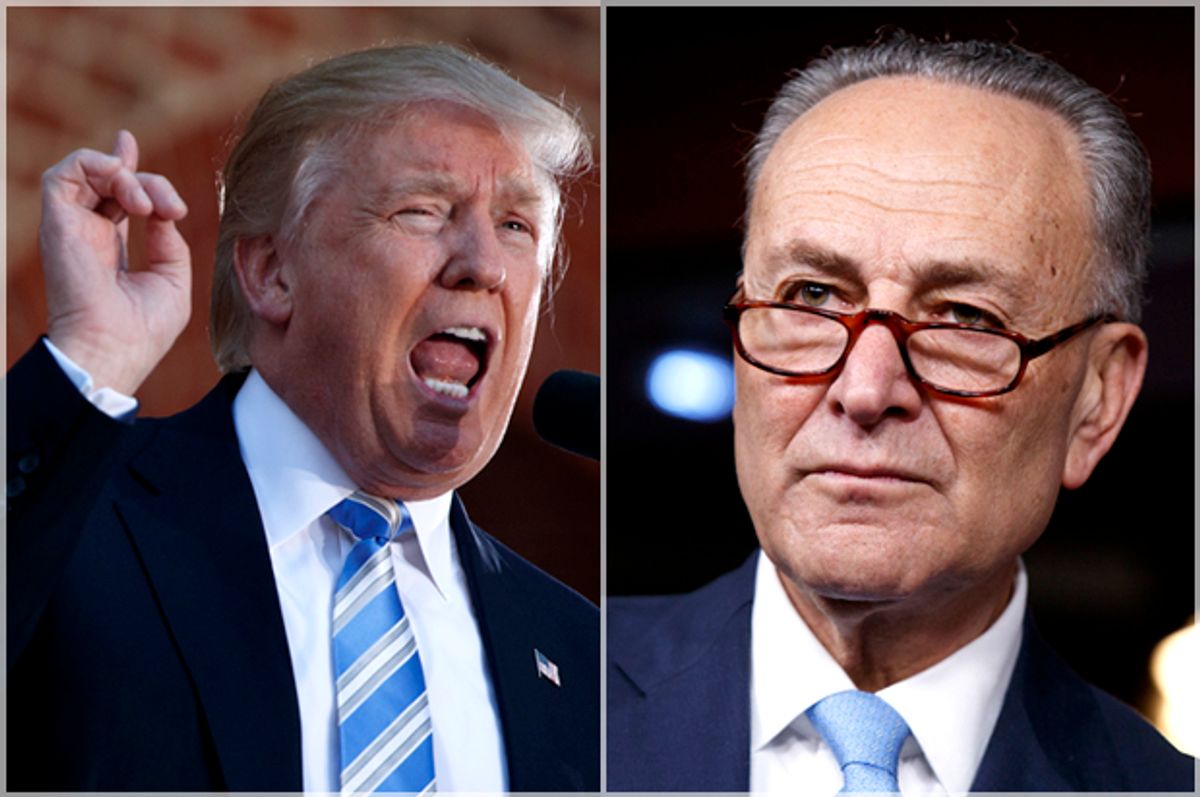 Here they go again. Despite the Republicans’ control of the presidency and both houses of Congress, their internal divisions keep on frustrating their plans to accomplish anything of consequence.

So, the most polarizing GOP president since Abraham Lincoln has come up with a startling work-around: Cut deals with the Democrats on selected major matters, including funding the government, raising the debt limit and, perhaps soon, legalizing the Dreamers.

The next big test is tax reform. If (when) Mitch McConnell and Paul Ryan can’t deliver the goods, could President Trump and the Democrats find common grounds on taxes?

We know what tax reform means to the President and congressional Republicans — much lower taxes for corporations and other businesses; lower taxes for individuals and households, especially on their investment income and an end to the pesky estate tax.

The problem for Republicans is not their relentless itch to cut taxes for businesses and wealthy people, which is a given for the GOP. The catch is that their current agenda would cost the Treasury several trillion dollars.

Their preferred ways to pay for at least a part of it, by paring corporate tax preferences and personal deductions for mortgage interest and state and local taxes, only aggravate the party’s internal divisions.

Could Trump win on taxes (hugely) by cutting another deal with Democrats? He went along with virtually everything that Nancy Pelosi and Chuck Schumer asked for to seal the previous agreements. What might the Democrats demand on taxes?

Since Democrats typically favor more federal spending, their traditional wish-list on taxes is heavy on ways to raise revenues rather than options for cutting them. That predilection could provide a basis for another agreement of convenience: Cut taxes the way that President Trump wants and pay for it the way that Democrats want.

For years, many Democrats have called for an end to “deferral,” the tax provision that lets multinational companies delay paying any U.S. tax on their foreign earnings, usually for years and sometimes in perpetuity.

It’s the opposite of the GOP’s call for a “territorial” tax system that would permanently exempt from U.S. tax any income that American businesses earn outside the United States.

Tax deferral matters most to the subset of companies that are most successful in worldwide markets — think of the internet and software giants, big pharma and brands like Coca Cola.

If both sides are prepared to cast them aside, there might be a deal that trades a lower corporate tax rate for the prompt taxation of foreign earnings.

It doesn’t make much sense economically: Since most other countries have “territorial” tax systems, deferral helps level the playing field on taxes for U.S. companies in foreign markets.

But economics doesn’t seem to matter much anymore — and consider that the White House could trumpet rolling back deferral as a powerful way to Make America Great Again by convincing companies to produce more goods and services at home and Democrats could sell it as a way to keep jobs in America.

Democrats also generally favor taxing the investment income of wealthy Americans at the same rates as the wages and salaries of everyone else. Their call for an end to lower tax rates for capital gains, interest and dividends, of course, is the opposite of the GOP’s current economic faith and tax plans.

Nevertheless, perhaps Trump and the Democrats could agree to raise the tax rate on capital income to the level of labor income in exchange for lowering the tax rates on all income.

If Reagan did it…

Wall Street Republicans would hate it, but some in the GOP might just remember that it’s precisely what Ronald Reagan did in 1986.

There is also a variation on this deal based on Democratic support for higher payroll taxes on high-income people. Schumer and Pelosi might be willing to trade lower personal tax rates, especially at the top, for subjecting capital income to the payroll tax.

This deal would also require tinkering with Social Security to ensure that payroll tax payments on capital income did not figure into the size of a taxpayer’s subsequent Social Security benefits.

But Democrats could also insist that the Treasury divide the additional revenues between the Social Security Trust Fund and the funding for lower personal tax rates.

This scenario may seem far-fetched until you consider that it would give Trump the opportunity to claim credit for lowering tax rates and saving Social Security.

In the end — and perhaps it’s a good thing — none of these scenarios is likely to happen for two reasons.

The Republicans probably will split over tax reform, but the odds they can stick together are greater on taxes than healthcare: It’s always easier to agree on how to give away money than on how to take it away.

Beyond that, agreeing on taxes would require more imagination and nerve by the White House, and probably Democratic leaders too, than either has displayed recently.

Nevertheless, the bare possibility of collaboration on taxes between President Trump and the Democrats reminds us that governing can divide a political party and being in opposition can unite it.