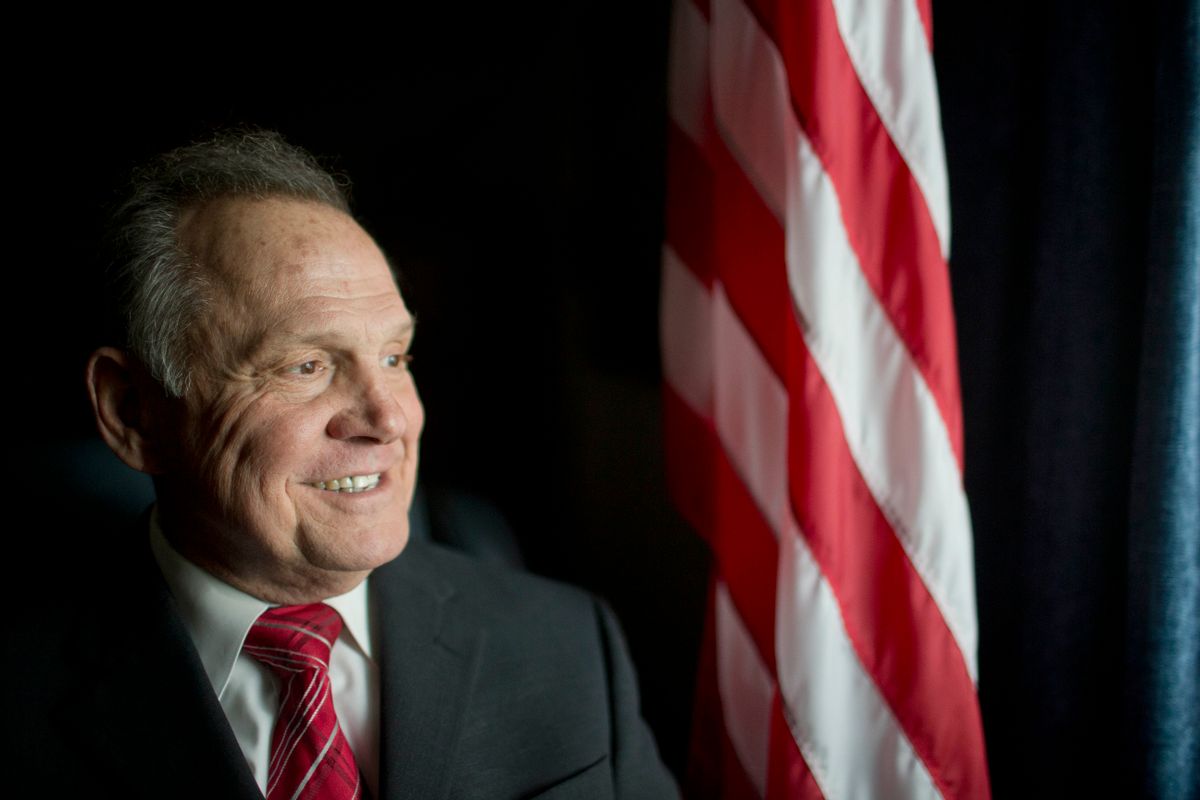 Meet Roy Moore. When he's not waving a six-shooter like Yosemite Sam, he can often be founding railing against the evils of homosexuality and the impending institution of Sharia law. After defeating Luther Strange in the Alabama Republican primary, despite the campaign efforts of President Donald Trump and Senate Majority Leader Mitch McConnell, Moore is on the verge of assuming the seat Attorney General Jeff Sessions vacated in the United States Senate, with Democratic opponent Doug Jones unlikely to receive much in the way of funding from the DNC.

Moore is a throwback to a bygone era of American lunacy, when the country rallied around George W. Bush's band of neoconservatives and the evangelical movement was perhaps the most potent force in right-wing politics. As chief justice of the Alabama Supreme Court, Moore was twice booted from office for defying federal law: first in 2003 for commissioning a monument of the Ten Commandments and refusing to remove it from the Alabama Judicial Building; and again in 2016, when he was suspended for instructing probate judges to ignore the ruling in Obergefell v. Hodges and enforce the state's ban on same-sex marriage. Moore resigned in April, after being reelected four years prior.

Since his victory Tuesday night, he has secured enthusiastic endorsements from both Vice President Mike Pence and Trump himself, who surreptitiously deleted his tweets endorsing Strange. "Spoke to Roy Moore of Alabama last night for the first time," the president tweeted Wednesday morning. "Sounds like a really great guy who ran a fantastic race. He will help to #MAGA!"

Here are just a handful of the more clueless and deranged things this great guy has said over the past decade or so.

“Homosexual conduct should be illegal," Moore told C-SPAN in 2005. “It is immoral. It is defined by the law as detestable.”

“Our foundation has been shaken," he told Alabama voters. "When we become one nation under god again, when liberty and justice for all reigns across our land, we will be truly good again."

During a speech in February at the Open Door Baptist Church, Moore argued that the 9/11 terrorist attack was an act of divine retribution.

“Because you have despised His word and trust in perverseness and oppression, and say thereon . . . therefore this iniquity will be to you as a breach ready to fall, swell out in a high wall, whose breaking cometh suddenly at an instance," he thundered, quoting from the Book of Isaiah. “Sounds a little bit like the Pentagon, whose breaking came suddenly at an instance, doesn’t it? If you think that’s coincidence, if you go to verse 25: ‘There should be up on every high mountain and upon every hill, rivers and streams of water in the day of the great slaughter when the towers will fall.'"

3. On people of color

“Now we have blacks and whites fighting, reds and yellows fighting, Democrats and Republicans fighting, men and women fighting,” he told rallygoers at an ostensible call for unity in Florence, Alabama last week. “What’s going to unite us? What’s going to bring us back together? A president? A Congress? No. It’s going to be god.”

The Moore campaign defended his slurring of Native and Asian American communities by citing (what else) a song called "Jesus Loves the Little Children," whose lyrics include "all the children of the world — red, brown, yellow, black and white."

Back in August, the Alabama judge told the Guardian that "maybe Putin is right" about homosexuality. The Russian head of state has said it's his "duty" to stop same-sex marriage and "uphold traditional values," amid reports that members of the country's LGBT community have been rounded up and tortured, possibly under the president's orders.

Moore went on to suggest that the United States has become a "focus of evil in the modern world," while praising Russia for “protecting Russian young people against homosexual propaganda.”

Shortly after the Supreme Court's ruling in Obergefell, Moore pronounced it "even worse" than 1896's Plessy v. Ferguson, which established racial segregation as the law of the land.

"I believe it's worse because it affects our entire system of morality and family values," he told CNN. "There is no such thing as same-sex marriage in the constitution. The words are not there, we've never had it in our history."

According to Moore, Sharia law has come to the United States, specifically to the cities and townships of Illinois and Indiana. At least that's what he's heard. He can't really be sure.

“I was informed that there were. But if they’re not, it doesn’t matter,” he told Vox's Jeff Stein. “Sharia law incorporates Muslim law into the law. That’s not what we do. We do not punish people according to the Christian precepts of our faith — so there’s a difference. I’ll just say this: I don’t know if there are. I understand that there are some.”

In December 2006, on the day Keith Ellison was to be sworn in as the first Muslim member of Congress, Moore penned an op-ed in WorldNetDaily arguing that Ellison's faith should preclude him from holding office.

"Enough evidence exists for Congress to question Ellison’s qualifications to be a member of Congress as well as his commitment to the Constitution in view of his apparent determination to embrace the Quran and an Islamic philosophy directly contrary to the principles of the Constitution," he wrote. "In 1943, we would never have allowed a member of Congress to take their oath on 'Mein Kampf,' or someone in the 1950s to swear allegiance to the 'Communist Manifesto.'"

8. On right to work and DACA

Corporate-friendly "right-to-work" legislation, which Republicans have been baying for since Trump captured the White House, would allow workers to opt out of payments to unions that have previously been compulsory. If a bill were to be signed into federal law, it could prove a devastating blow to an embattled labor movement. Moore appears to have no idea what "right to work" even means.

"Right to work?" he asked one of his questioners at an American Principles Project in April. "Explain . . . a little bit."

Moore seems no less bewildered by the subject of DACA (Deferred Action for Childhood Arrivals). Here's what he had to say about Dreamers during a radio interview in July:

“Pardon? The Dreamers program? Why don’t you . . . quit beating around and tell me what it is."

Trump may not have endorsed Moore in the Republican primary, but the president shares one of Moore's favorite racist pastimes: birtherism. The Alabama Republican first cast doubt on Barack Obama's citizenship in 2008, and as recently as 2016.

"My opinion is that there is a big question about that," Moore told a meeting of the Constitution Party in December. "My personal belief is that he isn't [a U.S. citizen], but that's probably over and done in a few days, unless we get something else to come along,"