Another one bites the dust: Tom Price booted as HHS secretary 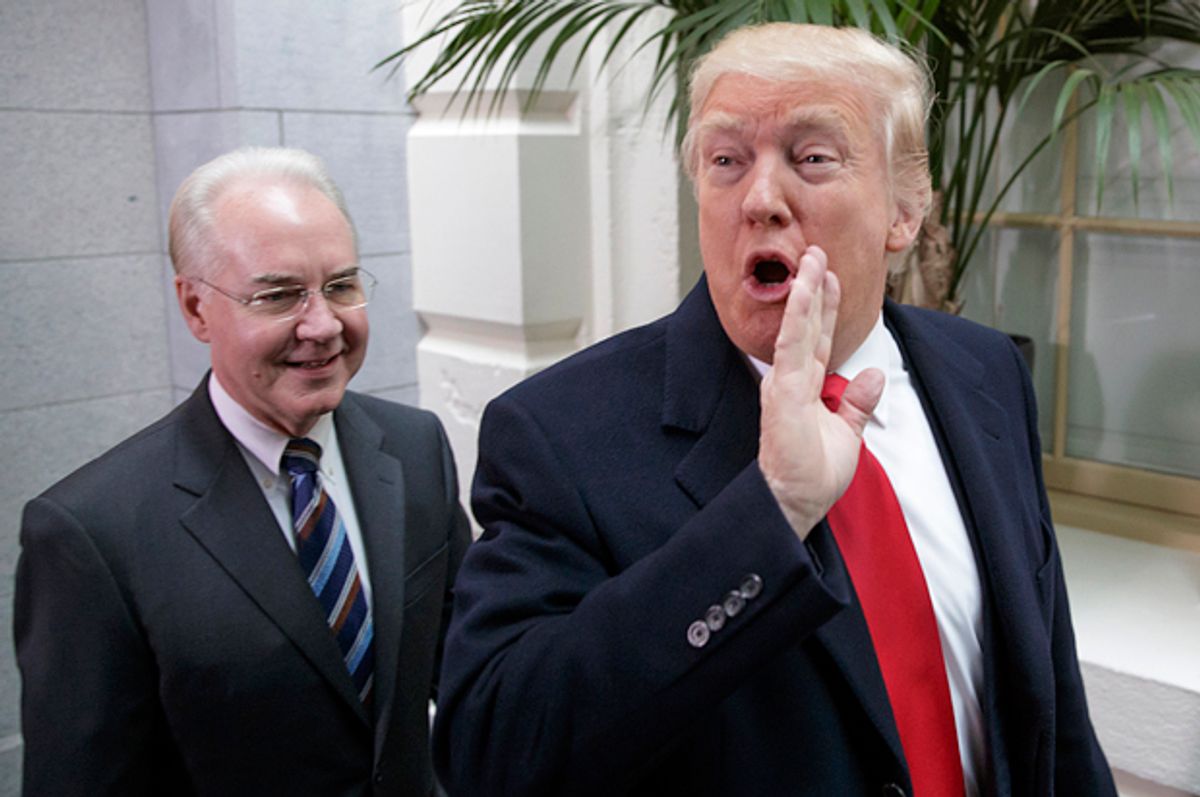 Just before 5 pm on the East Coast, The White House got ahead of Donald Trump's weekend tweets to announce that Health and Human Services Secretary Tom Price resigned his Cabinet post.

Price, a former conservative congressman from Georgia, not only failed to shepherd Republicans third attempt to repeal Obamacare through Congress this week, it was revealed that his travel practices cost taxpayers a reported $1 million since May.

“He’s a very fine man, but we’re going to make a decision sometime tonight,” the president told reporters before boarding Marine One at the White House on Friday afternoon. Price was booted less than one hour later.

Republicans spent millions to hold Price's congressional seat against an upstart Democratic challenger, only to see the fiscal conservative fail at his one job and then resign in scandal.

Price — a longtime critic of wasteful federal spending — was caught using private jets to attend business meetings while making more extravagant endeavors, including a trip to a property he owns on an island to eat lunch with his son and wife. Politico also reported this week that he took military aircraft for official trips to Africa, Europe and Asia, costing taxpayers more than $500,000.

Price is hardly the only member of Trump's Cabinet to come under scrutiny for their travel habits:

The Washington Post on Friday reported that Veterans Affairs Secretary David Shulkin attended a Wimbledon tennis match, toured Westminster Abbey and took a cruise on the Thames this summer during a 10-day trip to discuss veterans’ health issues in Britain and Denmark.

Shulkin, who traveled on a commercial airline, was accompanied on the trip by his wife, whose airfare was paid for by the government and who received a per diem for meals, the Post said, noting that the Department of Veterans Affairs said she was traveling on “approved invitational orders.”

His six-person traveling party included an acting undersecretary of health and her husband as well as two aides. They were accompanied by a security detail of as many as six people, the Post said.

The trip came less than two weeks after Shulkin signed a memo instructing top VA staff to determine whether employee travel in their organization was essential, the Post said. His predecessor took no foreign work trips, the newspaper said, citing an anonymous former VA official.

After coming under bipartisan criticism, Price initially agreed to repay only for the cost of his own seat, only about $51,887.31.

"The taxpayers won’t pay a dime for my seat on those planes,” Price pledged before he was fired on Friday.

The White House said in a statement that President Trump intends to tap Don Wright to serve as acting secretary. Wright currently serves as deputy assistant secretary for Health and director of the Office of Disease Prevention and Health Promotion.

Since the president took office in January, he has seen the departure of his FBI director, White House chief of staff, press secretary, communications director (x2), national security adviser and chief strategist.