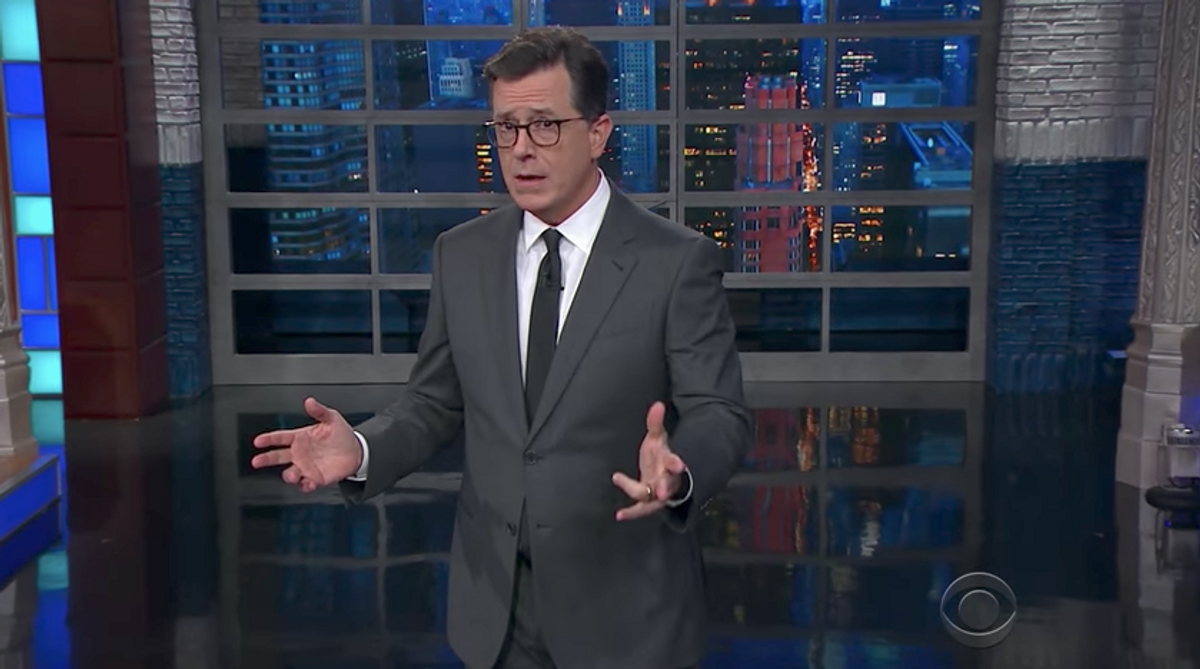 "Late Show" host Stephen Colbert asked the audience if they had ever wondered, "What can I do, even in my own small way, to make rich people richer?"

He added that if the answer is no, "then you did not write [President] Donald Trump's tax plan."

In his new tax plan, Trump eliminated the alternative minimum tax and was forced to fork over $31 million in additional taxes in 2005. "Those are lotto numbers," Colbert said.

"I mean, that's not just Powerball, that's, I'm in Powerball."

"Even though the GOP's tax plan is only going to benefit the wealthy few, they're pitching it to the everybody else," Colbert said. He criticized the GOP for strutting out Sen. Tim Scott, R-S.C., who is black, to promote their tax cuts.

"See if you can guess what group Senate Republicans are trying to court with this message," the late-night comedian said.

In his message Scott said that "we want to help you, #KeepYoMoney."

"It's not like Sen. Scott is the only Republican who could have delivered that message," Colbert said. "They could have gone with the GOP's second-most-diverse senator, Caucasian Q. Whitington III, but they already have him promoting the bill's original hashtag, #RetainThyEstate."

But Colbert wasn't the only late-night host who took shots at Trump's tax plan. "Daily Show" host Trevor Noah pointed out that taxes are "a much better subject for Republicans than health care."

The Daily Show with Trevor Noah

"Republicans are like that jock at school who's bad at every subject but kills it at P.E.," Noah joked.

Seth Meyers also pointed out that Trump was "so desperate for any positive achievement that he's now outright lying about the fate of his health care bill and his new tax plan" not benefitting the rich, or himself.

"He has no idea what he's talking about," the late-night comedian said. "When it comes to taxes Trump is either clueless, or lying, or both.

"The only way he was raising taxes on the rich was if he could pick which rich people. 'Rosie, she's going to get her taxes raised; Meryl Streep's gotta start paying her fair share, everyone in the NBA except for the tall white guy,'" Meyers joked.