Neil Gorsuch is preparing to deal a deathblow to public unions

On same day SCOTUS announced it will hear case on unions, Gorsuch attended event hosted by group funding the case 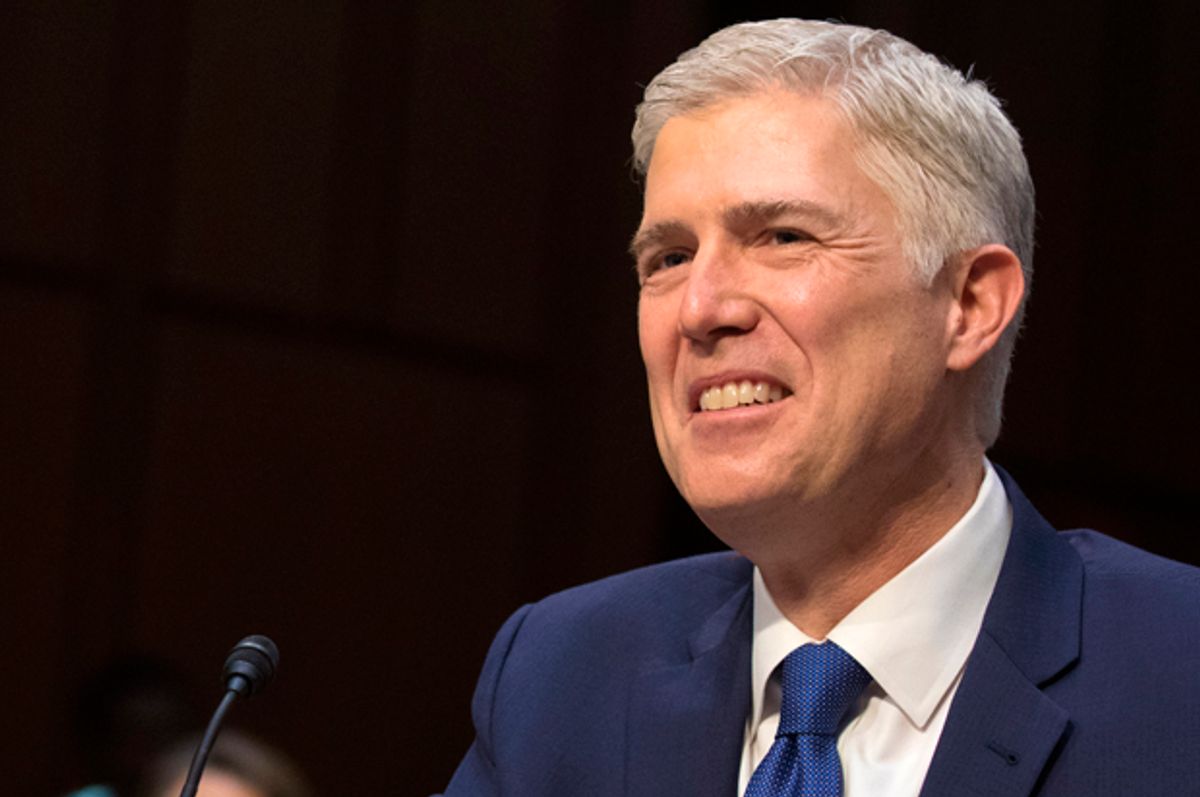 Hours after the Supreme Court announced it would again hear a challenge to mandatory union fees for public sector workers -- a case that could ultimately decimate organized labor -- Justice Neil Gorsuch traveled to Trump Hotel to speak to a conservative group funded by the same big money donors looking to diminish unions.

Gorsuch’s Thursday stop was part of what looks to be a thank you tour of various conservative groups who helped hold up President Barack Obama’s high court nominee, Merrick Garland, to make way for Gorsuch’s controversial nomination. He was introduced at the Trump Hotel event by a member of Trump’s administration, Bureau of Legislative Affairs staffer Mary Elizabeth Taylor. Politico described Taylor as “a so-called sherpa for Gorsuch on Capitol Hill during the confirmation process,” noting that “Gorsuch warmly embraced her as he took the stage.”

Setting aside the glaring conflict of interest in Gorsuch helping to enrich a Trump property just as several cases charging that the president is violating the Emoluments Clause of the Constitution are making their way through the judicial system, the group he addressed is funded by the same people funding the effort to dismantle unions that Gorsuch and his fellow justices agreed to take up.

As  New York Times labor reporter Noam Scheiber noted, the Fund For American Studies’ is partially supported by the Lynde and Harry Bradley Foundation, a tax-exempt, non-profit foundation that is pouring money into the national anti-union movement.

The longtime bane of organized labor, 28 states now have “right to work” laws that forbid requiring workers to join or support a union as a condition of employment. By law, however, unions are required to represent all employees. The Supreme Court has said that such laws are constitutional. The Court has also ruled that unions can require nonmembers to help pay for the union’s collective bargaining efforts to prevent freeloading.

But in the latest in a series of efforts by conservative anti-union groups to overturn a 1977 Supreme Court decision extending the right to collect “fair share” fees to nonmember employees of state and local government unions, Janus v. American Federation allows the newly minted conservative majority to finally strike what could be a deathblow to public sector unions.

A little over a month after the death of Justice Antonin Scalia, the Supreme Court justices deadlocked 4-4 in a similar case. A 2014 5-4 ruling with Scalia in the majority restricted these fair share obligations to full-time government employees. Now with Gorsuch installed in Scalia’s seat, the Supreme Court appears poised to turn every state into a partial “right-to-work” state with one decision.

Unions would lose a substantial source of revenue if the Court overturns its 1977 decision. Union membership in the U.S. declined to just 10.7 percent of the workforce last year, as private-sector unions continued their drastic decline since 2007’s recession.

Since Republicans swept statehouses across the country during the 2010 midterm elections, conservatives have banned the collection of agency fees in manufacturing states like Michigan, Ohio and Indiana. After Michigan’s Republican governor signed such a law in 2012, union membership in the state dropped seven percent, according to the Economic Policy Institute. Union membership in Wisconsin has dropped nearly 40 percent in the five years since Gov. Scott Walker became a right-wing darling by going to war with public-sector unions.

This conservative push hasn’t just been in accordance with economic orthodoxy, it’s a political power move. As Newt Gingrich once put it, if you dismantle unions, you destroy the Democratic Party’s "army on the ground."

The Democratic party’s infrastructure has relied heavily on public union support for decades. About half of all union members now work for federal, state and local governments. Scalia’s death last year gave public-sector labor unions a big break. Gorsuch now appears to be itching to deliver the deathblow.