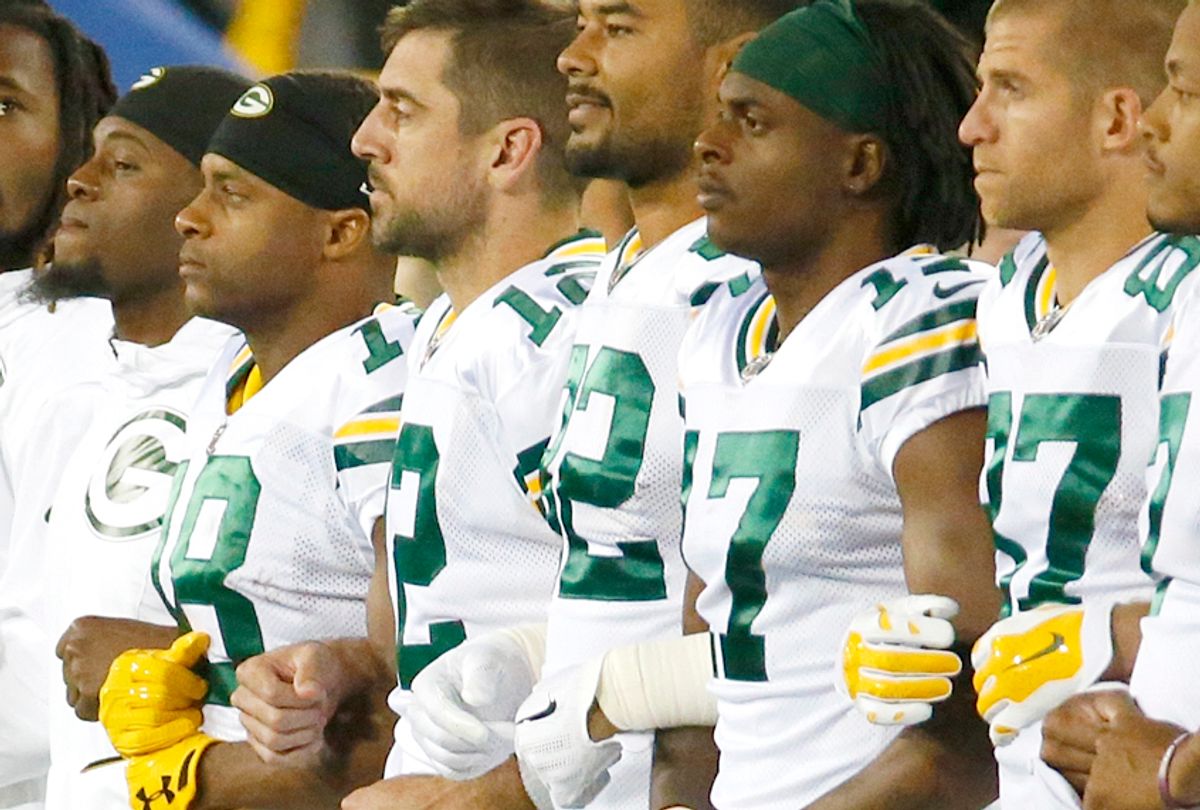 The move was orchestrated by the Packers, Thursday’s home team. On Tuesday night, the Packers issued a statement inviting fans to join the two teams in locking arms as a symbol of unity.

"Those of us joining arms on Thursday will be different in so many ways, but one thing that binds us together is that we are all individuals who want to help make our society, our country and our world a better place," the statement read. "We believe that in diversity there can be UNI-versity. Intertwined, we represent the many people who helped build this country, and we are joining together to show that we are ready to continue to build. . . . Let's work together to build a society that is more fair and just."

Some fans followed the Packers’ lead, many others did not. There were chants of “USA! USA!” and some fans yelled at the players during the anthem, urging them to put their hands over their hearts.

"We could hear some 'USA' chants as it started, which is fantastic. Could also hear some negativity being yelled during the anthem," Packers quarterback Aaron Rodgers said after the game. "Semantics there, right? What's disrespectful to the anthem? Yelling things during it, or standing at attention with arms locked, facing the flag? That's for you to decide."

The point Rodgers made is indicative of the way the protests and the reactions to the protests have become about more than the anthem and patriotism. When President Trump commented on the protests during a rally last weekend, he amplified the debate and infused it with divisive politics.

It has become hard to decipher what different gestures mean and what the debate is about. If a player locks arms with his teammates is he protesting oppression of black people, or is he protesting the president’s comments, or is he merely expressing some nebulous form of solidarity? President Trump tweeted on Sunday that he condones standing with locked arms but not kneeling. But what’s the difference? There is no guidebook to American patriotism. The act of standing with hand over heart during the national anthem is a constructed act of symbolism and the meaning of other acts, like kneeling or linking arms, is currently being constructed by players and reconstructed by Trump.

And more importantly, what are the goals?

The protests started last season with San Francisco 49ers quarterback Colin Kaepernick, who said "I am not going to stand up to show pride in a flag for a country that oppresses Black people and people of color. . . . To me, this is bigger than football and it would be selfish on my part to look the other way. There are bodies in the street and people getting paid leave and getting away with murder."

Kaepernick’s protest has succeeded at starting a national dialogue. But the conversation has mutated into one about more than just oppression. Trump has tried to make it about patriotism and in so doing has made it about freedom of expression and, well, Trump.

Conversations are happening — on social media, in the press and in communities. Athletes and pundits were quick to rebuke Trump last weekend. But at some point, the conversations need to evolve beyond whether athletes should be protesting and become about what’s next. These protests can be a vehicle for change, but if that is to happen protesting players need to stipulate concrete demands: We will stop protesting if . . .

But that requires organization and leadership. Colin Kaepernick has heretofore been the figurehead of this protest but it’s hard to lead a movement from the stands. A leader who is a better player and bigger star than Kaepernick needs to step forth — someone who is indispensable and unimpeachable.

Impassioned outbursts from Trump about symbolic acts like kneeling during the anthem work to players’ and progressives’ advantage. Trump is ceding leverage. But resistance, both in terms of the NFL protests and politics generally, doesn’t have to be reactive. Forgive me for mixing sports metaphors, but players score by putting the ball back in Trump’s court.