Pixies' "Doolittle" and the long shadow of the White Album

The fragmented, jarring heir to "Helter Skelter" and "Savoy Truffle" 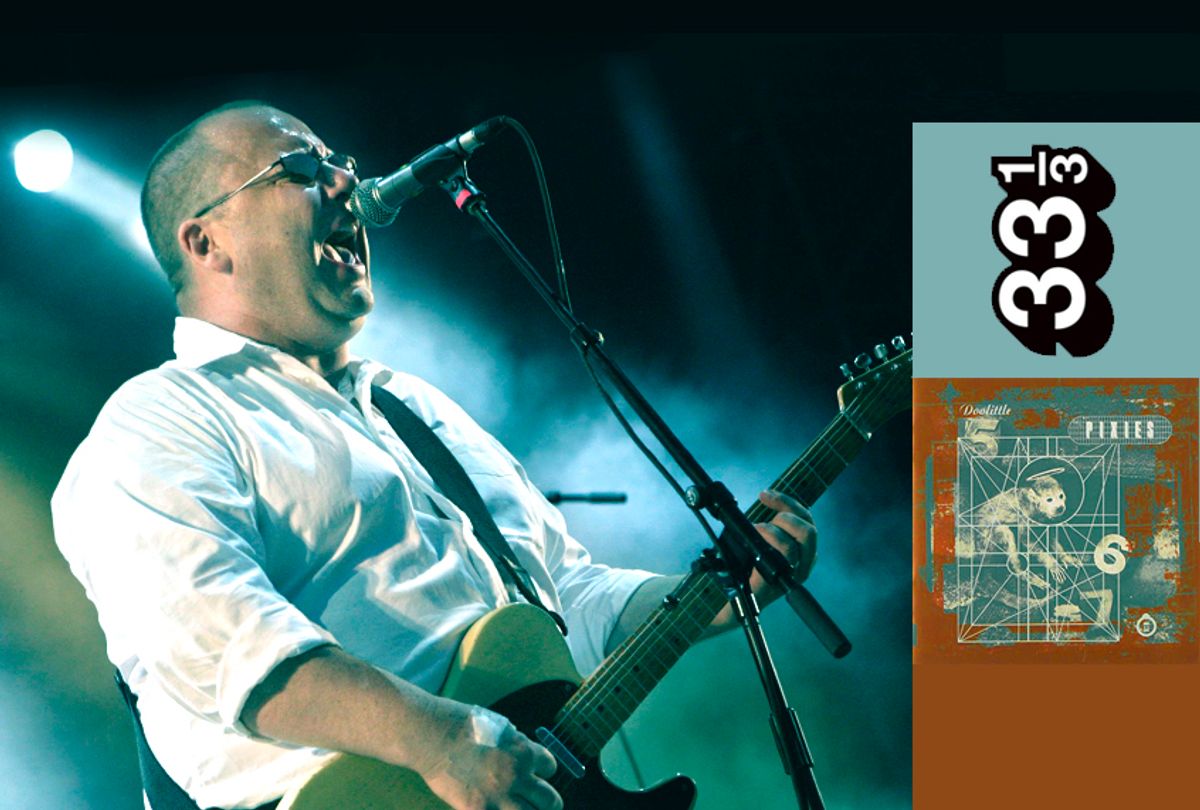 Excerpted from "The Pixies' Doolittle" by Ben Sisario (Bloomsbury, 2006). Reprinted with permission from Bloomsbury Publishing.

As the [Doolittle] sessions began, Charles Thompson got into the role of Black Francis the face-squinching squealer. “I do sing a little bit differently when I’m singing with the Pixies,” he says now. “Some other little character or something enters in. It’s more nasally, more spazzy or something.”

Jonathan Claude Fixler saw the transformation while recording the "Whore" demos. “I noticed that these songs had character voices,” he says, “the voice singing ‘Dead’ and ‘Tame’ was not really him. It was funny.” He made a remark to Thompson about the personae. “It was a bit like the Beatles’ White Album, with the character voices in ‘Rocky Raccoon,’ ‘Sexy Sadie,’ ‘Helter Skelter.’” Thompson looked up and told Fixler, dude!, he had been listening to the White Album obsessively for like the last two weeks! But it had likely been far longer—the Pixies had recorded a shrill version of “Wild Honey Pie” at their first BBC session, on May 3, 1988, and the song had been a staple of their live set that year.

As a work of fragmented, jarring pop, the White Album is an aesthetic precursor to "Doolittle." It relies on stark minimalism (“Why Don’t We Do It in the Road?,” “Julia”), sudden violence (“Helter Skelter,” “Happiness Is a Warm Gun”), and goofy irony (“Rocky Raccoon,” “Everybody’s Got Something to Hide Except Me and My Monkey”), and throughout remains emotionally remote. Sung by a cast of mostly two-dimensional figures, it is a riddle that teases the listener yet evades easy interpretation, and it launched a tradition of rock built on eclecticism and obscurity. No wonder Thompson was gaga over it.

The White Album was important to Joey Santiago as well. He may have cribbed from Hendrix and Wes Montgomery, but the most recognizable Santiagoism, the bent note that whines into dissonance, came from George Harrison. “‘Savoy Truffle,’” Santiago nods. “When you hear that song, you go, ‘Ah, there it is!’ Every time that part came on, it’s like, ‘Hey!’” (Remember, man of few words.) That magical part is a bluesy E that veers upward nearly half a step in a quick, mousy squeak. The technique turns up, beautifully twisted, all over the Pixies oeuvre, from “Vamos” to “Broken Face,” “Where Is My Mind?” to “I Bleed,” “Number 13 Baby” to “Planet of Sound.” In the Santiago school of notebending, two strings are preferred, one bent and one not, or both slightly off, creating a beat frequency through the interference of two close but clashing sound waves. “You can hear it shaking when it’s off,” Santiago says now. “And I loved it, you know. I think in high school I even showed a friend of mine, ‘Listen to this.’ And I wasn’t bending it—it was making those shaky notes. ‘Oh, that’s because it’s out of tune!’ I like it!”

Throughout "Doolittle," Santiago’s crying bent notes are a melodic motif, from the double-tracked solo in “Monkey Gone to Heaven” to the five-second taste of brine at the beginning of “There Goes My Gun” to the siren call in “Gouge Away.” The opening to “There Goes My Gun” was one of Norton’s few indulgences in the sound of pure guitar—in the song’s original demo, and on a Peel Session version recorded just weeks before "Doolittle," Santiago’s squall was buried within a drum intro, but on the album Santiago has a wide field all to himself. “He can play one note,” Norton says, “and make it sing, make that note do things that no one else has ever done with it.”

Thompson had long toyed with the classic power-pop trope of playing the verses tense and restrained and then letting the noise and emotion burst forth on the big kick-ass chorus, the New Wave apotheosis of which is the Cars’ “Just What I Needed.” It was not the only songwriting trick in Thompson’s book, though he happened to have used it in his two best songs to date, “Gigantic” and “Where Is My Mind?” But it was now very much on his mind. "Doolittle" is where Thompson—with the help of Norton’s crisp production—perfected the quiet-loud-quiet-loud dynamic, and the album remains the blueprint of the style. “Tame” is its Platonic ideal, with just three chords and three sing-songy bass notes that could have been in a Ronettes song. On the chorus the same three notes persist, this time twice as loud, with an ugly monochord by Joey Santiago blaring and Black Francis’s big head making the most raucous sound of all. The valve turns off, then on again, then off—a simple binary function. It’s a jerky technique, and it can be terrifying, but it’s jokey, too. “It’s a little bit tongue-in-cheek,” Thompson says. “It’s a little bit, well, not self-mocking, but it’s got a little bit of a grin on it, you know what I mean? It’s just sort of like, ‘I’ll be quiet, I’ll be loud, I’ll be quiet.’ It’s kind of playful or childish. It’s simple.”

Musical opposition was spread over the entire album. “Debaser” opens it with an orgy of guitars slashing in every direction, while in the middle of it all Black Francis writhes in degenerate ecstasy like Z-Man from "Beyond the Valley of the
Dolls." (Or at least like Nick Cave howling, “Release the bats! Release the bats!”) Next is “Tame,” the demonstration of the dynamic dyad. From there Thompson spaces things out, and patterns emerge: slowish dirges driven by Deal’s bass and Santiago’s acrid guitar (“I Bleed,” “There Goes My Gun,” “Dead”), sunny pop strummers led by Thompson’s rhythm guitar (“Wave of Mutilation,” “Here Comes Your Man”). Ugliness and prettiness are constantly in conflict—Thompson’s comforting acoustic guitar against Santiago’s caustic electric, the angelic feminine of Deal’s voice versus the demonic masculine of Thompson’s.

The artful play of opposites is part of the band’s basic musical DNA. Take away Santiago’s lead guitar and Thompson’s vocals and you are left with a steady, bouncy rhythm section and peaceable acoustic chords that wouldn’t be out of place in an R.E.M. song. Against this, the screams and lead guitar are a monstrous mutation, something that has gone fascinatingly wrong. Thompson kept the songs in a further unstable state by doctoring their time signatures, adding and deleting beats here and there to form irregular shapes in repetition. The instrumental break in “Number 13 Baby” is an example of this. After three bars of 4/4 time, it drops two beats and then goes back: 1-2-3-4, 1-2-3-4, 1-2-3-4, 1-2.

But for all its truculence, its spacewarp dynamic switches and wobbly time signatures, "Doolittle" remains tightly wound, irresistible pop. “Wave of Mutilation,” “Monkey Gone to Heaven,” “Here Comes Your Man,” and “Gouge Away” are sleek, tuneful ditties without a pinch of fat. Like a Buddy Holly song—or a Ramones song, or a Beach Boys song— they catch your ear just long enough for you to fall in love, and then they’re over.