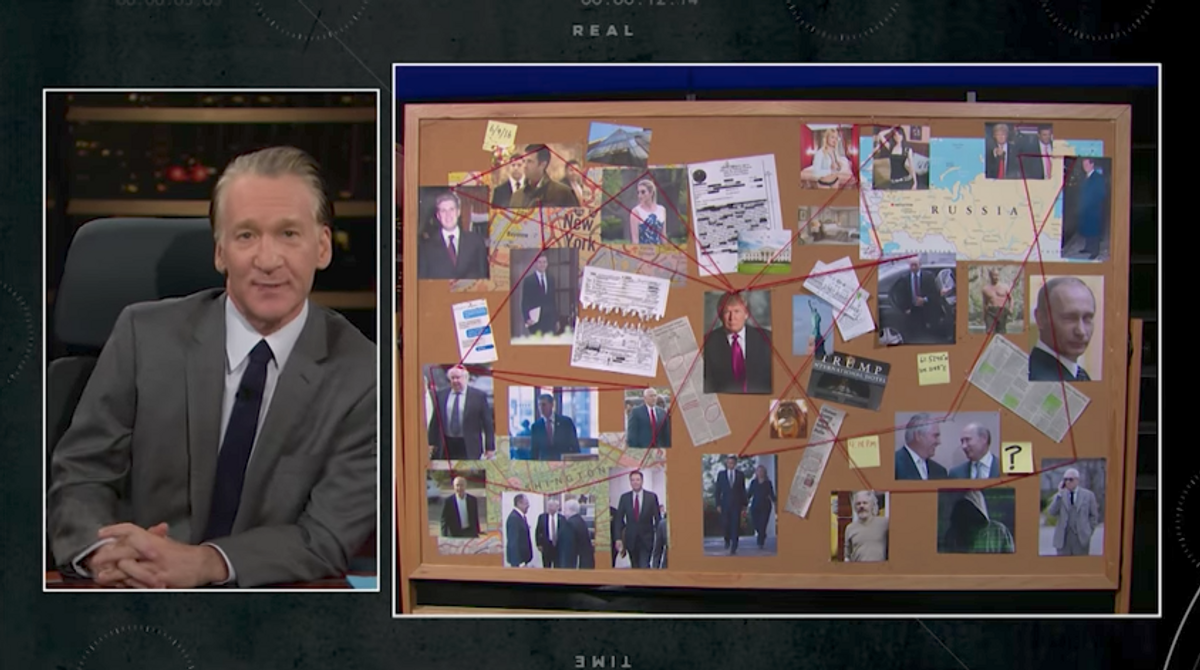 To close out Friday Night's "Real Time" comedian Bill Maher decided to become a detective in order to breakdown how President Donald Trump is connected to Russian President Vladimir Putin and the Kremlin.

The late-night comedian used a bulletin board that was filled with pictures of various Trump administration officials, his sons, close friends and former campaign officials. The board reflected a television crime scene investigation and each picture of the subject was connected to other pictures through lots of red yard.

"The Russia scandal is complicated and that makes a lot of people shrug it off," Maher said. He was referring to the ongoing special counsel investigation led by Bob Mueller, who is investigating the Trump campaign's alleged ties to Russia. But Maher was determined connect the dots between Trump and the Kremlin.

In Maher's theory he explained that Trump's connections with Russia stemmed all the way back to the 1990's and eventually tie together a plot with Wikileaks and the Kremlin that helped him win the election and defeat Hillary Clinton.

"It all adds up," Maher said. "The only thing we don't have is a confession." The late-night comedian then showed a clip of Trump in which he denied any collusion with the Russians.

"Watergate was follow the money, this case is roll the video tape," Maher said. "And it all points to a Russian plot.

He added, "To degrade our faith in democracy, install a puppet state and fuck over an old enemy."

Maher stepped off his stage and walked over to the crime scene board and flipped it over to reveal a picture of Trump lying on a bed and said, "but hey, I guess it could just be a fat guy on his bed," a reference to when Trump said a 400-pound man in his bed could have hacked the DNC.