Duck and cover all over again 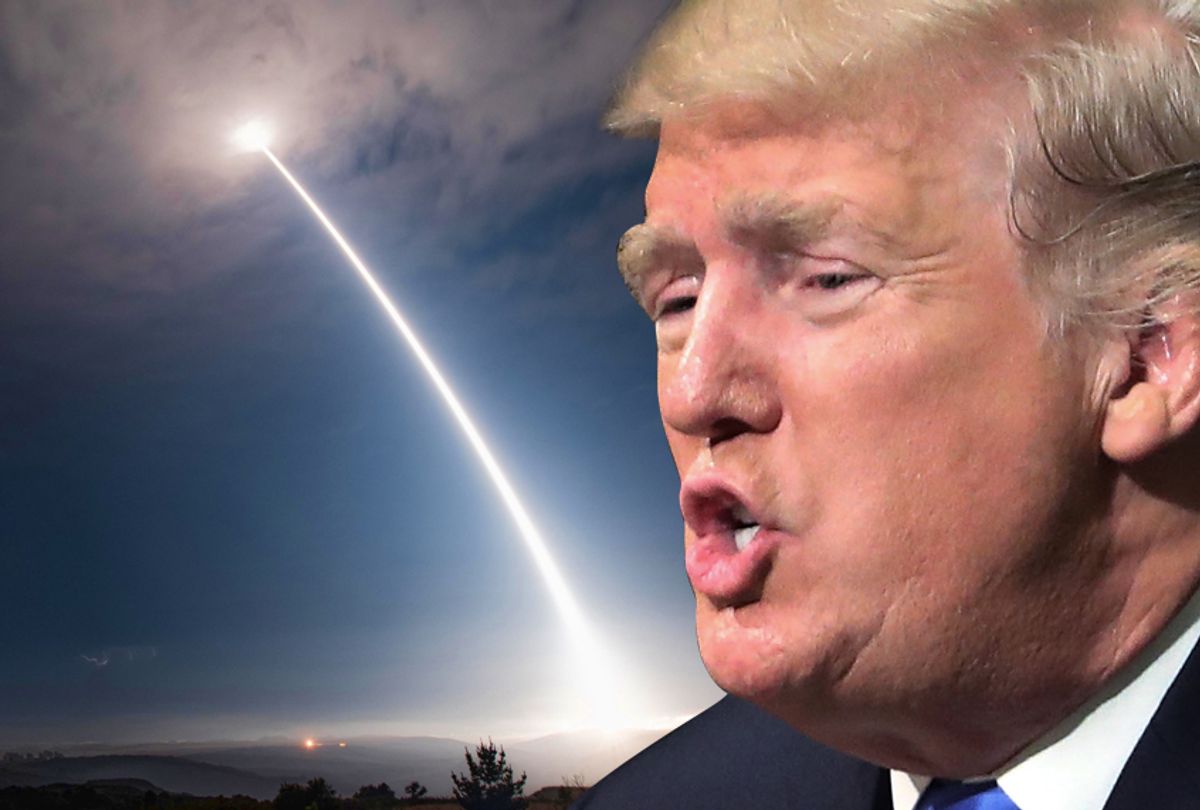 These powerful battlefield weapons were deployed in West Germany against the USSR and in South Korea against North Korea. It was what you might call the good old days of tac-nukes, back when war with our enemies was envisioned not only as possible, but winnable, even against the fearsome USSR. The years leading up to the Cuban missile crisis, during which President John F. Kennedy and Soviet Premier Nikita Khrushchev faced off over Russia’s deployment in Cuba of nuclear armed ballistic missiles capable of striking the United States, were tense, fearful. This was back in the days when we had drills at school preparing us for nuclear attack by ducking under our desks with our hands over our heads or lining up in the hallways up against the lockers with our arms wrapped around our knees. My father, as part of his job at Fort Leavenworth as a “special weapons” expert, used to travel around the states of Kansas and Missouri with a 16mm projector showing a black-and-white movie of early nuclear tests carried out in the desert of Nevada back in the 50s. You may have seen stills from that movie, or even brief excerpts on YouTube. In the distance, a nuclear bomb explodes, and in the foreground, wooden buildings and cars and trucks are hit by the blast wave, knocked down and thrown around like children’s toys. The film was supposed to frighten everyone into some kind of nuclear panic, or perhaps torpor, which would make them receptive to stuff like duck-and-cover drills at their kids’ kindergartens or maybe even encourage them to build what was called a “fallout shelter” in the backyard.

I’m bringing up this relatively ancient and rather silly-sounding history because the words “Cuban missile crisis” and “tactical nuclear weapons” keep cropping up in the news recently. Only this week, The Los Angeles Times quoted retired Navy Admiral James Stavridis as saying, “We are closer to a nuclear exchange than we have been at any time in the world's history with the single exception of the Cuban missile crisis.” A day after he said that to the L.A. Times, Stavridis was quoted in Vox as telling a symposium at the University of Pennsylvania, “I think there’s a 10 percent chance the wheels really come off and we have a full-on war on the Korean Peninsula, which would include nuclear use. That’s well over double what it was three months ago.” Stavridis is what they refer to longingly in Washington D.C. as a very serious man. Currently the Dean of the Fletcher School of Law and Diplomacy at Tufts University, he had a 37-year career in the Navy, including four years as Supreme Allied Commander of NATO. He was said to be in the running as Hillary Clinton’s vice presidential pick, and Trump was rumored to have had him on the list for Secretary of State. So when guys like Admiral Stavridis start talking about a nuclear exchange on the Korean Peninsula, we should sit up and pay attention, don’t you think?

The South Koreans certainly think so. Defense News reported recently that Secretary of Defense James Mattis and South Korean Defense Minister Song Young-moo discussed returning tactical nuclear weapons to South Korea during a visit Mattis made there in early September. Tactical nukes were removed from South Korea by the United States in 1991 as part of a deal during the first Bush administration to get North Korea to lay off its nuclear development program. That was 26 years ago, and along with every other attempted deal since then, it didn’t work. With North Korea testing nukes and firing off new ballistic missiles every other week or so, it wouldn’t surprise me at all if our tactical nuclear weapons have made their way back onto South Korean soil already. Tactical nuclear weapons are distinct from strategic nukes in that they can be limited in the amount of damage they do. For example, a tactical nuclear strike on North Korea could be used to take out military installations and headquarters, centers of government and communications control, and every kind of weapons launching platform you can think of without doing extensive damage to population centers.

In reality, they wouldn’t have to actually be deployed in South Korea at all. The long list of tactical nukes I ran down above were retired long ago. According to James McKeon, a nuclear weapons analyst at the Center for Arms Control and Non-Proliferation, our tactical nuclear arsenal today consists of 500 B61 thermonuclear gravity bombs capable of being fitted with warheads as powerful as 340 kilotons all the way down to the less than 1 kiloton range. These bombs are capable of being dropped by Air Force F-16's, F-15 E's, and B-52, B-1 and B-2 bombers, as wells as a variety of aircraft carrier based Navy aircraft including the F/A-18 Hornet, the A-6 Intruder and the A-7 Corsair II. Air Force fighter jets like the F-16 and F-15 are deployed at one of three Air Force bases in Japan, or at Anderson Air Force Base in Guam, where on August 10, during North Korea’s nuclear arms flexing, the U.S. deployed a “show of force” consisting of a fly-in by B-52’s, B-1’s and B-2’s. All these types of aircraft can be outfitted to carry B61 tactical nuclear bombs and all can reach North Korean airspace from Guam with refueling. All of the Navy’s fighter-bombers can be easily launched from carriers stationed within striking distance of North Korea.

It seems like everyone is running down one scenario or another trying to figure out what would happen if some kind of war — conventional or nuclear, take your pick — broke out with North Korea. The L.A. Times ran through a few good ones in a major story early last week. War game simulations used to begin with a provocation or misunderstanding by North Korea along the DMZ. Today, however, the situation is different. The L.A. Times quoted the ubiquitous Admiral Stavridis as suggesting one scenario that might begin with North Korea landing one of its missiles on or near Guam. The U.S. might respond by taking out a North Korean missile launch facility with a Tomahawk missile with a conventional warhead. North Korea might fire an artillery barrage at U.S. forces deployed along the DMZ. The U.S. might be moved to launch artillery strikes, drone attacks, or airstrikes on the 11,000 artillery pieces North Korea has dug into mountainsides north of the DMZ. North Korea might escalate by launching an artillery barrage on Seoul. And we’re off to the proverbial races. Seoul has a population of 25 million. There are 35,000 American troops in South Korea. Estimates are that as many as 20,000 South Koreans could be killed each day in an exchange of conventional artillery with North Korea. This level of loss of life would be obviously unacceptable to both South Korea and the U.S. and might bring on a tactical nuclear strike on North Korea’s artillery along the DMZ, which would doubtlessly cause North Korea to use its nuclear arsenal. It’s unknown what North Korea’s capabilities are when it comes to actually using its nuclear weapons, but any exchange of nuclear weapons at all on the Korean peninsula would be devastating. The last war was savage enough without nukes. 2.5 million Koreans were killed over a three year period, over 20 percent of the Korean population as a whole. 36,500 American soldiers lost their lives. More than 600,000 Chinese soldiers were killed. Trump's statement at the U.N. that if the U.S. “is forced to defend itself or its allies, we will have no choice but to totally destroy North Korea,” sounded like a threat to use strategic nukes against them. Most experts doubt it will come to that, but if it did, loss of life on the Korean peninsula could be in the tens of millions.

Bloomberg and several other news outlets have published versions of the procedure that would be followed if President Trump decided to launch a nuclear strike with ballistic missiles, presumably in response to the detection of the launch by North Korea of a nuclear armed ballistic missile or missiles aimed at the United States. Basically the scenarios depict a process that would take about five minutes from the time the president makes his decision to launch a ballistic missile strike until the crews at land-based or submarine-based missile facilities actually decode the launch command and push the nuclear button. I can’t be sure — the procedures are top secret, so who could be sure? — and the rationale for using tactical nuclear weapons would be different. A decision to make pre-emptive use of tactical nuclear bombs might be made before North Korea fired a nuclear armed missile but after they had caused massive casualties in the south by shelling Seoul. But it seems to me that using tactical nuclear weapons would take quite a bit longer and go through a different command structure. Because our current tactical nuclear arsenal consists of 500 gravity bombs dropped by any one of several kinds of Air Force and Naval aircraft, the command would have to be passed down through channels, most likely through the Pacific Command in Hawaii, probably to the 36th Air Wing in Guam and the Navy’s 7th Fleet in Yokosuka, Japan. From there, the command would be transmitted down to Air Force air groups and Navy carriers until the command reaches fighter or bomber squadrons. Once the order actually reached the squadrons, the B61 bombs would be removed from secure storage and loaded onto land and carrier based jets and bombers, which would be dispatched to drop them on targets in North Korea.

A lot could happen while all that was taking place. Facing the obliteration of its command structure and political leadership, North Korea could capitulate, or it could launch whatever nuclear tipped missiles it is capable of using. All of these scenarios have at their core the vagaries of two unhinged men and make the days when John F. Kennedy narrowly avoided a nuclear war while we practiced for it in our schools seem like a time of innocence. That Donald Trump and Kim Jong-un might end up making us duck and cover for real is all we really need to know about where our last election has left us.