Now that we know the Vegas shooter was white, a reassuring narrative: He was a "lone wolf," not a "terrorist" 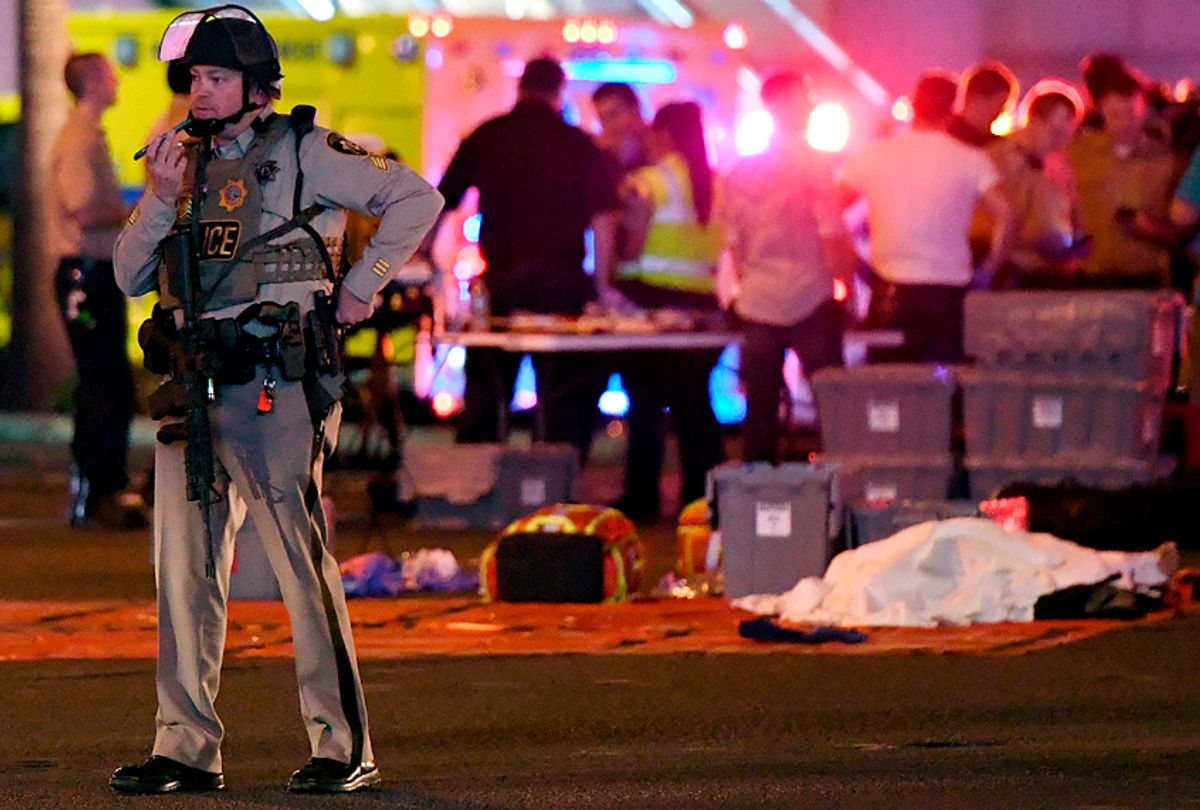 A Las Vegas Metropolitan Police officer stands after a mass shooting at a country music festival on October 2, 2017. (Getty/Ethan Miller)
--

As I watched the news unfold about the horrible mass shooting in Las Vegas during the late-night hours of Sunday and Monday, I said to myself, "Please God, don't let these killers be black." I doubt I was alone in such sentiments. In a country stuck in the grip of a white backlash and resurgent white supremacy, black and brown folks don't need any further troubles.

As the initial news reports twisted and turned, I remembered how many initial reports about mass shootings are rife with inaccuracies, born of panic and chaos and the human desire to make sense of mayhem and murder. I then said to myself, "Please God, don't let this killer be a Muslim." I doubt I was alone in those sentiments. Muslim Americans are overwhelmingly a peaceful and law-abiding people. The challenges they face in America are already too great.

I had another fear as well. If the mass shooting in Las Vegas had been committed by a Muslim or a person of color, it might have presented an irresistible opportunity for Donald Trump -- who is a racial authoritarian and (as I believe) a fascist -- to expand his power. As historian Timothy Snyder has warned, Trump is waiting for his own "Reichstag Fire moment." A terrorist attack on a major city could well provide that opportunity.

I breathed a sigh of relief when it was revealed by Las Vegas police that it was a white man who rained down death and pain into a crowd of concertgoers. I doubt I was alone in such a sentiment. His barbaric actions killed at least 58 people and wounded hundreds more.

Whenever a white man commits an act of mass gun violence in America -- politically motivated or otherwise -- there is a cultural script that is closely followed by the mainstream news media, politicians and too many members of the public. This narrative is obvious and predictable. Alas, it provides some small measure of comfort to many, even if that familiarity is rooted in gross hypocrisy and flagrant contradictions.

Unlike the impulsiveness he has shown when Muslims are accused of committing a terrorist act, either in the United States or abroad, Donald Trump will be reserved and careful in his statements. The American news media will respond by observing that Trump has now magically become "presidential," as if his sins could be washed away by a chattering class desperate to make the abnormal into something palatable and routine.

The National Rifle Association and the Republican politicians whom they own will default to irrational talking points: "Now is not the time to politicize a tragedy" or "It's too early to talk about gun laws." Gun manufacturers will see their stocks rise in value. America's addiction to guns will continue unabated even as it kills tens of thousands of people a year. Somehow the gun fetishists like Bill O'Reilly will mouth such absurdities as "guns are the price of freedom" without soiling themselves from uncontrollable laughter.

The alleged shooter is a man named Stephen Paddock. He has been described as a "lone wolf." The Las Vegas police have now offered up two new entries for America's mass shooting lexicon: Paddock is a "sole perpetrator" and a "local individual." He is not a "terrorist," since that term is almost exclusively reserved for nebulous brown people.

Stephen Paddock is being humanized as a man who "liked to gamble," "listened to country music" and "lived a quiet, retired life." When white folks commit horrible crimes their actions are often placed in a context where they are described as "good people" and "all American." This is all so "surprising" and "unimaginable," we are told, because this person was so "ordinary." By comparison, when black or brown folks or Muslims commit horrible crimes they are usually depicted as one-dimensional monsters.

There will be no "national conversation" about the connection between toxic (white) masculinity and American gun culture. In the mainstream news media and broader public discourse there certainly will be no discussion of the fact that white men are 31 percent of the population but commit 63 percent of mass shootings. Such a fact is forbidden or explosive, because it connects race, gender, guns and death.

The mass shooting in Las Vegas on Sunday night is the 273rd such event in America so far this year. It will not be the last. When the next mass shooting occurs I might just as well take this article and update it. The facts will likely not be much different. America is addicted to guns. The sickness will not be cured until, like an alcoholic or an opioid addict, the country admits it has hit rock bottom.