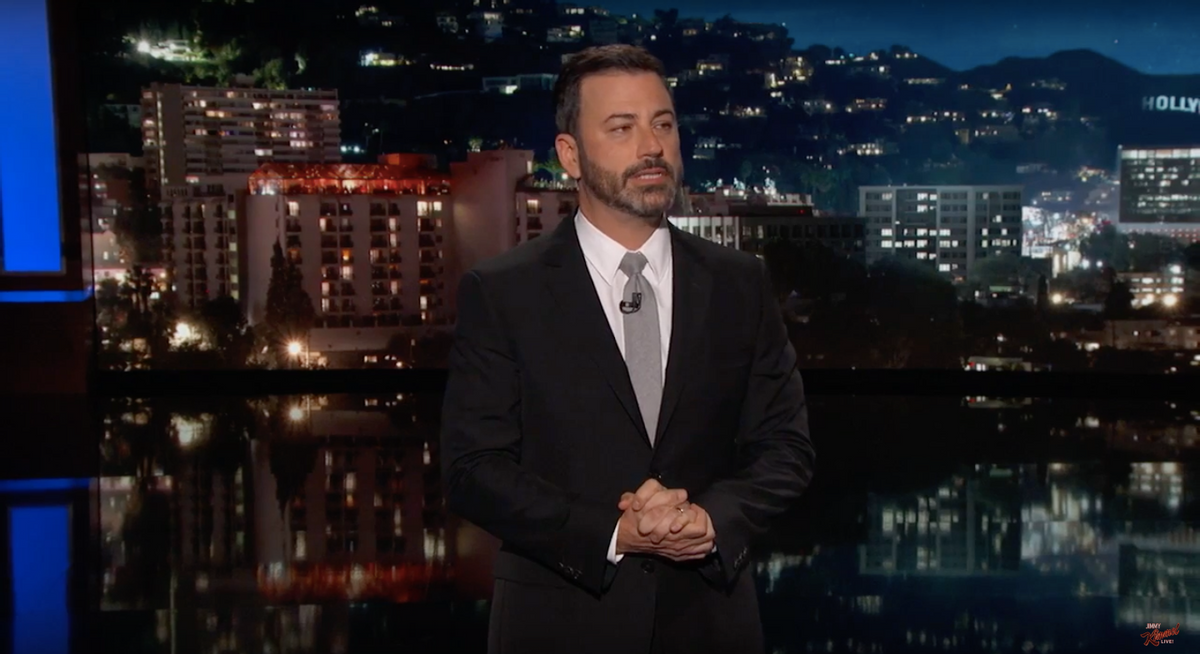 The late-night TV hosts almost have a formula for the way they address the latest mass-shooting in America. Usually they give a somber, reverent monologue before the comedy begins. On Monday, a visibly shaken Jimmy Kimmel, who's from Las Vegas, went beyond the typical condolences. Just as he did during the health care debate, the host of "Jimmy Kimmel Live!" called on Congress to do the right thing, in a moving a monologue.

"A very sick person smuggled 17 guns into his hotel room and smashed out the windows, started firing indiscriminately from the 32nd floor into a crowd of 22,000 people across the street," Kimmel said at the beginning of his show. "And as a result of that, this morning, we have children without parents and fathers without sons, mothers without daughters. We lost two police officers. We lost a nurse from Tennessee. A special ed teacher from a school here in Manhattan Beach."

"It’s the kind of thing that makes you want to throw up or give up; it’s too much to even process," he added. "All these devastated families who now have to live with this pain forever, because one person with a violent and insane voice in his head managed to stockpile a collection of high-powered rifles and use them to shoot people."

Kimmel said he had been reading comments online from people who say this is a terrible tragedy but that nothing can be done about it.

"I disagree with that intensely," he said. "Because of course there’s something we can do about it; there’s a lot of things we can do about it. But we don’t, which is interesting. Because when someone with a beard attacks us, we tap phones, we invoke travel bans, we build walls, we take every possible precaution to make sure it doesn’t happen again. But when an American buys a gun and kills other Americans, then there’s nothing we can about that."

"I want this to be a comedy show," he later said. "I hate talking about stuff like this. I just want to laugh about things every night, but that — it seems to becoming increasingly difficult lately. It feels like someone has opened a window into hell. And what I’m talking about tonight isn’t about gun control, it’s about common sense. Common sense says no good will ever come from allowing a person to have weapons that can take down 527 Americans at a concert. Common sense says you don’t let those who suffer from mental illness buy guns."

"The Daily Show" host Trevor Noah provided his audience Monday with an analogy. Second Amendment activists often insist that this is not the time to be talking about guns after a tragedy. Noah said he wished he used this line after getting into trouble as a child.

"Sometimes I wish I had used this logic as a kid when I’d done something wrong," he said. "You know, my mom wanted to ground me. I should have just said, ‘Is this the time, Mom, that we politicize what is happening right now? This is not the time to talk about my lack of discipline. This is a time for us to unite as a family, to focus on the fact that I’m stuck in the kitchen window trying to sneak back in. Come on, Mom. This is not the time.’”

He then noted that on Congress' agenda this week was the exact opposite of this country needed.

“Just to give you an idea of how far away America is from actual gun control, this week Congress is going to vote on deregulating gun silencers," he said. "Because I guess Congress is thinking, ‘Gun violence is out of control — how can we make it quieter?’”

To begin his monologue Monday, "The Late Show" host Stephen Colbert offered his condolences to the victims of the tragedy. He then called on President Trump and Congress to show some courage in this time of mourning.

"Obviously, this is a comedy show but it's one that talks about what happens every day," he said at the outset of his show. "And today the national conversation is about the shooting in Las Vegas and jokes aren't appropriate to address the shock and the grief and the anger we all feel."

"The Late Late Show" host James Corden also gave a touching tribute to the victims Monday. The English-born entertainer offered some perspective in his monologue, providing context on what gun violence means in America.

“Last night was the biggest mass shooting in United States history. That’s a record that’s been set twice in just the two and a half years that I’ve been living in America,” he said. “Here’s another statistic: 11,660 people have died from gun violence in the last 275 days in this country. Now I come from a place where we don’t have shootings at this frequency, so it’s hard for me to fathom. But it should be hard for everyone to fathom. Gun violence should not be a staple of American life. Some say it’s too early to talk about gun control. For those victims last night, it’s far too late.”

“Forgive me, as I’m just a foreigner here and some of you may feel I have no place to say this, but how does every other developed country do a better job of preventing these attacks? We can’t be surprised that gun crime will always occur when there is such wide availability of guns,” he said