Safety at a music festival, like few other public events, requires a covenant between organizers and attendees 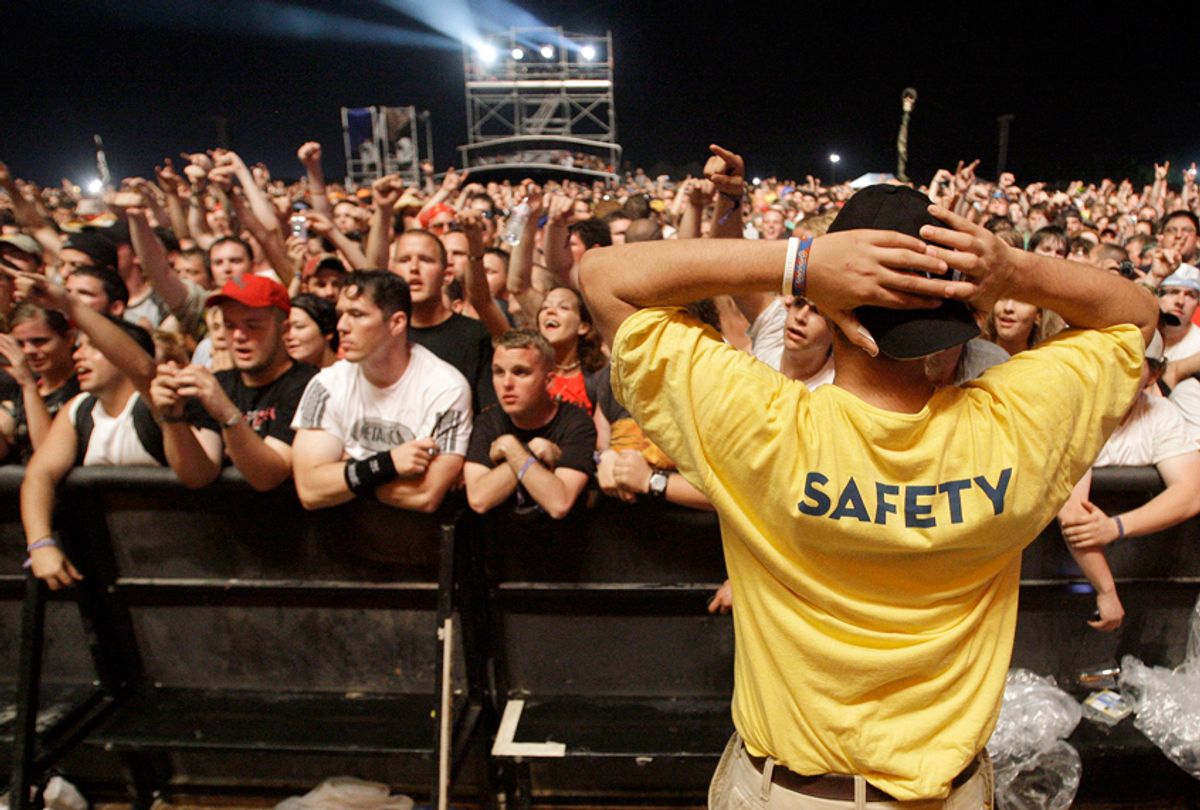 Two days after the mass shooting at Las Vegas' Route 91 Harvest Festival that killed 59 people and injured over 500 additional concert-goers, it's still difficult to find any words — much less the right words — to talk about what happened. How do you even begin to grapple with the sadness and horror? First-person recollections of fans and journalists fleeing the shooting are harrowing; the fear and panic leaps off the computer screen. Photos and video from the concert are even more horrifying, as they underscore the chaos and confusion that quickly ensued.

The Route 91 Harvest Festival wasn't a new event — this year's model was its fourth edition — and, by all accounts, it's a well-run festival helmed by Live Nation. Plus, Las Vegas itself is used to hosting music festivals and large-scale events: Yearly events include the electronic music behemoth Electric Daisy Carnival, pop-leaning iHeartRadio Festival, rock 'n' roll-leaning Punk Rock Bowling and Psycho Las Vegas, and even the Academy of Country Music Awards. And music festivals have increasingly become part of U.S. concert culture: In 2015, Nielsen’s Audience Insights Report on Music Festivals found that 32 million people attend at least one music festival in the U.S. each year, with 46 percent of attendees falling in the 18-34 age range.

There's a certain amount of trust that goes into attending any concert (or, really, any event in a public place). However, a music festival especially requires a covenant between organizers and attendees. The event often takes place outdoors — sometimes in an off-the-beaten-path place, but other times in parks or green spaces tucked away within cities — and draws thousands of people. Logistically, there are so many things that could go wrong; everyone involved has to work hard and have faith that everything will turn out okay. That music festivals are becoming more common means they feel like safe bets for a fun weekend.

That Las Vegas turned into a tragedy is devastating on myriad levels — not least because being attacked while watching or listening to music feels particularly violating. Going to see a favorite artist perform is like entering a sanctuary, as it's an opportunity for real-life worries or concerns to fade away for a few hours. In fact, the recent high-profile attacks at the Manchester Arena and Pulse Nightclub in particular were so shattering because they invaded physical sanctuaries for tight-knit communities — respectively, Ariana Grande devotees the Arianators and Orlando's LGBTQ community.

Country music fans represent another loyal community, one populated by rabid music fans. In a Rolling Stone Country recap of a Nashville vigil, Keith Urban described how he explained the shooting to his daughter: "These were innocent people, horrifically taken. They're like family. It's the one thing about country music that's always been at the center of it, and that it is [a] community, it's about community. And so I did know those people in that way, and it just really hit me." Reading about those who died is wrenching: Many people had traveled great distances to attend the Route 91 Harvest Festival, no doubt because it would be a chance to have a blast in Las Vegas and hear some great tunes.

Thankfully, while the shooting itself has stirred up a hornet's nest of political vitriol, most people have stayed away from disparaging the beliefs of country music fans. (In a notable exception, a vice president and senior legal counsel at CBS in New York was fired after saying she's "actually not even sympathetic" to the victims "bc country music fans often are Republican gun toters [sic].") On Monday morning, NPR music critic Ann Powers pre-emptively tweeted a plea to be mindful of the fact that country music fans aren't a monolithic group. "Not all country music fans are right wing and a lot of people died so maybe we should wait on hot takes reading the cultural angle," she wrote. "That said, in the wake of grieving I look forward to a vigorous open discuss within among country artists about gun violence."

That conversation is starting already in certain circles. Roseanne Cash penned a no-holds-barred New York Times op-ed urging country musicians to stand up to the NRA, while Caleb Keeter, who performed at the festival earlier on Sunday, wrote on Twitter "I've been a proponent of the 2nd amendment my entire life. Until the events of last night. I cannot express how wrong I was." And Maren Morris, who performed at the music festival on Friday, released a song called "Dear Hate" to benefit the Music City Cares Fund and shared, "Hate is everywhere, and I'm sick of not doing enough. In the darkest tunnel, there is still love & music. That's what it's here for."

But what's even more frightening is that it seems like there's no clear way the festival itself could have anticipated or prevented the mass shooting. "With this tragedy, I think the true reality of it is: What could have been done here? There’s nothing from a production of the event angle that could be done," a promoter and talent buyer at a "large national agency" told Esquire. "We could get into gun control all day and talk about that and what could be done there. But at the event level, what do you do to stop that? You don’t."

Later in the article, a festival promoter who wished to remain anonymous added, "You plan for as much as you can, you rely on the police, and local intelligence agencies, but nobody on the festival side really. . . . I don’t know of any festivals that run active shooter drills or things like that.

"If you’re in a field in the middle of nowhere and you've got a private security team, you'd do things one way, in a downtown urban setting with the amount of officers and police that most of us deal with, you have conversations, you usually have plans in place if the worst happens."

It's human nature to want to know why something horrific happened, or what drove someone (in this case, Stephen Paddock) to deliberately try and assassinate thousands of people, so these tragedies can be prevented in the future. However, it's sobering to realize there's no clear-cut, failsafe solution — short of increased gun control — to ensure Las Vegas never happens again.

There's no need to rehash America's complicated history with the Second Amendment and gun regulations (after all, Twitter has plenty of examples and arguments for anyone interested), and legislators are long overdue to take concrete steps to address the root causes of mass shootings. But it's also true that festivals aren't going away because of the Vegas shooting: A 2016 study with survey data commissioned by ticketing platform Eventbrite found that avid festival-goers are huge reasons for the ongoing success of these music events. Overall, the concert industry is also a behemoth. Pollstar's 2016 year-end report found that North America's top 100 tours grossed $3.34 billion on the strength of 43.63 million tickets sold, both records.

It's far too soon to speculate on what long-lasting changes will come from the Route 91 Harvest Festival shooting. However, the resilience, strength and fellowship shown by fans and artists alike illustrate that country music won't be cowed or deterred by the murderous actions of one man.