Samantha Bee: "If you're shocked by this, then you are not Puerto Rican" 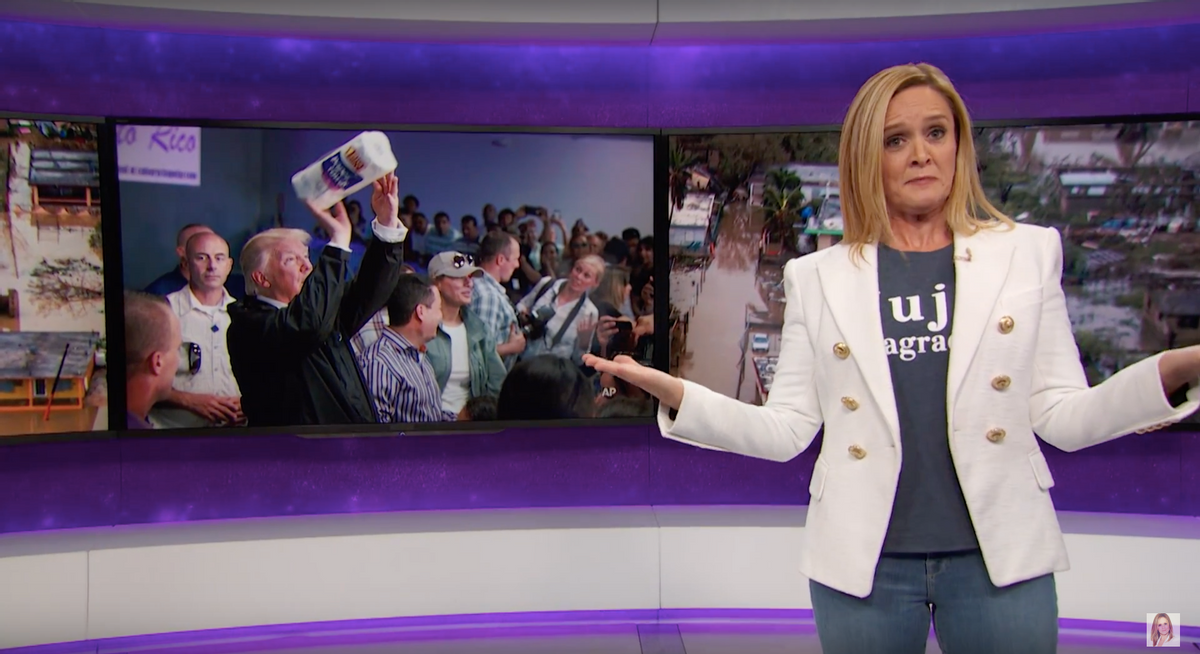 Puerto Rico, still dealing with the fallout of Hurricane Maria, was met Tuesday with a "category five tsunami of self-congratulation," Samantha Bee said during her monologue on "Full Frontal" Wednesday night. The late-night comedian was referring to President Trump's obscene trip to the Caribbean island, where he briefly met with locals and talked about how burdensome their recovery was for the nation.

Trump insisted that the federal government has gone all out to help Puerto Rico, and in turn he had received the highest grades from officials. He also noted that Hurricane Katrina was far deadlier than Maria, which he chalked up as a win for his administration.

"The lowest score doesn't win, doofus. A hurricane is not a golf game, or an election," Bee said, a slight to Trump's popular vote loss.

Bee did note that Trump was not the only one minimizing Puerto Rico's devastation. Even The New York Times front page failed to cover Puerto Rico as it did Houston and south Florida.

"If you're shocked by this, then you are not Puerto Rican," Bee said. "Truth is, we've been treating them like the unwelcome nephew under America's stairs for more than a century."

Bee then provided her audience a primer on an "obscure little shakedown" known as the Jones Act, a law passed in 1920 after World War I to protect the U.S. shipping industry. It requires all trade between U.S. ports be done on U.S. merchant ships built in the U.S. and manned by American sailors.

"It also mandates that each boat be crewed by a Native American, a construction worker, a cowboy and a gay stripper, which is a very expensive mandate, especially for Puerto Rico where all necessities come in by boat," Bee joked. "Why is that again?"

"Full Frontal" then cut to a clip of Trump explaining that Puerto Rico was an "island surrounded by water." With failed projects such as Operation Bootstrap and the global economic crash, Puerto Rico's economy has never really recovered. So when Trump was caught on camera throwing paper towels into a crowd of hurricane victims, one can imagine that Puerto Ricans did not exactly feel thankful.

"Right now half the population still doesn't have drinking water to soak up with all those free paper towels POTUS chucked at that them before declaring mission accomplished," Bee said.