Our two parties have long represented different views of American society, but the chasm is only getting deeper 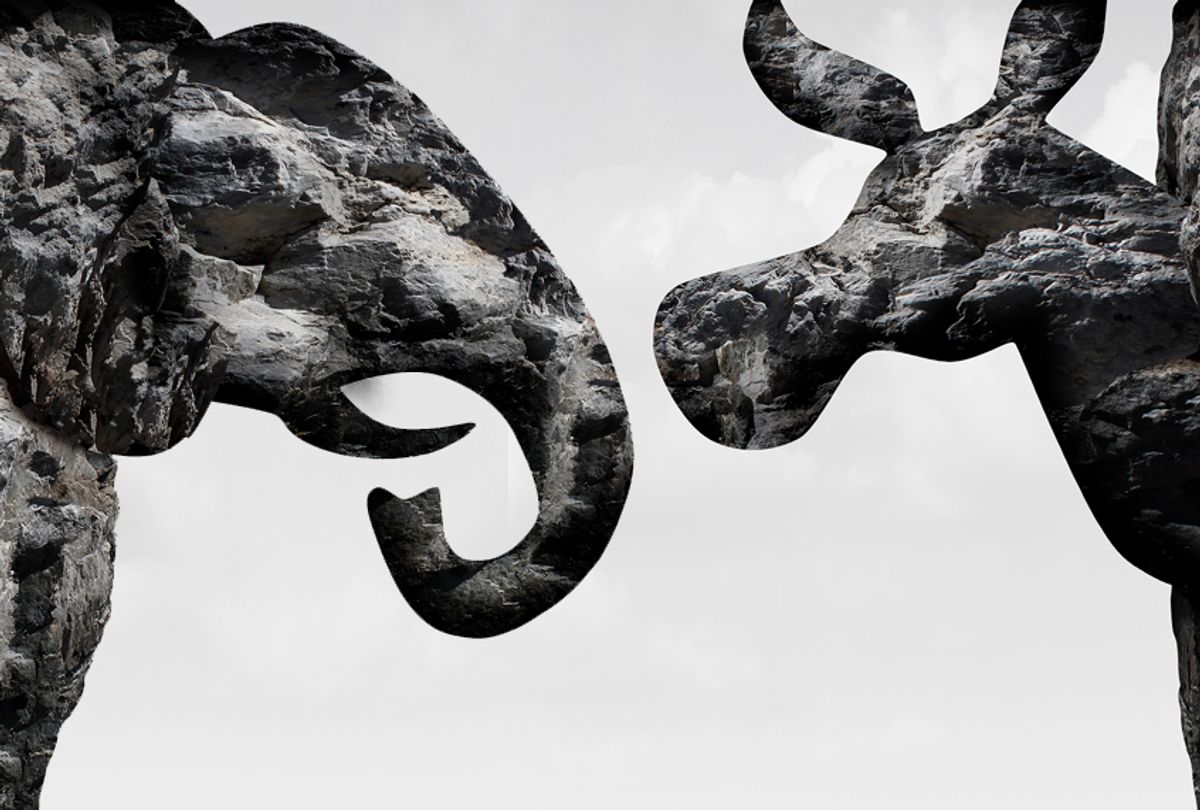 The last five days of horrified shock in the wake of the carnage in Las Vegas last Sunday night have revived the debate over gun safety in this country -- at least for a few days, until our attention turns elsewhere. Right now it appears there is some willingness to talk about regulating the "bump stock" device that allowed the shooter to make his semiautomatic weapons fire as fast as a machine gun, which is a modest concession. The NRA stepped up to the plate to suggest that their good friends at the Alcohol, Tobacco, Firearms and Explosives write up some new rules. So who knows, maybe it will actually happen.

I wouldn't hold my breath. If there's one issue that always exposes the deep divide in his country, it's guns. In fact, it may be the most polarizing issue of all. According to the New York Times' Upshot, Americans may be "deeply split along demographic lines, but there aren’t many demographic characteristics that embody America’s cultural divide better than gun ownership." Polling by Survey Monkey after the election found that:

Over all, gun-owning households (roughly a third in America) backed Mr. Trump by 63 percent to 31 percent, while households without guns backed Mrs. Clinton, 65 percent to 30 percent. ... No other demographic characteristic created such a consistent geographic split.

After every massacre that isn't perpetrated by a Muslim (in which our attention is always focused on the motive, not the act itself) we go through this ritual of pretending as if the latest bloodletting will somehow bridge this cultural chasm. It never does. The gun divide represents deeper divisions that are only getting worse.

The Pew Poll released a new study this week on partisanship and values that suggests the gap between Democrats and Republicans is only getting wider on issues of race, immigration, the role of government and even things as basic as how and where we choose to live. Both parties are developing an acute hostility toward the other and are becoming more ideologically consistent.

The poll first started asking 10 specific questions about political values 23 years ago and at the time there was a 15 point difference between the two parties. In 2014 it was 33 points. Today it's up to 36. But it's in the specifics that the survey data is most revealing.

For instance, people were asked to choose which sentence they agreed with more: “The government should do more to help needy Americans, even if it means going deeper into debt,” or “The government today can’t afford to do much more to help the needy.” From the beginning, Democrats have always been more likely to choose the first sentence, but both parties have generally moved together depending on economic circumstances.

In other words, 23 years ago the gap between the two parties on this issue was 21 points. It's now 47 points.

This shift is nearly as stark on the question of race. In the current survey, 41 percent say that racial discrimination is the reason African Americans have a hard time getting ahead, while 49 percent say they are personally responsible if they cannot advance. That 41 percent is the highest number recorded in the survey's history, and that shift is entirely because Democrats views have changed dramatically.

The two parties have always differed on economics but today the Democrats are much more aligned, with 82 percent agreeing that our economic system unfairly benefits powerful interests. Among Republicans, 50 percent say the system is fair to most Americans while 46 percent disagree. Seventy-seven percent of Republicans believe that people can get ahead if they work hard, while 49 percent of Democrats agree. Interestingly, college-educated white Democrats are even less likely than African-Americans and Hispanics to believe hard work is no guarantee of success.

The divide between the parties has grown wider over time but it's accelerated recently -- and that's largely because Democrats are becoming more liberal. (I'm tempted to say that it would be impossible for Republicans to get any more conservative, but that's clearly not true.) The survey doesn't address the question of why that's happening, but I'd guess some of it has to do with the age demographics of the two parties. The millennial generation is much more likely to be Democratic and also much more liberal. Republicans are aging and getting more conservative.

But mostly I think it's that conservatives and liberals have finalized the realignment that began back in the 1960s, when the civil rights movement and the GOP's cynical "Southern strategy" changed the two parties' centers of gravity. Both parties are now more ideologically and culturally homogeneous than they've ever been in the modern era.

Whatever the reasons for this deepening ideological division, it will make this political period exceptionally difficult. The American system has a bad track record in dealing with intense polarization, as a look back at the decades before the Civil War will tell you. Many of the fundamental issues that animate the divide today are similar to those that splintered the nation back in the 1850s. Indeed, they have never been fully settled, and one symptom of that is the election of the most openly racist president in a century.

The good news is that there are more Democrats and Democratic leaners than there are Republicans, and they are moving in a more liberal direction. The bad news is that most of them live in metropolitan areas and the most populous states, and our electoral system was constructed to favor rural areas and small states, which are now the geographic centers of the most reactionary elements of the Republican base -- including gun culture. American politics are going to be turbulent for some time to come.