Is today’s NRA the “price of freedom”?

Someday, people will read about this moment in history books and wonder how we got to this level of insanity 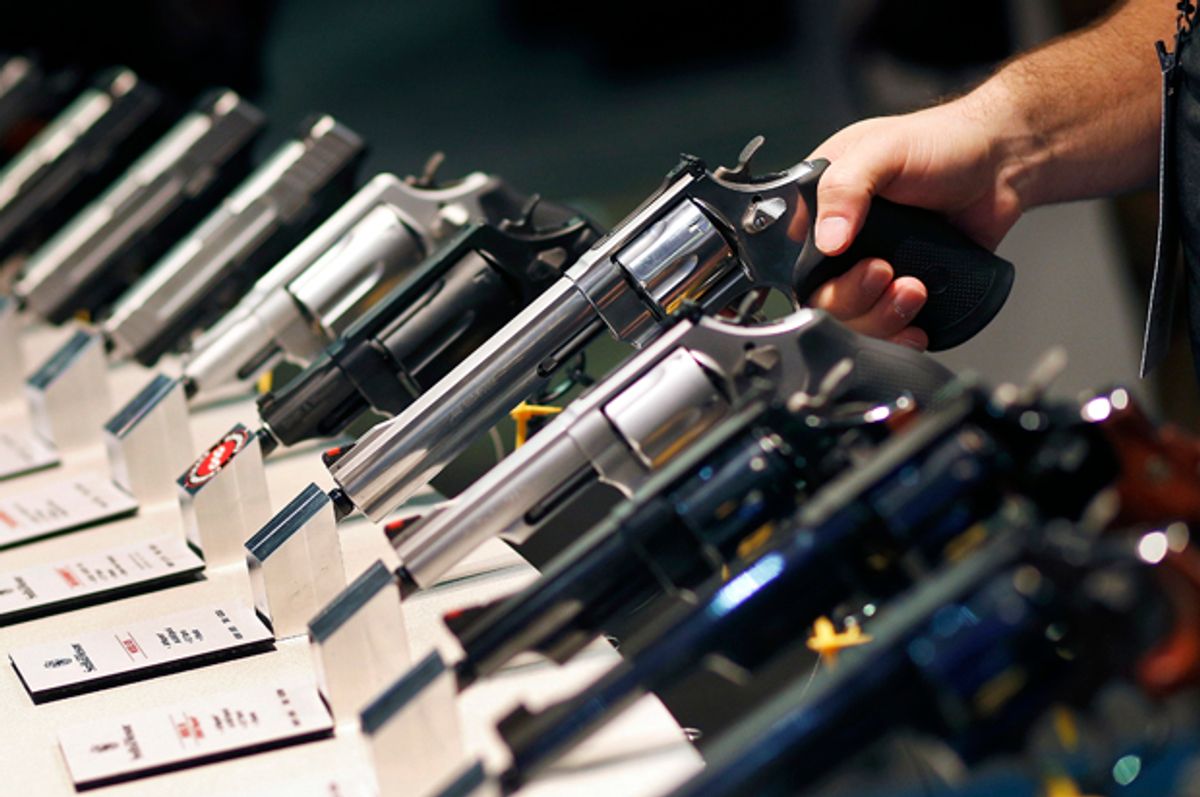 People living in years before the Great Depression probably didn’t realize their world had gone crazy.

In hindsight, how could they miss it? Historical statistics explain the crisis of the 1930s by showing with brutal clarity that financiers and industrialists bought the government and bent it to their will, redistributing the country’s wealth upward into their own pockets and leaving regular Americans panting desperately behind. But as people became more and more insecure, they listened to what politicians and the media told them: that the country was doing wonderfully. If they weren’t, it was either their own fault, or that of immigrants and minorities who were taking their jobs. And people made due on a little less every day, finding they could take a few more hits if only they gritted their teeth a little more.

Until their world was pear shaped.

This same thing has happened to us. The massacre of 59 people and the wounding of more than 500 by a single shooter with an automatic weapon should not feel normal. Someday, people will read about this moment in history books and wonder how we got to this level of insanity.

The story of how the National Rifle Association took on such a poisonous role in our lives is a striking illumination of our descent into madness. In the past, the NRA has been a vital and responsible part of our civic life. The organization began in New York in 1871, in part to improve the marksmanship skills of American citizens who might be called on to fight in another war, and in part to promote in America the British sport of elite shooting, complete with quite hefty cash prizes in newly organized tournaments. Just a decade after the Civil War, veterans jumped at the chance to hone their former skills. Rifle clubs sprang up across the nation.

By the 1920s, rifle shooting was a popular American sport. “Riflemen” competed in the Olympics, in colleges and in local, state and national tournaments organized by the NRA. Being a good marksman was a source of pride, mentioned in public biographies, like being a good golfer. In 1925, when the secretary of the NRA apparently took money from ammunitions and arms manufacturers, the organization tossed him out and sued him.

In 1931, amid fears of bootlegger gangs, the NRA backed federal legislation to limit concealed weapons, prevent possession by criminals, the mentally ill and children, to require all dealers to be licensed, and to require background checks before delivery. NRA officers insisted on the right of citizens to own rifles and handguns, but worked hard to distinguish between, on the one hand, law-abiding citizens who should have access to guns for hunting and target shooting and protection, and on the other hand, criminals and mentally ill people, who should not. The NRA backed the 1934 National Firearms Act, and parts of the 1968 Gun Control Act, designed to stop what seemed to be America’s hurtle toward violence in that turbulent decade.

But something happened to the NRA’s reasonable approach to civic responsibility. In the mid-1970s, a faction in the NRA forced the organization away from sports and toward opposing “gun control.” It formed a political action committee (PAC) in 1975, and two years later elected a president who abandoned sporting culture and focused instead on “gun rights.”

The NRA had gone into politics, and it was a politics that looked suspiciously like the politics of other big businesses in that era. Its officials now opposed all limits on gun ownership, even though basic safety measures have always been popular, even within the NRA’s own membership. NRA officials began to work with the movement conservatives who were finding a home in the Republican Party. These men called themselves conservatives, but they were radicals, determined to dismantle the social protections and business regulation of the New Deal that had kept America stable since the Depression. They insisted that any infringement on business was a form of communism. Movement conservatives attracted voters by insisting that “liberal” social-welfare programs nurtured criminals. This prompted their supporters to arm themselves for protection, increasing gun sales. It was a win-win for the movement conservatives and the NRA.

In 1980, the NRA endorsed a presidential candidate for the first time ever, casting its support to Ronald Reagan. When Reagan took office, a new American era, dominated by movement conservatives, began. And the power of business, and of the NRA, over American politics grew exponentially.

Now a player in national politics, the NRA was awash in money from gun and ammunition manufacturers. By 2000, the NRA was one of the three most powerful lobbies in Washington. It spent more than $40 million on the 2008 election. Gun and ammunition sales took off during the Obama administration, as NRA advocates howled that President Obama would confiscate guns. With the “Trump Slump” in gun sales, as buyers stopped worrying they would lose access to guns, NRA spokesmen upped their rhetoric. Their online videos warn that America is under siege by leftists, and that good Americans must arm themselves for civil war. And the movement conservative Republicans have accepted their money and carved away at business regulations, including those on guns.

And we have gritted our teeth and accepted a mounting death toll from mass shootings until carnage has become normal. Now hundreds of our friends and family are dead and wounded in Las Vegas, in the worst single-shooter massacre in American history.

The American casualties at Mandalay Bay are the horrific embodiment of what happened to America with the rise of movement conservatism: business profits became more important than human lives. Wealth has moved upward dramatically while regular Americans have seen their jobs evaporate, their health fail, infrastructure crumble and the environment degrade. Last week’s figures from the Federal Reserve show that in 2016, the top 1 percent of Americans controlled 38.6 percent of the nation’s wealth, almost twice that of the bottom 90 percent. Also last week, we had the stomach-turning spectacle of Republican Sen. Ron Johnson of Wisconsin telling high school students that health care, food and shelter are privileges. And in the wake of the Las Vegas shooting, Republican media personality Bill O’Reilly called the carnage at Mandalay Bay “the price of freedom.”

The world has gone pear shaped.