Sean Hannity is guilty of "politicizing" mass shootings too

The Fox host says liberals are politicizing the Las Vegas massacre, but he's used other shootings for his agenda 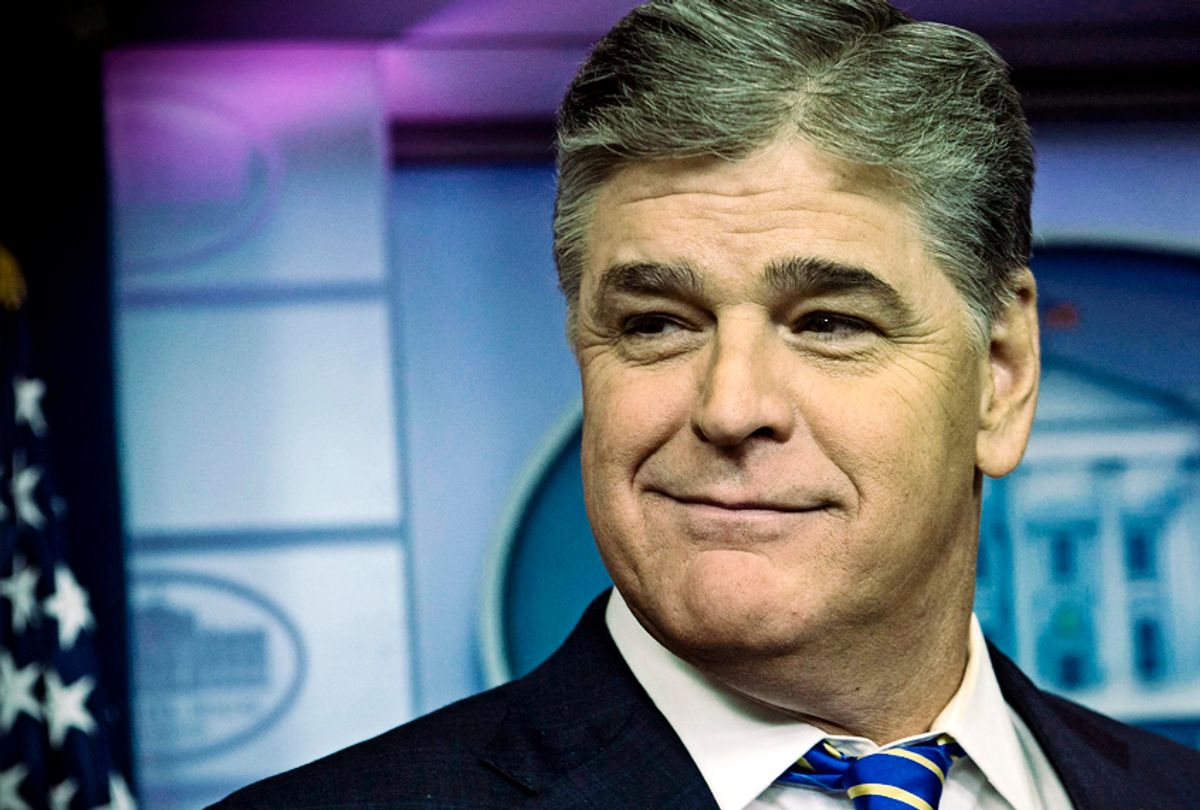 An inherent vice of politics is hypocrisy. Pick an issue or a story and chances are hypocrisy lingers just around the corner.

On Fox News, however, hypocrisy occupies center stage, and Sean Hannity is its frequent co-star. Somehow, he's lionized disingenuousness and his latest venture — railing against liberals for politicizing Sunday's Las Vegas shooting — is no exception.

A day after Stephen Paddock murdered 59 Americans at a country music concert, Hannity lamented on his show the rush to "politicize tragedy."

"Bodies weren't even in the morgue yet," he said. "None of this mattered to the left in this country." The next day, Hannity argued it was "beyond shameful" to watch late-night hosts and Democrats politicize the Las Vegas shooting.

It was not the first time Hannity denounced liberals for politicizing a mass shooting. Days after the deadly, racist-inspired 2015 shootings in Charleston, Hannity took to Twitter to attack the left for pushing gun control.

Liberals are trying to use the tragic #CharlestonShooting to push their political agenda. Where should we draw the line? #Hannity — Sean Hannity (@seanhannity) June 20, 2015

The way Hannity condemns politicization, Fox News viewers must think that every shooting demands a one-month grace period before even the most genteel of political discussions can begin. (The benefit there, of course, is that by the time that theoretical month would have passed, we're onto another senseless killing, another period of "thoughts and prayers.")

Yet, a review of Hannity's past commentary shows that he does not apply his no-politicization rule even-handedly. In fact, Hannity seems to delight in politicizing the death of Americans.

Mother of police officer killed by illegal: “The leniency that the American government is allowing these illegals is costing lives” #Hannity — Sean Hannity (@seanhannity) July 9, 2015

Through his grief-stricken guests, Hannity called for more hardline immigration policies. Later in the fall, he vehemently supported legislation named after Steinle (Kate's Law), and harangued Democrats for not backing the "common-sense legislation."

.@tedcruz on Kate's Law: “The Democrats have gotten so extreme, so rabid, so partisan that they block even common-sense legislation.” — Sean Hannity (@seanhannity) November 5, 2015

This exploitation of a shooting victim's death to marginalize people of color and whip up his red-state audience is no one-off incident for the host. Hannity did it after the San Bernardino massacre as well. Right after the shooting, Hannity suggested that the U.S. should be monitoring mosques and Muslims more closely.

Question of the Day: Should we be spying on mosques that have extremist ties? Weigh in using #Hannity. — Sean Hannity (@seanhannity) December 4, 2015

He again attacked Obama's leadership, questioning whether his policies were too lenient on foreign-sponsored terrorism.

The #SanBernardino shooting was an act of terror. Is Pres. Obama gambling with Americans’ lives? We discuss NOW on #Hannity.

When Democrats cautioned against policies that would punish all Muslims, Hannity and his colleagues chastised them for not being tougher.

Question of the Day: Does the administration need to stop taking in Syrian refugees for a period of time? Weigh in using #Hannity.

Hannity's body of work demonstrates that he is willing, if not eager, to politicize a shooting, so long as the perpetrator is not a white, male, conservative American — basically the average Hannity watcher.

Now, God knows, liberals too can be hypocrites. But in the fallout of the Las Vegas massacre and Charleston, Democrats did not call for the surveillance of old white men like Paddock; they did not seek to round up neo-Nazis like Dylann Roof. All they did was ask for common-sense gun regulation.

In Hannity's political world, that is "beyond shameful" — the inverse of banning refugees from entering the country. That itself is a damn shame.