Wake up, John Kasich: It's not your Republican Party anymore 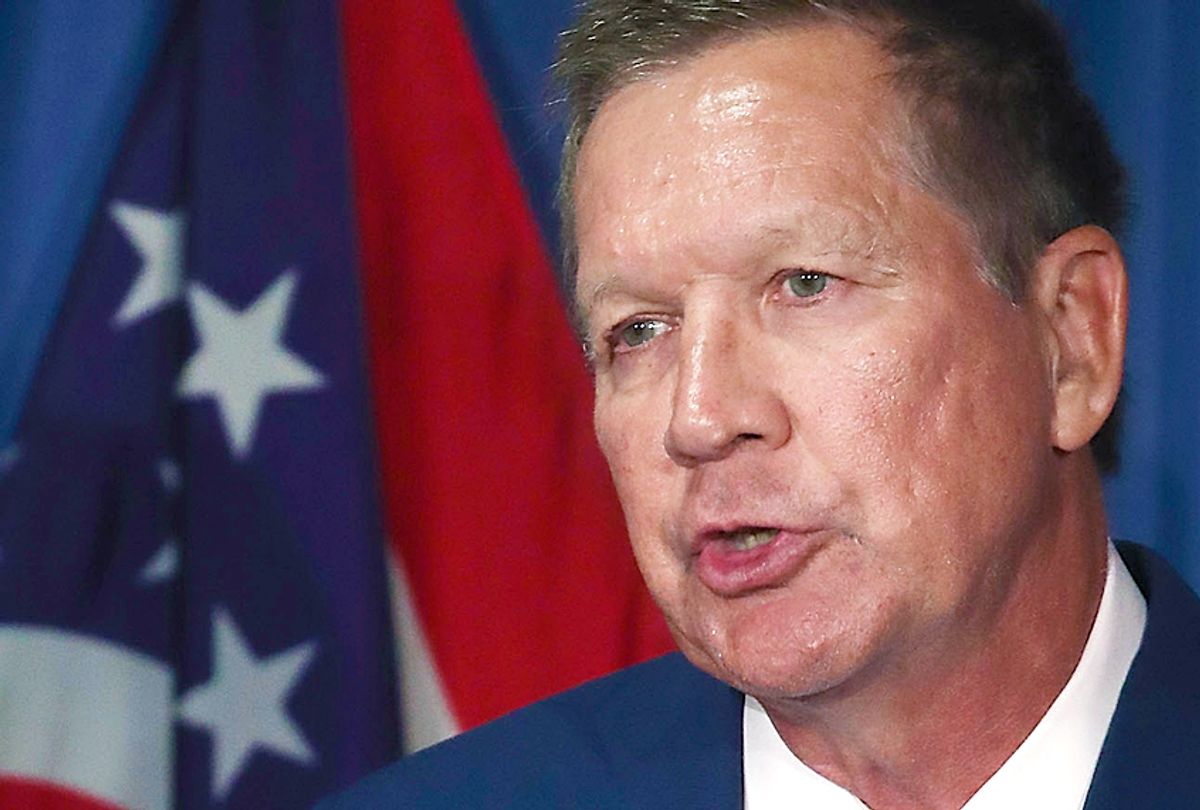 Roy Moore’s victory in Alabama's Senate primary last week has further aggravated tensions within the Republican Party, where there has been a struggle between the so-called populists and the establishment since last year’s election. The success of Moore — a right-wing theocrat who has previously advocated criminalizing abortion and homosexuality — represented an unequivocal victory for the right-wing populists and, like Trump’s nomination in 2016, tested some Republicans' loyalty to their party. On Sunday, for example, Ohio Gov. John Kasich, one of Trump's opponents in the 2016 Republican race, responded to Moore’s nomination by telling CNN’s Jake Tapper that he can no longer support the GOP if it isn’t “fixed.”

“If the party can't be fixed, Jake, then I'm not going to be able to support the party. Period. That's the end of it,” said Kasich, who also refused to support Trump’s candidacy last year, unlike most of his fellow Republicans. “What I'm trying to do is struggle for the soul of the Republican Party the way that I see it,” the governor continued. “And I have a right to define it, but I'm not going to support people who are dividers.”

It is unclear what exactly Kasich means by “fixing” the GOP, but with Moore’s victory last week it's clear that the Ohio governor and other Republicans like him are losing the struggle for the soul of the party. The Trumpers continue their conquest of the GOP, and even though President Trump endorsed Moore’s opponent, appointed incumbent Sen. Luther Strange, the former judge was a thoroughly Trumpian candidate who was backed by the president’s erstwhile chief strategist, Steve Bannon (who is now back to running Breitbart News). So Moore can fairly be seen as a continuation of the Trump revolution (or, rather, counterrevolution), and the latest manifestation of the far right’s Republican takeover.

Though Kasich seems unwilling to give up on his party just yet, today’s GOP is more the party of Roy Moore (and Donald Trump) than the party of John Kasich (and John McCain). That is to say, the party is more reactionary than it is conservative. This distinction is helpful when trying to make sense of the current intra-party divide, which is often described as “populists” taking on the ”establishment,” but better characterized as reactionaries versus conservatives.

It is worth pointing out that Kasich and other Republicans who are often portrayed by the media as “moderate” are really no such thing. Kasich is a staunch conservative, yet he comes across as reasonable and moderate when compared to someone like Moore, whose theocratic worldview is as disturbing as it is dangerous. Kasich is hardly moderate on issues like abortion and gay rights, but he has never called for criminalizing homosexuality or declared that Islam is a “false religion.” Nor has he rejected the separation of church and state and argued that “the Judeo-Christian God reigned over both the church and the state in this country, and that both owed allegiance to that God,” as Moore did in 2002.

Kasich appears moderate because his party has moved so far to the right over the past few decades, just as Sen. Bernie Sanders appeared “radical” during last year’s election because the Democratic Party had shifted to the center. The Ohio governor has a conservative temperament that makes him averse to the extreme politics that has come to dominate his party. He often speaks out against so-called “dividers,” and rejects the divisive rhetoric of Trump and other right-wing populists.

Moore, on the other hand, is a demagogue whose reactionary worldview leads to extreme tactics and a form of politics that is decidedly non-conservative.

“Reactionaries are not conservatives,” the political scientist Mark Lilla explains in his 2016 book, “The Shipwrecked Mind: On Political Reaction.” “They are, in their way, just as radical as revolutionaries and just as firmly in the grip of historical imaginings. … [The reactionary’s] story begins with a happy, well-ordered state where people who know their place live in harmony and submit to tradition and their God. Then alien ideas promoted by intellectuals — writers, journalists, professors — challenge this harmony and the will to maintain order weakens at the top.”

“The reactionary mind is a shipwrecked mind,” writes Lilla. “Where others see the river of time flowing as it always has, the reactionary sees the debris of paradise drifting past his eyes. He is time’s exile.”

Reactionaries like Trump and Moore want to restore society to some golden age of the past, whether that means bringing back obsolete manufacturing jobs, deporting (and banning) immigrants and making America white again, eliminating women’s reproductive rights, or reviving the old sentiment that “Christianity ought to be favored by the State.” The Republican Party is a reactionary party, and last year’s election confirmed this fact. There is no “fixing” the Party of Trump. It's about time that John Kasich recognized that what used to be his party is now Roy Moore’s.