The 10 most overrated Halloween films

From "Nightmare on Elm Street" to "Nosferatu," these are the scary movies that are beloved — but are overrated 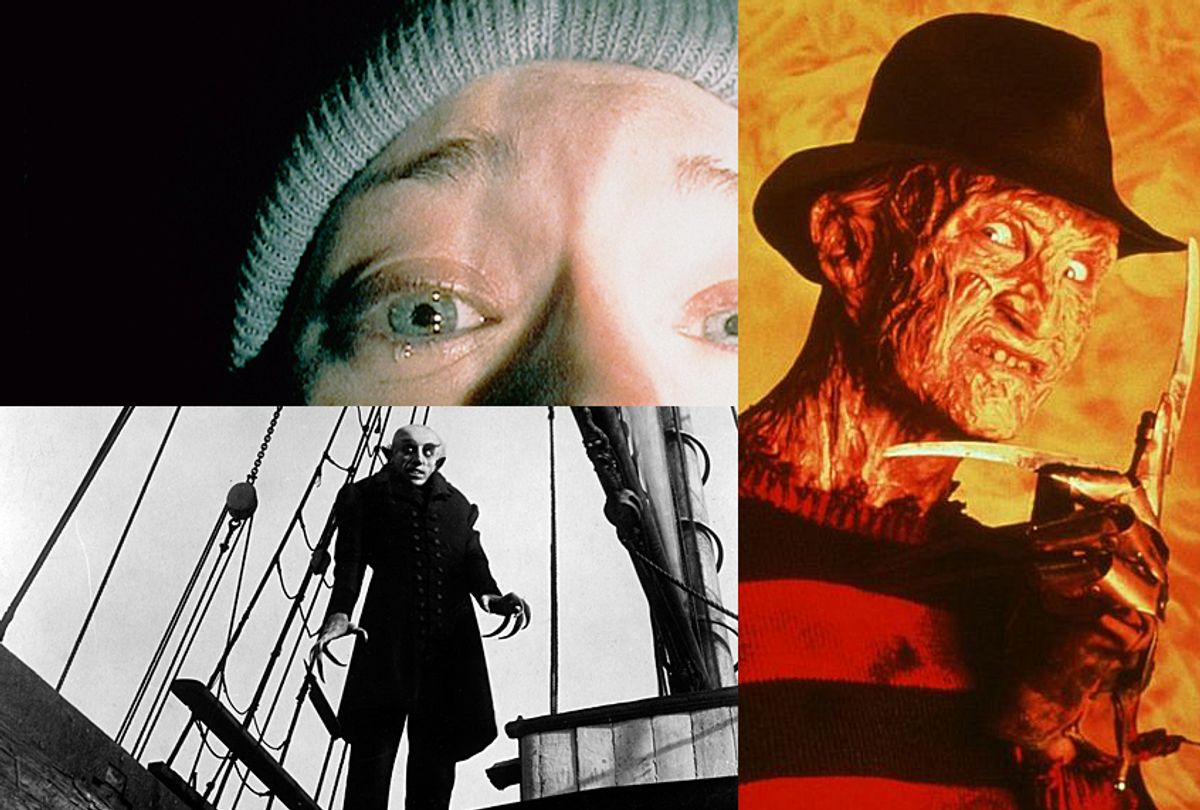 Just to be clear: This list is not going to use Rotten Tomatoes as the sole metric to determine whether a given movie is overrated. After all, if you're a horror fan, you're used to being blown away by a movie — only to see that it was lambasted by the critics compiled at the great aggregator. Or, as this article attempts to demonstrate, vice versa.

With that out of the way, here are the 10 horror movies that I consider to be overrated. Feel free to disagree in the comments section below!

Good, but not as good as a lot of people seem to think.

We can start with three so-called classics that prove the wisdom in Mark Twain's observation that a classic is "something that everybody wants to have read and nobody wants to read." Only in this case, nobody should really want to see them.

1. "Nosferatu" (1922): Sure, this was a key work of German Expressionism, but have you actually tried watching it? This might be the least interesting version of the Dracula story ever put onscreen — and, indeed, because the filmmakers weren't authorized to tell the Dracula story, they changed the title to "Nosferatu" and the villain to Count Orlok. While the makeup for Count Orlok (played by Max Schreck) is impressive, the movie itself doesn't hold up today in terms of atmosphere, story or — most important — scares.

2. "The Wicker Man" (1973): This is a tough film to judge, and not because of its intrinsic merits. Thanks to Nicolas Cage's infamously hammy performance in the 2006 remake, the original has been almost forgotten, but frankly it wasn't that good in the first place. Its attempt at social commentary by comparing Christianity to paganism falls flat, the creepy cultlike town trope had been done to death even by the early 1970s, and the twist ending is given away by the title. I mean, the titular wicker man doesn't even appear until the final scene of the movie, and it is put to exactly the use that one would expect when going into the theater. That makes the unfolding story a bit like watching a dumb lamb be guided toward a slaughterhouse, which is not exactly what you should want in a suspenseful horror flick.

3. "The Amityville Horror" (1979): Another so-called classic in which nothing of interest happens. I'm not going to waste time explaining how the supposedly "true" story on which it is based is a hoax, but the reality is that they still could have made a good horror movie from shoddy source material. The problem is that "The Amityville Horror" is a by-the-numbers haunted house flick in which the scariest scene involves a priest being mildly annoyed by flies. Why should I be scared again?

The next two movies are widely regarded as the best in their franchises, although heaven (hell?) knows why.

4. "A Nightmare on Elm Street" (1984): My favorite horror franchise is "A Nightmare on Elm Street," but it is the sequels I love, all of which are much better than the original. It isn't that the first movie is bad, not at all, but it seems more like an introduction to the premise of a dream demon than a really gripping story in its own right. Aside from the scene of Johnny Depp being devoured by his bed and transformed into a geyser of blood, there isn't much here that stands out in the memory, and Krueger himself has yet to reach his full horrific potential compared with his later incarnations. Again, not a bad movie by any stretch, but it feels more like a pilot episode to a stellar TV series than a great stand-alone feature.

5. "Final Destination 5" (2011): Ironically enough, I think the "Final Destination" movies are vastly underrated. How many other horror franchises manage to create a slasher-killer feel without the slasher killer, or have characters engage in existential dialogue in which they thoughtfully weigh the meaning of their own lives? Each movie is a testament to deterministic nihilism — but, to the franchise's discredit, each one is also basically a carbon copy of its predecessors and successors. Yet "Final Destination 5" is the only one that was certified fresh on RottenTomatoes, which frankly baffles me. They're all basically the same movie, so why is this one given special treatment?

Terrible no matter what anyone says.

Three of the five movies on this list have two very big things in common: They're shaky cam-filled nausea fests that made a lot of money due to clever marketing gimmicks. Even worse, they all were certified fresh on Rotten Tomatoes, thereby proving that critics are not immune to being swept up by hype.

7. "Cloverfield" (2008): This may have been the most nausea-inducing of the movies included here. Because it was made by J. J. Abrams, fresh from his newfound fame as the creator of "Lost," people assumed that it would contain a clever and intricate plot with sensational special effects. Instead we got a Godzilla knockoff with monsters so unconvincing that the camera was probably wise to keep you looking away from them.

8. "Paranormal Activity" (2009): Part of the reason I hate this movie is that it seemed to do well by causing "Saw VI"  to underperform (a movie that I strongly believe is underrated), but I could forgive that if "Paranormal Activity" was any good. It isn't, though; this bland mediocrity managed to pull in a decent box office performance by creating a campaign in which audiences had to "demand" that the film play in their theaters. Clever, yes, though no more so than "The Blair Witch Project" pretending to be a documentary. And it's no better than that movie.

The other two movies also share a common trait — namely, that their appeal is derived entirely from the shock of seeing its twist ending for the first time. Once you've done that, their effect pretty much completely wears off.

9. "Rosemary's Baby" (1968): I'm not even sure it's accurate to call this a twist ending. Any moviegoer even passingly familiar with plot formulas can call this one out from a mile away. After all, it tells the story of a woman who has a horrifying vision of being raped by a monster and then wakes up to find out that she's pregnant. Everyone around her insists that her husband is the father and she has nothing to worry about, but did anyone in the audience actually think that would happen? What kind of movie would it have been if it actually did culminate in it being a normal and unremarkable pregnancy? If the twist that the devil was the father had come halfway through the movie instead of at the very end, it might have worked better, but on its own it builds to a climax that amounts to nothing.

10. "The Sixth Sense" (1999): My friend Brian accurately described this as a movie that you see exactly twice: Once to be surprised at the twist ending (which is deftly executed), and a second time to appreciate the craftsmanship that went into simultaneously concealing that twist and dropping hints in the story that build up to it. If you watch "The Sixth Sense" a third time, however, you will notice that it's actually pretty dull, despite the solid performances from the entire cast.