Thoughts, prayers, and the five stages of media tragedy distillation

Running down the five stages of tragedy, as handled by the media 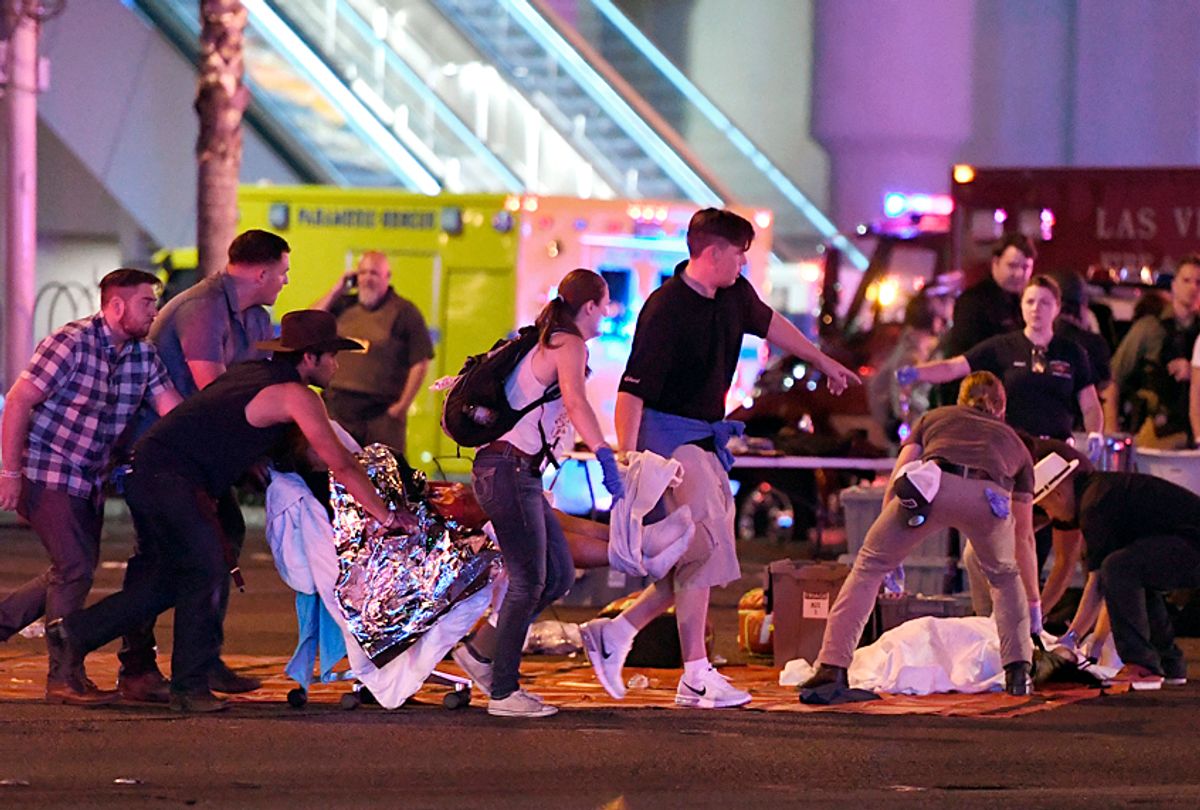 An injured person is tended to after a mass shooting at a country music festival on October 2, 2017 (Getty/Ethan Miller)
--

Americans, as a culture, crave convenience. Clarity. The simple explanation. Last week's horrendous shooting in Las Vegas denied us all of these palliatives even though explanation would seem to be so very simple, a matter of if and then. If someone has used a series of legally obtained weapons to create mass carnage on innocents in the middle of a major city, then surely that is the topmost of our problems. The why of it won't bring back the 59 people Stephen Paddock gunned down from 400 yards away.

But it's what television spins out over. News channels numb viewers with their obsessing over the why factor until we simply don't want to hear about it anymore. Late-night hosts do their best to make sense of it all and call out the hypocrisy of gun lobbyists masquerading as television journalists. The pundits respond in kind, with ugliness. Television writers take a crack at making a statement with a notable episode . . . that may never see the light of day.

We're stuck in a ceaseless rotation through the cycles of media tragedy distillation, one that parallels Elizabeth Kubler-Ross's classic model of the five stages of grief. It began long before last week, chasing the tail of the previous worst mass shooting in modern American history at the Pulse nightclub in Orlando. Of course, that cycle was connected to the San Bernardino shooting in 2015, and the Charleston Church shooting before that, and Sandy Hook, and all the others that occurred before and between those. A series of interlocking circles so close together that if they were to be made solid, we'd have a bolt of chain mail, which would be something. We need to grasp something.

Here's how the latest cycle has manifested.

Mass shootings occur so frequently in this country that we never really leave this stage, a dark fact Netflix's "BoJack Horseman" picks apart in the season 4 episode "Thoughts and Prayers." The current season dropped on Sept. 8, weeks before Paddock checked into the Mandalay Bay Resort & Casino with several suitcases packed with munitions.

But its title is merely an echo of the empty response leaders and fearmongering talking heads hiccup forth following a substantive massacre. In the episode the phrase becomes a bleak refrain routinely and carelessly uttered in proximity to displays of self-serving heartlessness.

The main storyline revolves around the news of a mass shooting in a mall — not the shooting itself, but how it will impact the release of movie producer Lenny Turtletaub's new film "Ms. Taken," starring emerging actress Courtney Portnoy, who plays the niece of Liam Neeson's hero in the "Taken" franchise. Courtney spends the majority of the movie gunning down baddies in an assortment of settings including, yes, a mall.

Turtletaub's brain trust convenes to figure out what to do, and each suggestion is more soulless than the previous. Their solution is to edit the scene, but the frequency of mass shootings in the United States means that the run time for "Ms. Taken" shrinks by the moment.

"You always hear about mass shootings affecting other peoples' movie openings," Courtney sadly whines, "But you never think they're going to affect your movie opening." She quickly qualifies this — how else? — by declaring that her thoughts and prayers go out to the victims and their families.

Before the fourth season of "BoJack" came the "Shoot-Up-Able" episode of "The Carmichael Show," a bizarre and lightly comedic take on mass shootings (I know!) that includes laughter from the studio audience. NBC originally pulled that episode in light of a mass shooting that made headlines in proximity to that show's third season, but aired it weeks later.

Its postponement wouldn't have made much of a difference, as many critics pointed out then and since, because as the episode itself highlights, multiple shootings have become so commonplace that when it hits home, the main character plausibly appears to shrug it off.

Except . . . let's just say the episode takes a turn. (When you're able to stomach it, worth the price of downloading it from Amazon.)

In Kubler-Ross's model, these are separate stages. But the nature of the Paddock case created an intertwining of the concepts in the call and response between late-night hosts and, who else, Fox News.

Scores of crimson rage flares kept the lights on Fox News last week, as its news desk occupants contorted mightily to reframe its competitors' coverage of lax gun regulations as "unpatriotic" and anti-conservative.

Then the late-night hosts kicked in. Stephen Colbert took the solemn, polished approach and called upon lawmakers to do something other than nothing. Jimmy Kimmel now famously, tearfully summed it up in his Monday night monologue as "the kind of thing that makes you want to throw up or give up; it's too much to even process."

And he's right. Later on, Kimmel called his audience to action: "Tell your congresspeople to do something," he says. "It's not enough to send your love and prayers."

How does Fox's Greg Gutfeld response to these orations on Tuesday? "People claim gun control talk is being silenced. This is silence? . . .  So what do they have in mind, specifically, besides do something, do anything?"

He goes on to add, "My theory is if you focus on a weapon [it] allows you to spread some blame onto people that you already dislike: gun owners, Republicans, Trump voters. Sometimes it feels like a class thing."

Elsewhere, at New York Comic Con, another version of bargaining was in evidence as Netflix withdrew its panel for "The Punisher." The streaming service has been curiously coy about its release date, keep it a mystery as part of its marketing. So we will never know, once it's released, if it was indeed pushed back.

Yanking episodes or delaying movie releases in the wake of a shooting "out of respect for the victims and their families" is a classic mode of bargaining. The shows air at a later date anyway — after the memorials and special news reports have abated. After we've all but forgotten how much these events hurt. "The Punisher," in case you didn't know, is a heroic vigilante who is an expert marksman. A good guy with lots and lots of guns.

A few days into the coverage, the thrust of conversations turned to hotel security and how, by necessity, lodging management would have to start checking bags to ensure the safety of guests.

This is the tail of the snake, always slightly out of reach of the head, whose name is Denial. We haven't gotten there yet with Las Vegas because we're stuck on figuring out why. Don't worry, we'll be there soon enough. To the media, the government, the lobbyists, the viewers, this is all old hat. Television is ensuring that everybody does exactly what we're supposed to do until we get back to acceptance yet again.

Some of us are there already. Jim Jefferies was actually there in 2015, not long after a stand-up routine he did on gun control went viral and earned him a number of death threats from gun enthusiasts. That's why his opener on Tuesday night's episode was as bleak and horrifically honest as they come.

"Now, it is a privilege for me to have my own show and have my opinions heard on this platform every week, and I'm sure many of you are tuning in to hear what I have to say on this tragedy. I've been very open about my opinions on gun control and the Second Amendment in this country," Jefferies said.

"But I'm going to tell you now, I have nothing more to say. I've said everything I can. We know what needs to be done to try to prevent this from happening again. But we didn't change the laws after Sandy Hook, we didn't change the laws after the Pulse nightclub, and we're not going to change them now. We're doing nothing. So tweet #PrayForVegas, change the filters on your profile picture. Post pictures of broken hearts on your Instagram. But know that you are doing nothing but pissing into the wind.

"America, you have let this happen. This is our reality now. I dare you to prove me wrong."

He pauses for a moment, then adds somewhat more glibly, "I'll be back with some comedy about Puerto Rico after this jingle."

Back to denial? Not until the next tragedy puts this one on the back burner. But between the newsmagazine episodes, the inevitable movies of the week and the scattered anniversary revisits, news and primetime will get us there soon enough.