Trauma is the American experience

Being black in certain parts of America trains you to deal with murder. Lately, the whole country has been learning 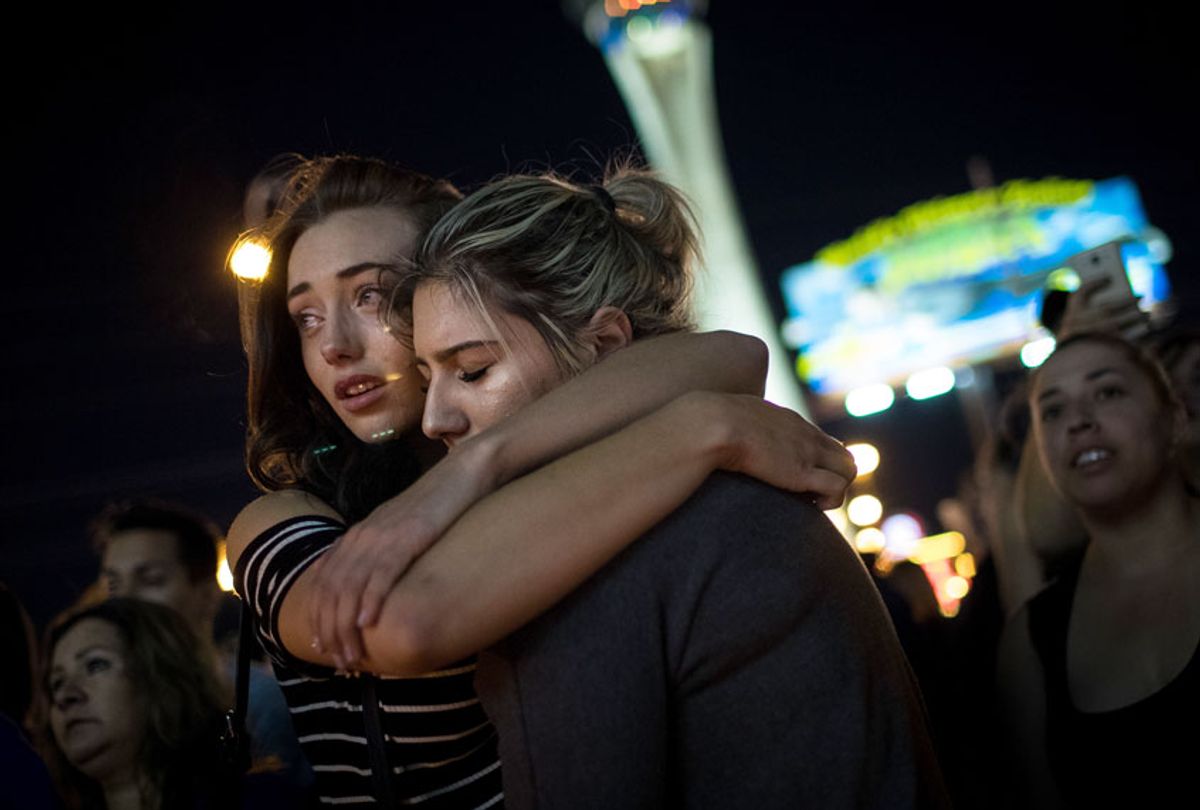 What happened with Kenneka Jenkins, the young black woman from Chicago who mysteriously died in a hotel freezer? How are they surviving in Puerto Rico in the aftermath of Hurricane Maria, after President Trump mocked their pain and jump-shot rolls of paper towels at them during his visit? How long will Las Vegas continue to grieve in the wake of Sunday's mass shooting, after the national coverage fades away?

It’s like tragedy is the number one restaurant in America right now, and trauma is its top-selling dessert.

This week I learned more about the Las Vegas killer Stephen Paddock than I should ever know. I can tell you about his hobbies, job history, net worth; I can repeat insights from what his neighbors thought of him and define his relationship status. We’ve seen all of this before.

Next week will be about the victims and their families, and sadly, the hopes and dreams they won’t get to fulfill. This incident, like all of the similar incidents before it, truly breaks my heart. And it will happen again.

If Congress did nothing about gun control after Newtown, chances are that the people of Las Vegas mean nothing to them. I honestly thought we’d get tougher gun laws after so many white people started dying at the hands of a domestic terrorists, but apparently Americans love the Second Amendment more than their own safety. The NRA bought the Republicans who control the White House and Congress now, so there’s that. I wouldn't be surprised to see a conservative politician lose a family member in a mass shooting and still praise automatic weapons in return for votes. This enables trauma to be a permanent part of the American experience now.

I do wonder how white people who aren’t used to gun violence are dealing with the collective trauma that results from mass shootings. The first thing that comes to mind for me was the response to September 11, 2001. That was the first time I witnessed white people reacting to trauma, and I recognized the similarities and noted the differences between our communities.

I jumped up early on 9-11 and blasted out of my front door, shirt pulled halfway over my head, and fell into the passenger seat of my homeboy Threm’s car. We were headed to the record store to buy Jay-Z’s new album.

“They saying that 'The Blue Print' is the going to be the best Hov album ever,” he said, yelling over the volume of the stereo. “I might not listen to anything else for the rest of the year!”

I nodded in agreement. “Fab drop today, too! I’m buying both!”

We hit the store, grabbed our copies and rode back to our neighborhood. My phone started ringing off the hook. It was like a pocket call center: my dad, my sister, my dad again, my girlfriend at the time, and again and again — so much that I shut it off. The ringing phone spoiling our listening party. Threm wasn’t lying — this was Jay-Z’s best work to date. Halfway through the album, I cut my phone back on and it began to ring again.

This time, I answered.

“Oh my god, are you good?” my sister yelled. “America is under attack!”

I told her I was fine. Threm looked healthy and everybody in the room seemed normal. I took her advice and went home to watch the news. The impact of the two airplanes hitting the World Trade Center was devastating — anyone could see America would never be the same.

As the story developed and everyone became aware of what was happening, it seemed as if our country had frozen. And once it thawed, the United States transformed into a place that was drunk on unity, patriotism and togetherness. Everyone stopped focusing on their personal problems, issues and setbacks to turn their attention to this new American tragedy created by what the media was calling evil Islamic extremists. There was no longer room for biased opinions or cultural differences. America combined as one by forming a hate for Afghanistan and Al Qaeda, and it started spilling over to people wearing burkas or turbans and even to those who dared to be Muslim. That is, everywhere except in my neck of the woods.

Nothing changed in my section of East Baltimore. If I hadn't taken that call from my sister, I probably wouldn’t even have known until weeks later. Images on TV of mourning white people didn’t really match what I was seeing on the ground. No one around me united, dabbled in conspiracy theories or even mentioned the thousands of innocent lives that were lost in New York and Washington. I remember asking Black Kenny, a dude from a block over, what he thought about the attacks and he shouted, “Niggas die everyday 'round here, boy! Osama ain't the real terrorist!”

Being black in certain parts of America trains you to deal with murder. It is not that we are immoral or crazy; some of us simply deal with violent tragedy on a daily basis.

I saw my first murder when I five years old. I was posted up on my grandparents' front steps with a freeze pop when a small man I’d never seen placed the barrel of a shiny gun to our neighbor Big Stacks' temple. Screams spilled out as the man pulled the trigger and blew off Big Stacks' face. Pieces of flesh and blood splattered our clothes, then blanketed the front steps. My uncle Lo said he should have ducked. And just like that, the body was moved, the mess was cleaned, and we went to school. Business as usual.

That would not be the last time I witnessed murder. Dreadful events like that happen in cities like Baltimore and Chicago every day. Systemic oppression forces us to deal with the reality of American terror constantly. By systemic oppression, I mean the lack of economic opportunity. I mean dealing with predatory banks that offer high-interest loans to minorities who have outstanding credit. I mean being policed by officers who beat black teens senseless for pleasure. Then there are the fake activists, the fake reverends, the lying government officials who control our deplorable, disgustingly under-funded public schools and the companies who don’t hire people with black names. These are the terrorists Black Kenny spoke of — the terrorists black Americans have become accustomed to dealing with. This is why the reactions in my neighborhood to 9/11 weren't nearly as drastic as those of the white people I knew, or the ones we saw crying on television.

So we have something in common now. Our shared trauma makes our divided country seem, in a way, not so divided. This could be an opportunity for us to come together and demand something new.

The Trump election has exposed the biggest racial divide in my lifetime. His supporters have to see that he doesn’t really care about them. But we do — or at least, we can learn to. As an African-American, I can empathize with any person suffering loss, because I have dealt with it so many times myself, at multiple levels.

Black people care about people's trauma in a way that the president can’t — after all, for the most part, it's not billionaires who are being killed and maimed at these shootings, and Trump has demonstrated that he can only connect with people who are similar to him. These deaths hurt us all. We have to find a way to move forward together, across racial divides. The first step is acknowledging what we have common and using that as a starting point.