What I learned when I became a bureaucrat

After shadowing at a social services agency, I understand why bureaucrats are seen as heartless 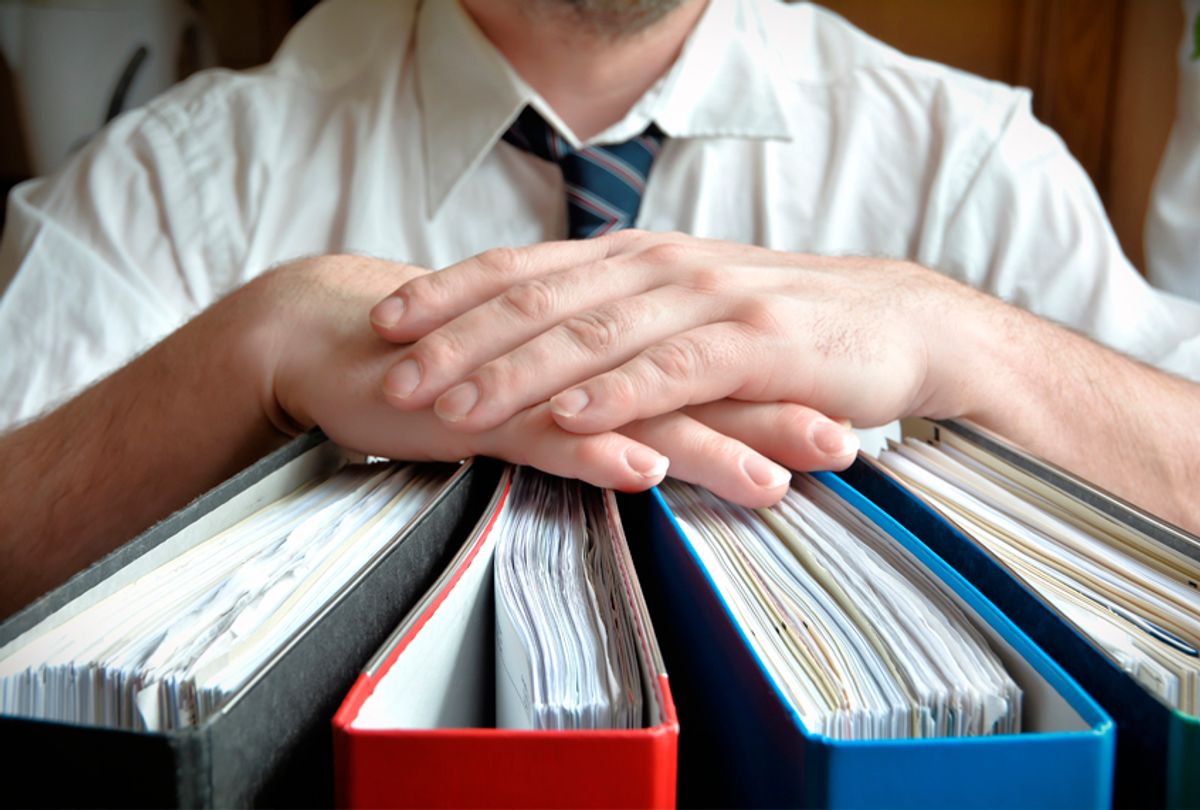 Adapted from “When the State Meets the Street: Public Service and Moral Agency” by Bernardo Zacka, published by the Belknap Press of Harvard University Press, $35. Copyright © 2017 by the President and Fellows of Harvard College. Used by permission. All rights reserved

It is not a compliment to be called a bureaucrat. The word evokes rigidity, narrow-mindedness, insensitivity, coldness, lack of initiative, and, above all, rule-worship. These attributes are so ingrained in our collective imagination that they have become definitional. According to The New Oxford Dictionary of English, a bureaucrat is not just “an official in a government department” but, more specifically, “one perceived as being concerned with procedural correctness at the expense of people’s needs.”

To the extent that bureaucrats have unflattering characteristics, they inherit them, in large part, from the organizations to which they belong. David Foster Wallace takes himself to be speaking for “most ordinary Americans” when he writes of bureaucracies: “I hated and feared them . . . and basically regarded them as large, grinding, impersonal machines—that is, they seemed rigidly literal and rule-bound the same way machines are, and just about as dumb.” He goes on to describe the individuals who work in such bureaucracies, and who acquire, as if by osmosis, the characteristic traits of the organization: “My primary association with the word bureaucracy was an image of someone expressionless behind a counter, not listening to any of my questions or explanations of circumstance or misunderstanding but merely referring to some manual of impersonal regulations as he stamped my form with a number that meant I was in for some further kind of tedious, frustrating hassle or expense.”

­What brings together most critics of bureaucracy, besides the indignation that they voice, is the standpoint from which they write: that of clients. What these critics typically leave out, however, is the other side of the story—the viewpoint of the bureaucrats around whom the drama also unfolds. We know that clients frequently experience bureaucracies as slow, unresponsive, demeaning, and arbitrary—but what do such bureaucracies look like from within, from the standpoint of those who stand behind the expressionless masks and who are so often reduced to lifeless caricatures?

This question takes us into the world of street-level bureaucrats—the social service workers, police officers, counselors, and educators who effectively serve as the face of the state for ordinary citizens. These bureaucrats are caught in a predicament. The proper implementation of public policy depends on their capacity to act as sensible moral agents who can interpret vague directives, strike compromises between competing values, and prioritize the allocation of scarce resources. And yet, they must operate in a working environment that is particularly challenging and that tends, over time, to erode and truncate their moral sensibilities.

In order to explore the factors that lead to this predicament and the remedies that can be offered to it, I conducted ethnographic fieldwork by volunteering as a receptionist at the Norville Community Development Initiative, an antipoverty agency in a large city in the northeastern United States (I have altered the name of the agency and of the city in which it is located, and I use pseudonyms to protect the confidentiality of staff members). As a publicly funded non-profit, the agency assists low-income clients in applying for a wide range of public services, such as food stamps, public housing, fuel assistance, earned income tax credit, and Head Start.

My experience there offers a portrait of bureaucratic life that is much more fluid, flexible, and open to contingency than one might expect. Take the rule-bound, mechanistic simile that Wallace offers—that of bureaucracy as an orderly collection of moving parts that operate in a cold, repetitive, and unthinking fashion—and contrast it with the impression that emerges from the following account, which draws on my first set of field notes.

It was my first day on the job at the agency, and the task I had been given sounded simple. I was to assist the main receptionist, DeShawn, by acting as a greeter of sorts. The instructions DeShawn gave me were brief. “Say ‘Good morning, welcome to the Norville Service Center, do you have an appointment?’ If they do, check with whom; ask them to fill an intake form; and escort them inside, to the other waiting room. Then, walk over to the cubicle area, and inform the case manager that his or her clients have arrived. If they do not have an appointment yet, have them speak to me and I’ll schedule something for them.”

At 9 am, the first clients started walking in. I rehearsed my routine, and everything went well. But the first glitch occurred soon enough: a woman came in with a question I couldn’t answer. I attempted to direct her to DeShawn, but he was on the phone with someone else. Before I could decide what to do, two other clients had entered the office and were trying to make eye contact with me. One of them handed me a letter, and said “John told me to come back with this, it’s urgent; I need to speak to him.” The other asked to use the Center’s photocopying machine—“they always let me do that,” he said, pointing to DeShawn, who was still on the phone. Before I knew it, I found myself pacing back and forth between the reception area, the case managers’ offices, and the photocopying machine.

All this time, new clients kept arriving. Several clients at a time; clients with children who refused to acknowledge the invisible boundary between the reception area and the back-office; clients who spoke so loudly on their cell phones that they had to be asked to lower their voice; clients who wanted to use the fax machine; clients who wanted to use the restrooms—all of them, or so I recall, speaking to me at once. Even my co-workers started turning to me: DeShawn asked me to make photocopies and to answer the phone while he was away from his desk, others wanted me to deliver documents to various offices in the building. Somewhere along the line, as I was moving back and forth between the various clients, the phone, the fax machine, and my co-workers, trying to improvise as best as I could, I noticed that I had dropped my smile.

It was around then, too, that I came to understand the significance of a piece of information the Director of the Center had mentioned earlier that day. This was the start of “fuel assistance” season, one of the busiest times of the year, and the office had, as of that morning, stopped accepting walk-ins because case managers were already operating at full capacity. Most clients were unaware of this change, and came in without appointments, expecting to get their paperwork done. For many of them, I would later find out, this involved taking time off from work. This was the kind of day where one did not want to be a greeter.

One after another, I had to break the news to them: “I’m sorry but we can’t help you today, we’re no longer taking walk-ins. Would you like to schedule an appointment for some other day?” As my words sank in, I could see a mixture of deception and contained anger spread across their faces—torn as they were, I imagined, between the urge to vent their frustration, and the thought that, since I stood between them and the fuel they needed to make it through the cold northeastern winter, it might be better not to risk alienating me. One client—a middle-aged white man, with loose jeans covered in paint marks, an oversized jacket, and a scarred face, dragging two screaming children, one in each hand—could not contain himself. He lashed out at me, at the top of his lungs “ARE YOU SERIOUS? YOU’VE GOTTA BE FUCKIN’ KIDDIN’ ME!” I became acutely aware of the physical proximity at which he was standing, and of the absence of any protective boundary between the two of us. And I thought back to my skinny tie—a relic from two years spent working as a management consultant after college—and to how ridiculous I must have looked.

I felt gripped at the time by three competing impulses. The first was a movement of sympathy. I could understand the client’s frustration. But I did not know how to help. And what about all the others who were able to remain composed? Should their needs be ignored simply because they did not raise their voice? My second impulse was exactly opposed to the first. I felt the need to re-establish my authority, and to regain control over the situation. There were several clients in the room, and I could not let our interactions degenerate into a screaming match. Perhaps I should find a way to put the client back in his place? But I rapidly corrected myself. Surely, I thought, my job was not to discipline people.

So I gave in to the third impulse. I convinced myself that there was nothing personal in the client’s anger, and that I should continue working as if nothing had happened. I stared at him blankly, and said, “I’m sorry, but I’m just doing my job,” and moved on to the next task. I remember being shocked at hearing these words roll from my mouth, barely three hours into the job. I consoled myself by thinking that there really was nothing else I could have done.

But this certainty about my powerlessness, and the psychological relief it provided, vanished in the early afternoon. One of the case managers, Paulina, came to see me in the reception area and informed me that one of her clients had not showed up (“It happens all the time,” she explained). She told me that I should feel free to come see her if someone was here without an appointment, and if I thought they needed to meet with a case manager. Maybe she could take care of them.

“If I thought they needed to meet with a case manager”? With this conditional, I was on my way from being a mere operator to being a gatekeeper endowed with circumscribed but very real discretionary power. And I quickly discovered that I could also disguise the boundaries of my discretion by claiming, as I had done earlier in the day, that I was “just doing my job.”