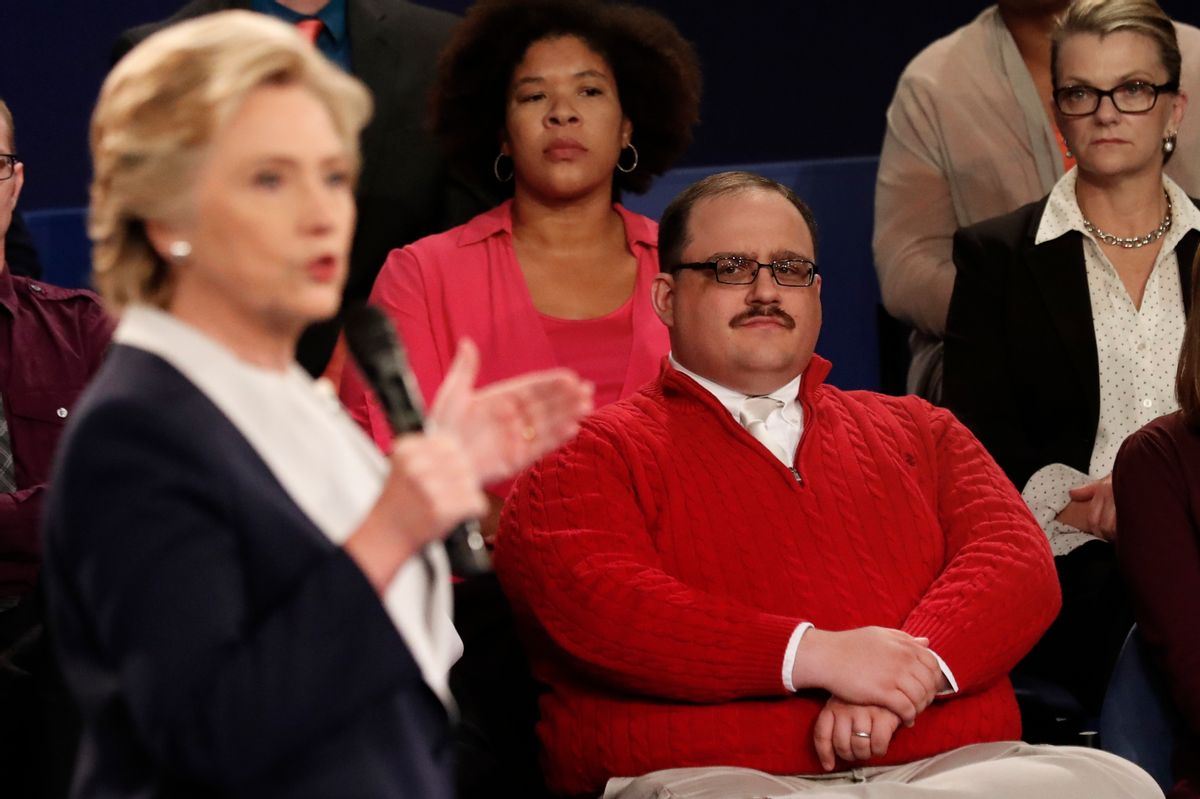 Times were different in 2016. Leonardo DiCaprio finally won an Oscar. The world was distracted by the Olympic Games as opposed to the prospect of nuclear war.  The president of the United States could type a coherent sentence of more than 140 characters. Life was good.

He entered the second presidential debate at Washington University in St. Louis as a regular undecided voter from an Illinois suburb and left as an internet sensation, leaving America awestruck for all of three weeks. So let's celebrate the anniversary of a suburban undecided voter turned internet meme's bizarre rise to fame.

His question to Trump and Clinton — “What steps will your energy policy take to meet our energy needs while at the same time remaining environmentally friendly and minimizing job loss for fossil power plant workers?” — was all but lost in the internet’s barrage of memes.

Some say it was his round face and mustache; others thought it was his red, cable-knit Izod sweater. For whatever reason, Ken Bone set off a social media storm.

“I didn’t have time to think about how weird it was,” Bone told CNN. Upon leaving the debate, Bone found that he had thousands of messages, which eventually led to celebrity appearances on Jimmy Kimmel and Comedy Central’s "@midnight with Chris Hardwick." His sweater was eventually auctioned off for charity to the tune of $10,000 — yes, you read that right — $10,000.

One year later, Bone has finally “decided” where he stands in the country’s politics but remains as confused as the rest of us about his celebrity status.

Though he refused to say who he voted for in 2016, Bone told CNN that “almost anybody who is currently a Democrat in the Senate, I think I would probably vote for over Trump” in the next election.

As far as his fame goes, Bone just doesn’t understand what happened. He’s experienced the negative side: he receives prank calls, had some regrettable past social media posts dug up and even had to have police sweep his home. But the upsides might make up for it; he’s earned approximately $150,000 from celebrity appearances, filmed a commercial for Izod and has fans swarm him for autographs at events, CNN said.

So if you’ve got some debt to pay off, here's what to do. Be an undecided voter in 2020. Wear a red sweater. Ask about energy policy. Become a popular meme. And let America’s celebrity-obsessed, social media-loving population do the rest for you.