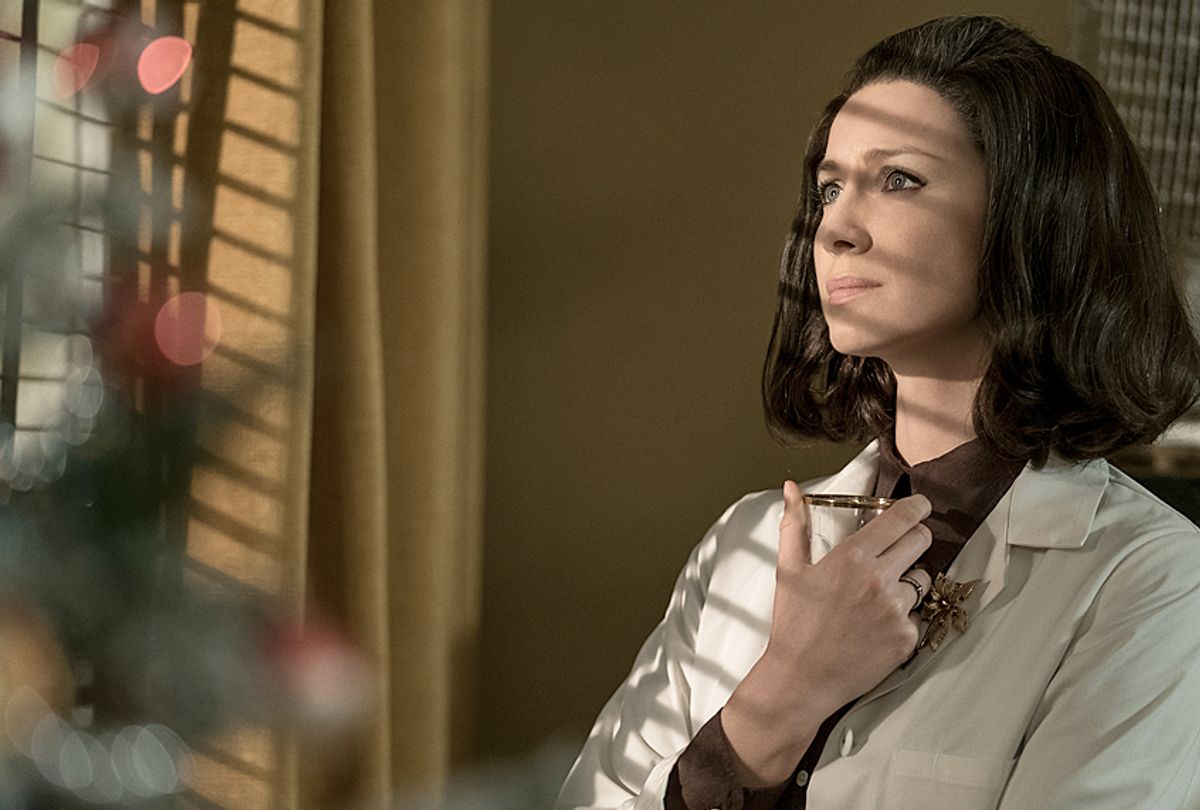 “Freedom & Whisky” and bow ties on loose ends. The fifth “Outlander” episode of its third season closes the 200-year divide between Claire (Caitriona Balfe) and Jamie (Sam Heughan) by way of beloved Scottish poet Robert Burns, whose verses Claire paraphrased to Jamie when last they were together.

The phrase from which the episode’s title is taken appears in Burns’ poem “The Author’s Earnest Cry and Prayer,” dedicated “to the Scotch representatives in the House of Commons” regarding a session held in 1786 concerning Scottish distilleries.

Whisky, a liquor used to soothe the nerves, strengthen resolve and fortify the bonds of friendship plays a major role in this episode largely centered upon Claire and her daughter Brianna (Sophie Skelton) in 1968, a hour a person might appreciation for its poignant portrayal of letting go of certainty, family, and the comfort of loyal friends, to take a chance on the unknown. Then again, those impatient to see Jamie and Claire back together may see it as padding.

Regardless of which side you may come down on, “Freedom & Whisky” poses thoughtful questions about the fallibility of history with regards to widely accepted mythologies perpetuated upon entire cultures, as well as how we interpret individual pasts.

But it also provides a veiled glimpse into the future: In one a scene when Claire goes into office and sees a female’s skeleton laid out on a table that a friend Claire’s surgical partner Joe Abernathy (Wil Johnson)  sent over for evaluation. Joe only tells her that it came from a cave in the Caribbean and, after she handles the skull for a moment Clare blurts out that the bones belong a murder victim. Joe asks how she knows that, and she can’t explain. But he soon finds a split thoracic vertebra that confirms Claire’ supposition. Somebody tried to behead this woman with a dull blade.

What’s more, though the bones were found in a slave burial ground, a marker in her bone structure confirms that she’s actually white.

However, most of the hour tells a version of a story all mothers and daughters endure, as Claire and Brianna relate to each other as women as opposed to merely mother and child, and face the inevitable truth of having each other go.

In the previous episode, the Randall women attempted to track Jamie through history to find out where he was 200 years in the past, surmising that the recently widowed Claire would finally be able to join him. Although they had the help of Reverend Wakefield’s adopted son Roger (Richard Rankin), who is still grieving his recently deceased father, they lost track of Jamie’s whereabouts after his time in Ardsmuir prison.

Unaware that Jamie was forced to go by his middle names to hide his identity from British authorities, a resigned Claire and disillusioned Brianna return to Boston to mourn in different ways. Scotland revealed to Brianna that the father she knew, Frank, was not her biological parent.

Wrestling with the realization that her story of her family is a fiction takes a toll on her. The story picks up in 1968, and early in the episode Brianna hollowly frowns during a history lecture in which the professor discusses the myth of Paul Revere’s midnight ride. He’s not telling her anything about the lie of accounts of the past that she isn’t intimately familiar with. Later he pulls her aside to warn her that she’s failing and could be kicked out of Harvard.

Claire, meanwhile, pushes risk and care with a surgery at work, which Joe finds worrisome. Later they sip whisky and Joe finally pries a portion of the truth out of her about Jamie. She tells Joe she tried to stay with her man but “fate had other ideas.”

The next day Roger surprises Brianna and Claire with a visit from Scotland, claiming to desire the experience of an American Christmas with “lobster rolls and Boston cream pie.” Brianna is happy to see him despite his arrival during a fight with her mother; right before he comes in Brianna tells Claire that she’s withdrawing from Harvard and moving out. She picks up a box of her things, tells Roger she’ll hang out with him the next day, and exits quickly. At this Roger awkwardly attempt to excuse himself to his hotel, but Claire insists he stay with her.

After enjoying dinner together, Roger pours both of them a whisky in the living room and says he has news: He kept looking for Jamie, and found him . . . in an article in 1765 advocating the repeal of restrictions on the import of spirits to the Highlands. It includes lines from Burns’ poem that Claire once quoted to Jamie.

Robert Burns was only six years old in 1765, Roger explained. The poem wouldn’t be written until 21 years later. Only some with knowledge of the future could have quoted it. Then they look at the name of the Edinburgh-based printer: Alexander Malcolm. Jamie’s middle name.

Surprisingly, Claire is upset. She tells Roger she shut the door on the past 20 years ago — another fiction, as we know — but when she found out Jamie survived Culloden, she began to hope only to have her optimism dashed.

But Roger assures Claire this is real, that she can go to Jamie — shifting the conflict from her loss of feelings for Frank, who is now dead, to the reality that she must now to choose to leave Brianna. Later, after Roger has retired, Claire looks out her bedroom window while holding Jamie’s pearl necklace.

Toni Graphia wrote the episode previous to “Freedom & Whisky” in addition to this, and she not only examines the frayed but fervent and profound love that is singular to mothers and daughters but addresses the vanity and selfishness of love. In Claire’s example, the former is less malignant than the latter, as she considers whether 20 years has dulled her looks to the point that Jamie wouldn’t find her attractive.

Considering the “Outlanders” makeup artists leave Balfe’s face more or less untouched, choosing to show how she’s aged with a few barely noticeable wisps of gray in her black bobbed mane, this passage seems a tad silly. Perhaps not as silly as the fact that Jamie, a man who has endured prison and spent years living in a cave in the 18th century — long before the advent of the male grooming and anti-aging industries — still looks as vibrant as he did when he and Claire first tumbled in the heather.

Be that as it may, Graphia writes through these details in a way that even the most confident woman can relate to her fears. Additionally the narrative makes Claire answer for refusing to divorce Frank when she crosses paths again with his lover Sandy Travers (Sarah Macrae) at a reception for fellowship Harvard establishes in Frank’s honor.

Sandy attempts to avoid Claire but is pulled into a conversation with her by the department’s dean. When the latter excuses himself Sandy confronts Claire with brutal honesty at last. “You should have let him go. All those years. You never wanted him. But you wouldn’t give him up.” Sandy says, later adding, “You threw away 20 years with him. I would give anything to have just one more day.”

Brianna notices at least part of this and figures out Sandy’s relationship to her dad. She then guesses, incorrectly, that Claire and Frank must have resented her. But Claire lovingly reassures Brianna that Frank always loved Brianna even if his feelings for Claire wavered. Then she tells Brianna that Roger has found Jamie, and Brianna lovingly gives Claire permission to go.

From this point “Freedom & Whisky” leans into the sentiment of Christmas and farewells: At the hospital later on she watches a televised transmission from Apollo 8's trip to the moon with Joe and their colleagues. “How do you take a trip like that and come back to life as you know it?” Joe asks and, naturally, Claire sees the parallels between the journey of those astronauts and her own.

Claire and Brianna then run down the ramifications of Claire returning through time to Jamie, and specifically it means that she may make it back for milestones such as Brianna’s wedding and the birth of her children. But Brianna understands. In the meantime Claire sews a period-appropriate outfit out of material for modern raincoats – sensible, given the climate – and, taking inspiration from Batman, sews a few hidden pockets to smuggle a few items from the modern world, including scalpels and penicillin.

Later Roger and Brianna give Claire her Christmas gifts, including Scottish coins from the 18th century procured from an antique dealer and an equally useful book, “A Secret History of Scotland the Nation.” Brianna also gives Claire a topaz gem to use to pass through the stones.

Claire leaves a resignation letter from the hospital with Brianna, as well as the deed to the house and ownership of all of the bank accounts. This sorrowful goodbye is capped by Claire giving Brianna the Scottish pearls Jamie gave to her on their wedding night, telling Brianna to wear them on her wedding day.

Roger, who had excused himself from the conversation, returns with three glasses and a bottle of whisky — “a wee nip for the road.” Brianna leads the toast with, what else: “To freedom and whisky.”

She and Roger stay behind to share the American Christmas dinner he wanted, and to snuggle in front of the fire, as Claire takes a taxi to the airport.

As the car pulls up to the airport, Claire ruminates on puddles — how, when she was small, she feared that if she stepped in one she would drop into some fathomless space. “Even now, when I see a puddle in my path, my mind half halts, though my feet do not, and I hurry on with only the echo of the thought left behind,” she narrates.

The scene cuts from her staring at a puddle by her 1968 taxi to a shot of one of her boots splashing into one . . . on the cobblestones of Edinburgh, as she steps out of a carriage in 1768. She soon finds her way to Alexander Malcolm’s print shop and pauses with an excited grin at its threshold. With trepidation she climbs the stairs, pauses to collect herself, and steps inside.

The lobby is empty, but she hears a familiar voice calling out, "Is that you, Geordie?”

Claire steps to the back and says, with bright nervousness, “It isn’t Geordie. It’s me. Claire.”

Jamie slowly turns around, looks up to meet the gaze of the woman he thought to be lost forever, and passes out.  The reunion celebration — accompanied, no doubt, by Scottish spirits — will have to wait for a week or two.