"All our jokes should have a purpose.”: Robin Thede lends late night new perspective 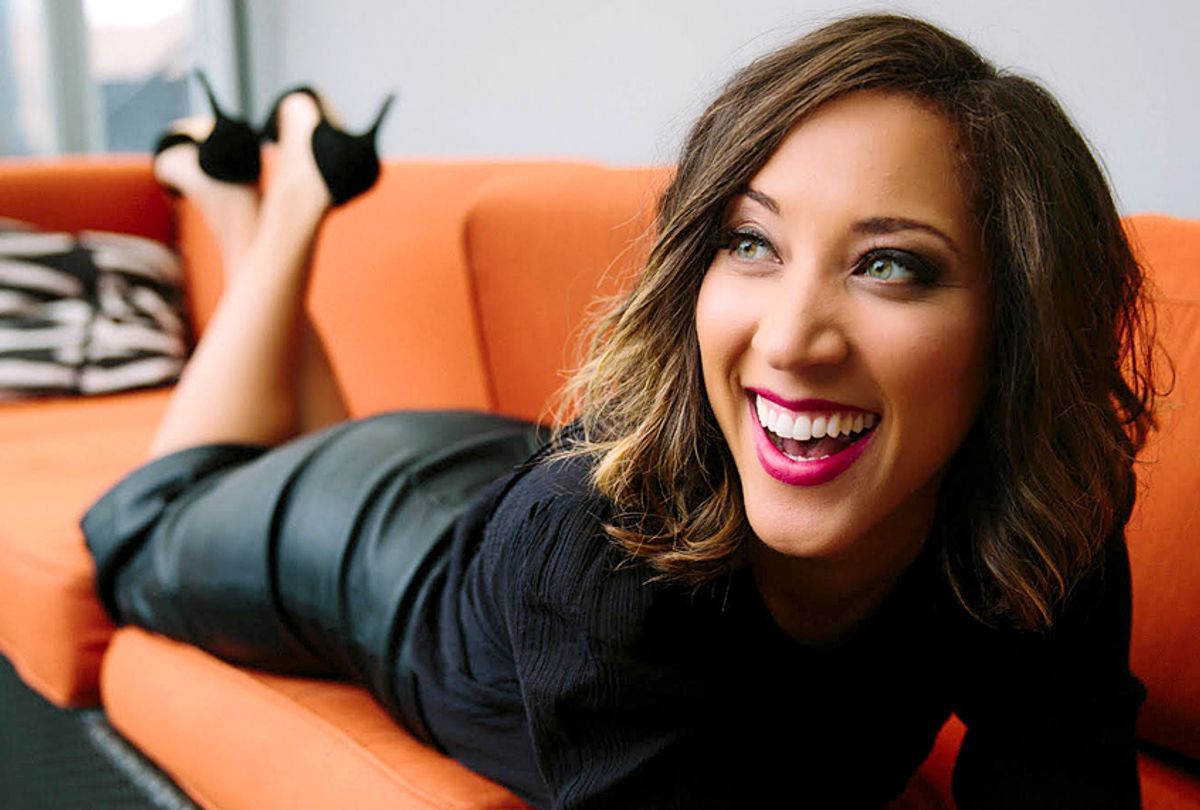 Robin Thede (Courtesy of the Author)
--

On a Monday morning in late September, the staff of “The Rundown with Robin Thede” convened in a sunny, glass-walled conference room high atop a building on West 57th Street in Manhattan, to pitch sketches for a show that would never air. Thede, who has a strong jaw and piercing gray/blue eyes, shoulder length hair and was wearing a casual crewneck sweatshirt, sat at the head of a long conference table.

Prior to getting her own show, Thede was the head writer for “The Nightly Show with Larry Wilmore.” She was the first black woman to hold that role for a late night show, and when “The Rundown” (BET) premieres on October 12, she will be the only black woman late night host on air. (She follows in the footsteps of Whoopi Goldberg, Wanda Sykes and Mo’Nique.)

For the past month, Thede’s staff, the majority of whom are women and people of color, have been building practice shows. After recapping a taped sit-down she did over the weekend with California Congresswoman Maxine Waters, Thede asked her head writer, Wayne Stamps, who was sitting next to her, what they had for her.

This was the Monday after President Trump called football players who protested racial injustice by kneeling for the national anthem “sons of bitches” and in which he disinvited Golden State Warriors star Stephen Curry from visiting the White House. Stamps, who compared the show to “black twitter come to life,” glanced at a whiteboard on which ideas were scribbled in black marker. He told Thede that the favorite idea in the room involved her playing Stephen Curry’s five-year-old daughter, Riley.

The joke’s author elaborated. Thede, as Riley, would be in a press conference answering reporters’ questions about the incident. She could call the president a racial epithet. She could say that she just developed object permanence. Thede loved it. “We have to hit on the hypocrisy of white supremacy,” she said. “And contextualize the protests historically.”

Other than Thede and Stamps, it was hard to tell who held what position within the room. When a premise was presented, the group of writers, researchers, producers and people in the film department resembled a memory of a good college seminar: Jokes bounced off ideas, ideas sprung from jokes. The atmosphere was jovial. From Riley Curry, the conversation turned back to the protests, and from the protests, the conversation turned to NASCAR (which Trump applauded for siding with him).

Thede is from Davenport, Iowa, the daughter of Dave and Phyllis Thede. Her parents named her after Robin Williams. For most of her childhood, the family was poor. Dave was and is a teacher. Phyllis, who currently serves as a Democrat in the Iowa House of Representatives, worked for Headstart as a teacher’s aid, and in the library of Thede’s old middle school. They lived in a trailer park and were on food stamps. “I didn't live in a house with a real door until I was a senior in high school,” Thede said.

The Thedes did have a few basic channels though, and Thede and her father would sometimes stay up late watching stand-up or “Saturday Night Live.” But it was Whoopi Goldberg and “In Living Color,” the ‘90s sketch show from the Wayans brothers, that were most formative. “I remember watching Whoopi Goldberg’s one woman show on VHS or PBS when I was a little kid, and I just remember being so blown away by her. She just did everything, and she does everything. And with 'In Living Color,’ it was eye opening to me to see all those black people on television making me laugh.”

In assembling a staff, Thede was looking for people who had been underestimated in the rest of their careers. She wanted the staff to “resemble the fabric of America and not just be white dudes who went to Harvard.” She added: “I distinctly remember being in all male writer's rooms and being referred to as ‘the girl writer.’ Or they would only let me speak if they had something for the girl character to do. So sure, as a woman or as a person of color, you feel like your opinions aren't as valuable as other people's. I think for me that has always been a motivator. I don't feel like I'm a victim. I just feel like, ‘Oh, okay, I'll just create my own things and make my own way.’”

When, during the NASCAR discussion, someone pitched a sketch where Thede would play a NASCAR driver who can’t get around the track without being pulled over, everyone laughed. But after some enthusiastic riffing on the idea from the room, Thede weighed in. “You guys are going to hate me for saying this. But” — she paused — “it feels like the easy joke. Where we can do things high quality, let’s do it high quality.”

In her gold-accented office after the meeting, Thede explained why she liked one joke and not the other. “Playing Riley Curry will enable me to say some really powerful stuff in a super silly way. But with the NASCAR thing, it's like ‘Oh I get it, another black person got pulled over.’ It feels like an old joke. It feels like the first joke. It’s funny, but I’m not really saying anything. It comes back to a lesson I learned from ‘The Nightly Show,’ which is that all your jokes should have a purpose.”

When “The Nightly Show” was canceled in August of 2016, Thede was devastated. “It came out of nowhere,” she said. “I think we were really about to hit the next level with the election coming.”

But the experience made Thede think that she could host a similar type of show, and it put her in the position to do so. It also informed what she didn’t want to do: “I did not want to do a daily show. It's too hard. It's so much work. When it came to creating my own show, I was like, ‘Oh, yeah, once a week.’ It's why John Oliver and Sam Bee are so good — they get to spend time crafting the message and crafting what they're going to say.”

Later that night, Thede proved to be more selective with her jokes than the most popular late night show in the country. In his “Late Show” monologue, Stephen Colbert made a version of the NASCAR joke that Thede rejected.

Where “The Rundown” will be tighter than the nightly shows, it will be different than other weeklies, like “Full Frontal” and “Last Week Tonight,” in that Thede will focus on politics and pop culture in equal measure, there will be more sketch and Thede will primarily cover issues that are relevant to black audiences.

In one of Thede’s most popular and memorable segments as a correspondent on “The Nightly Show,” she did a Women’s History Month report on “Black Lady Sign Language.” She parsed, for instance, the difference between a black woman doing a “double hand clap” and a “double hand clap on syllables” — the former being your standard congratulatory clap and the latter a furious demand.

The bit stood out to Rory Albanese, who was showrunner of “The Nightly Show” while Thede was head writer, as being funny and beyond the territory of most late night shows but also as being disarming.

“She took something where white guys might’ve been going, ‘Oh what the hell does that mean?’ and it was like, ‘Oh that's awesome, that's what that means!’” Albanese said. “That's the nice thing about Robin's whole approach, is it makes everyone feel welcome.”

In recent years, late night has been transformed as the internet has become the place where young audiences consume late night and Donald Trump’s daily newsmaking. These factors have arguably turned late night into a contest over the best take. The network shows will always have a ratings advantage over the cable shows, but come the next morning, anyone’s segment can go viral.

As the only black woman hosting a late night show, Thede is in a unique position. There are jokes that only she can tell and perspectives on issues that only she can convey. While seemingly every other host has a Donald Trump impression, Thede is the only host ready to roll out a Riley Curry impression. She can spin the camera and point a spotlight on angles and issues that are ignored by the other shows.

Albanese couldn’t think of anyone to compare Thede to comedically. “It's not like people are going to watch her show and go, ‘Oh, this feels like Chris Rock's standup, what the heck?’” — Rock, incidentally, is a producer of “The Rundown” — “or ‘This is like David Spade. She really has her own style and her own vibe, and I think that that's what kind of makes it special.”

But while Thede will have space to differentiate herself from the mostly white, male competition, she also anticipates that being a black woman will be a turnoff to some viewers. “If anything, there's a hill to climb. Because people are like, ‘Well, what is she going to have to say that matters to me?’”

There’s also the issue of audiences confusing a single voice for a singular voice. “I certainly do not represent every black person,” Thede said. She hoped that audiences would not mistake her views for those of an entire race or gender. But she also was quick to recognize the special position she would be in. The conversation turned to tragedies; at this point addressing the nation in the aftermath of a tragedy is part of a late night host’s job. So, when a tragedy occurs —  when, for instance, an unarmed black man is killed by the police — how does she process that?

“For me it's sadness, and then it's mobilization,” Thede said. “And yeah, it's a weird thing to be like, ‘I wish I had a show to talk about this.’ But I know that I am in a place of privilege. Literally every other black woman in the country does not have that option but me. That's crazy now that I think about it.”