Donna Karan defends Weinstein, says women are "asking for it"

"How do we present ourselves as women?" Karan said. "What are we asking?" 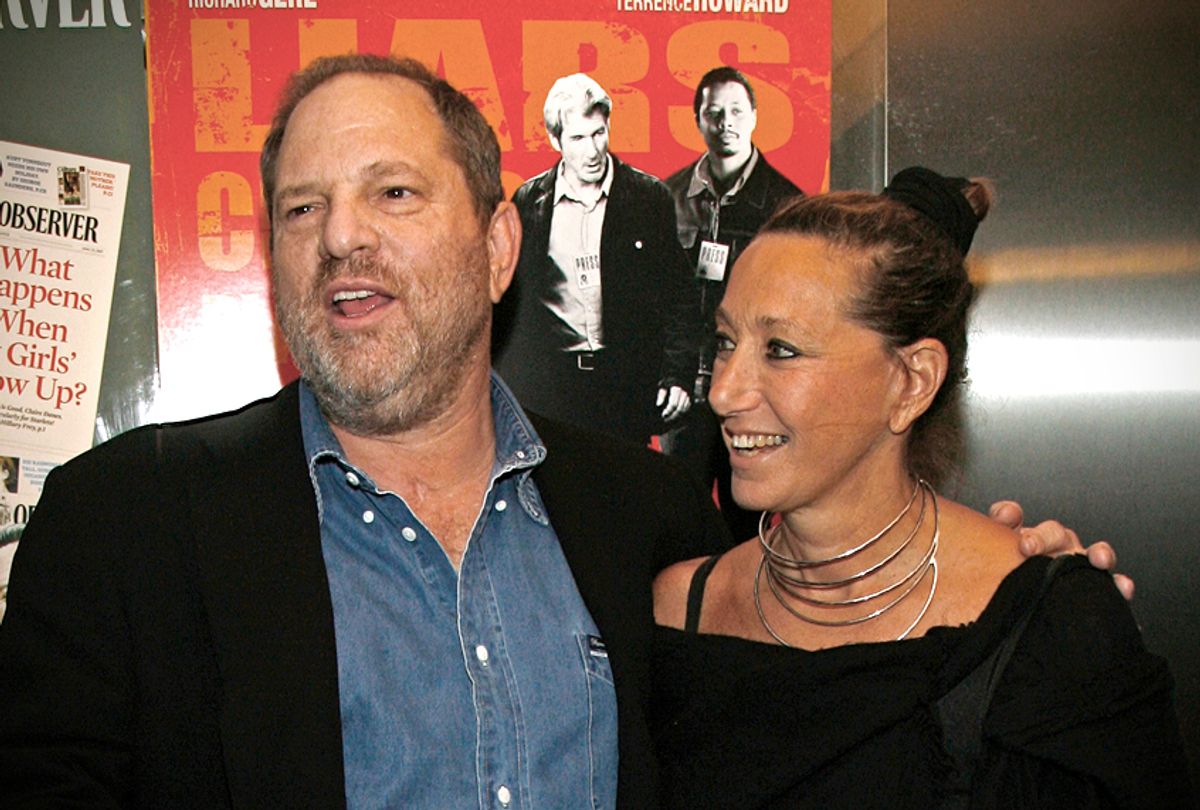 Even as a celebrities line up to take their turns commenting on The New York Times exposé of Harvey Weinstein with lashing denouncements, fashion icon Donna Karan offered up a crude — if familiar — defense of the embattled producer Sunday night.

Speaking to the Daily Mail at the CinéFashion Film Awards, the founder of DKNY and her namesake label said that Weinstein "has done some amazing things" and he and his wife, Marchesa designer Georgina Chapman, were "wonderful people." She is personal friends with the couple.

It did not, alas, end there.

Speaking to a reporter, Karan commented generally about the problems of sexual harassment on a global scale. "I think we have to look at ourselves," she said. "Obviously, the treatment of women all over the world is something that has always had to be identified. Certainly in the country of Haiti where I work, in Africa, in the developing world, it's been a hard time for women." Indeed, it has been.

Choosing not to end on that high note, Karan then took a 50-foot dive into the shallow end of the pool. "To see it here in our own country is very difficult," she said, "but I also think how do we display ourselves? How do we present ourselves as women? What are we asking? Are we asking for it by presenting all the sensuality and all the sexuality?"

She added, "And what are we throwing out to our children today about how to dance and how to perform and what to wear? How much should they show?" Karan continued, "You look at everything all over the world today and how women are dressing and what they are asking by just presenting themselves the way they do. What are they asking for? Trouble."

And yet, the designer did not deny that Weinstein may have committed sexual assault, as alleged. When asked if the producer had been "busted," Karan smiled and said, "I don't think it's only Harvey Weinstein."

She turned the conversation back to less narrow, more global issues again, saying, "I don't think we're only looking at him. I think we're looking at a world much deeper than that." Indeed Weinstein is a symbol, not only for the way Hollywood treats women, but how the world treats women. That said, he's also earned himself a spot on the hot plate in his own right.

"Yes, I think he's being looked at right now as a symbol, not necessarily as him," she said. "I think we have to look at our world and what we want to say and how we want to say it as well."

Quick on the draw, Karan has already released an apology for some comments and claimed that they were — say it all together now — "taken out of context."

A statement to the Daily Mail from Karan reads, "Last night, I was honored at the Cinémoi Fashion Film Awards in Hollywood and while answering a question on the red carpet I made a statement that unfortunately is not representative of how I feel or what I believe. I have spent my life championing women. My life has been dedicated to dressing and addressing the needs of women, empowering them and promoting equal rights." Karan has, yes, been quite active in charities and causes benefiting people in the developing world and women everywhere.

"My statements were taken out of context and do not represent how I feel about the current situation concerning Harvey Weinstein," the statement continued. "I believe that sexual harassment is NOT acceptable and this is an issue that MUST be addressed once and for all regardless of the individual. I am truly sorry to anyone that I offended and everyone that has ever been a victim."

Outside of this isolated incident, there's been almost universal condemnation within the entertainment industry. Stars who have worked with Weinstein, including (but not limited to) Kate Winslet, George Clooney, Meryl Streep and Judi Dench, have lambasted the producer over the Times' allegations. Others, including Lena Dunham, Jennifer Lawrence and Jessica Chastain, have offered their two cents. Other actors and individuals, including Romola Garai, have added to the growing list of allegations against Weinstein. With The New Yorker's own exposé having been published Tuesday morning, the group of accusers and detractors is sure to expand.

Already, Weinstein has been fired by the board of The Weinstein Company, and the firm he founded and which still bears his name is considering rebranding itself entirely. This, despite a series of messages Weinstein sent to other Hollywood executives in an attempt to save his job.