The walls are falling in on the producer 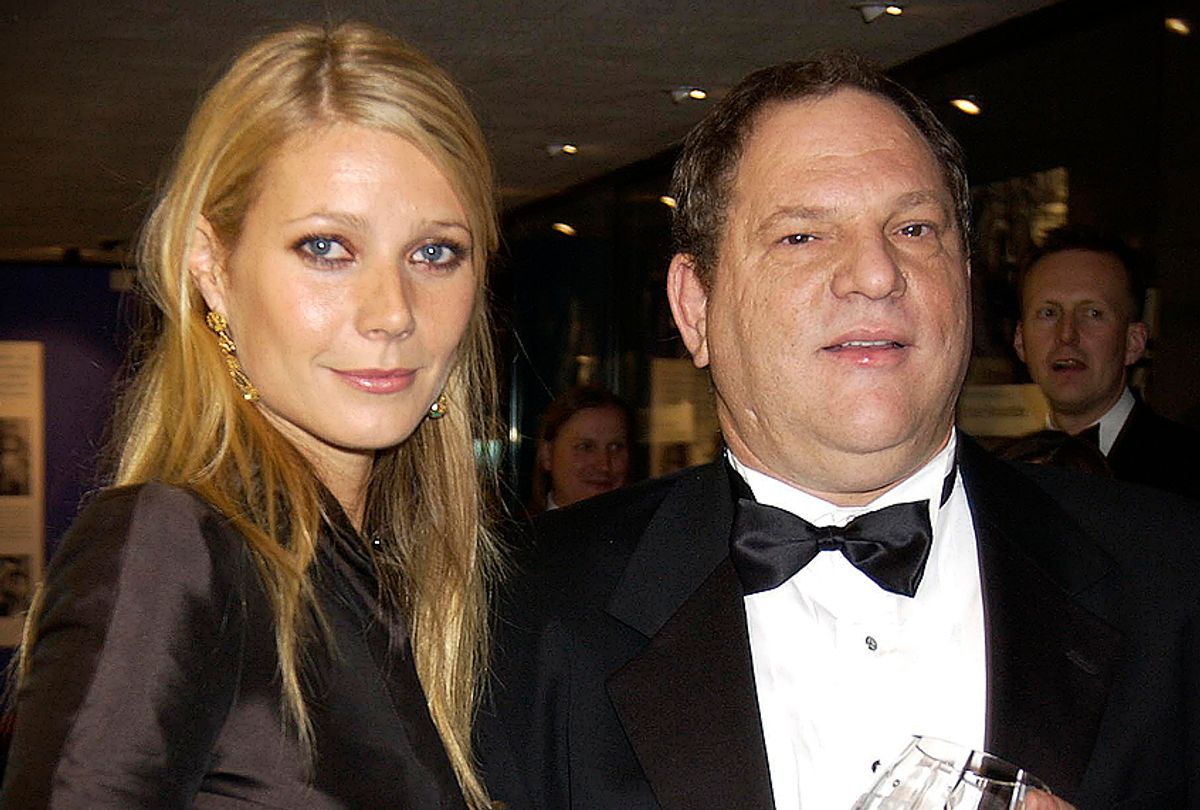 Gwyneth Paltrow and Harvey Weinstein at the 50th Anniversary Gala of the National Film Theatre on October 20, 2002, in London. (Getty Images)
--

Following The New York Times' exposé on Harvey Weinstein last week, and two days after he was fired for those revelations, two new twinned articles have revealed a new crop of Hollywood actresses coming forward with stories of the producer's sexually aggressive behavior.

The New Yorker published an article by Ronnan Farrow with more serious allegations, including reports of Weinstein raping three women, actor Asia Argento included, as well as claims of other types of harassment by actresses Mira Sorvino, Rosanna Arquette and others. Soon after, Gwenyth Paltrow, Angelina Jolie and more came forward in a piece by The New York Times.

The reports feature stories revealing similar methods and a focused modus operandi in all of the encounters. Weinstein took advantage of his position in Hollywood to prey on these women who were afraid to talk about the incidences for fear that he would destroy their careers. The worst of them include forced oral and vaginal sex and unwanted touching.

“Four of the women I interviewed cited encounters in which Weinstein exposed himself or masturbated in front of them,” Farrow says in the New Yorker article. The article even describes a case where the NYPD Special Victims Unit got involved and listened to tapes of Weinstein trying to get a young actress into his hotel room.

The hotel room is the usual scene of many of the encounters, usually after an initial meeting that begins with the actress, Weinstein, and other executives who peter out until Weinstein and the young actress are alone, when he begins to manipulate his prey. It’s explicit that the company, and indeed Hollywood, knew what was going on.

Gwenyth Paltrow told the Times today that the producer led her up to his room when she was 22-years-old, for a massage. She felt that if she didn't comply he would fire her from his film, "Emma," in which she starred. This is the archetypal case of a long and sordid rap sheet.

“I was a kid, I was signed up, I was petrified,” said Paltrow to the Times. Initially thinking of him as a mentor — she called him "Uncle Harvey" — Paltrow claims that Weinstein "screamed at me for a long time” after she rebuffed his advances and alerted her family and friends. She continued to work with his Miramax production studio nonetheless (winning an Oscar for its "Shakespeare in Love"), a sign of just how powerful Weinstein was at the time. “He was alternately generous and supportive and championing, and punitive and bullying,” Paltrow said.

Jolie claims that  “I had a bad experience with Harvey Weinstein in my youth, and as a result, chose never to work with him again and warn others when they did.” The Times noted that this was connected to the film "Playing by Heart," meaning Jolie would have been 23 at the time. “This behavior towards women in any field, any country is unacceptable," the Oscar winner added.

Among the worst cases detailed by Farrow is that of Lucia Evans, a young actor who claims that Weinstein "forced me to perform oral sex on him,” Evans revealed. She said she was “overpowered” and “gave up,” and blamed herself. Evans reports seeing Weinstein in person a few times after the assault. “I remember getting chills down my spine just looking at him. I was so horrified. I have nightmares about him to this day,” she said.

Asia Argento’s story included an initial request for a massage, before an extensive declaration of “no” from the victim. “It’s twisted. A big fat man wanting to eat you. It’s a scary fairy tale,” she said. Eventually she “feigned enjoyment” and even began seeing Weinstein on a regular basis.“After the rape, he won,” she said. She claims to have problems with intimacy to this day. “I’ve been damaged,” she told The New Yorker. “Just talking to you about it, my whole body is shaking.”

The more high profile actresses in Weinstein’s repertoire of horror were able to narrowly escape his advances but still feel he successfully deterred their careers. Fear of retaliation stopped Paltrow, Mira Sorvino, and Rosanna Arquette from speaking out. Angelina Jolie revealed it was her choice to never work with him after a "bad experience" when she was younger.

Katherine Kendall of "Swingers" fame appeared in the Times on Tuesday to say that after Weinstein chased her around a room naked, she thought she would never work again if she spoke up.

Oscar winner Mira Sorvino was able to tell him that it was against her religion to date married men, after he massaged her shoulders. He continued to put her in uncomfortable situations, even going to her apartment for business reasons, but left when Sorvino said a boyfriend was coming over (a friend posing as her boyfriend to protect her, in truth). She believes to this day that some of her career setbacks have been caused by Weinstein. “There may have been other factors, but I definitely felt iced out and that my rejection of Harvey had something to do with it.”

Rosanna Arquette saw a similar dip in her career after she spurned Weinstein following a sexual assault where he came to his hotel room door in a robe and tried to get her to give him a massage and to perform other sexual acts. The potential to wreck her career resulted in her silence for years. "He’s going to be working very hard to track people down and silence people,” she said. “To hurt people. That’s what he does.”

One of the most harrowing accounts come from Ambra Battilana Gutierrez. After an uncomfortable meeting on Weinstein’s office couch where he grabbed her breast, he invited her to see a play he was producing. The NYPD listened in as Weinstein tried to get Gutierrez into his hotel room.

She confronted him at the door about the incident in his office. “I’m used to that,” Weinstein said.

Weinstein, in conversation with Gutierrez, admits to groping her. Here’s the audio: https://t.co/zSQbK5NV0c pic.twitter.com/vmrrSUp43w

The Times relates the story of Dawn Dunning, who was offered a job by Weinstein for three films, but he said that "she could only sign them on a condition: She would have to have three-way sex with him." Dunning reports that after she laughed at what she assumed was a joke, Weinstein became enraged. “You’ll never make it in this business,” she said he told her. “This is how the business works.” The Times notes that Dunning left acting to become a costume designer.

The air of entitlement is evident in Emily Nestor’s story as well. She was a temporary assistant at Weinstein’s company who managed to defer a drink date with Weinstein in favor of an early morning coffee at his hotel. She dressed “frumpy” so as to not inspire an assault. He still flirted with her and offered to help her career, and he bragged about his previous assaults, saying he was “very weirdly proud” of his sexual misconduct and also “that he’d never had to do anything like Bill Cosby,” like drugging women to have sex with him. “Oh, the girls always say ‘no.’ You know, ‘No, no.’ And then they have a beer or two and then they’re throwing themselves at me," she claims Weinstein said.

Nestor describes what seems to be an intimidation tactic where Weinstein referenced a public issue that Amy Adams was having during her press tour of the film "Big Eyes," which he produced. He told Nestor to watch the news cycle carefully and that he'd come out on top in the end. And he did.

This is the running trend in all the stories. Weinstein exhibits and maintains his position in the power structure in order to intimidate and allow the victims to believe it is their fault, that it would be good for their careers, that if he doesn't get what he wants, their careers will be thrown off track or completely destroyed. His complete blindness to his own violence is evident in his matter-of-fact understanding of these encounters and in his preemptive response to The New York Times on New York Post's Page Six, where he self-obsessively talked about how he has to deal with "his personality," rather than structural gender power structures, before using his liberal cache to cover up the main issues at hand.

“I’ve got to deal with my personality, I’ve got to work on my temper, I have got to dig deep," he said in the Post. "I know a lot of people would like me to go into a facility, and I may well just do that—I will go anywhere I can learn more about myself."

"They never write that I raised $50 million for amfAR, nor my work with Robin Hood – instead they focus on trying to bring me down. This is a vendetta, and the next time I see Dean Baquet (the Times executive editor) it will be across a courtroom," he said.