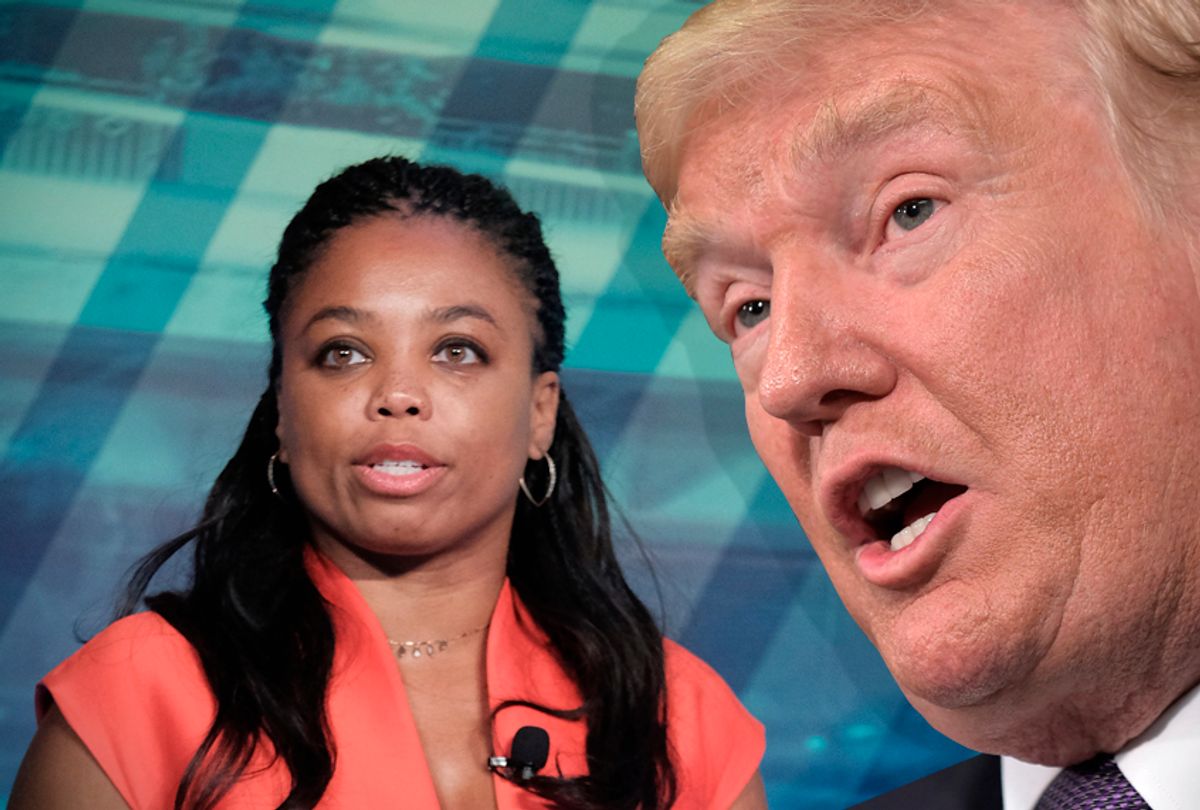 Large swaths of people in Puerto Rico are still without electricity, and the Dreamers' lives are still on the line, but President Donald Trump focused his attention on ESPN anchor Jemele Hill this morning, hours after the network suspended her for a social-media "violation."

The broadcaster, apparently, punished the anchor for criticizing Jerry Jones for saying he would bench players who did not stand for the national anthem. Hill also suggested that those who disagree with Jones should boycott Cowboys' games, merchandise and advertisers that broadcast commercials alongside coverage of that team.

"With Jemele Hill at the mike, it is no wonder ESPN ratings have 'tanked,'" the president wrote on Twitter Tuesday morning.

With Jemele Hill at the mike, it is no wonder ESPN ratings have "tanked," in fact, tanked so badly it is the talk of the industry!

Just hours before, Trump also attacked the NFL, questioning why the league was getting tax breaks while "disrespecting our Anthem, Flag and Country."

Why is the NFL getting massive tax breaks while at the same time disrespecting our Anthem, Flag and Country? Change tax law! — Donald J. Trump (@realDonaldTrump) October 10, 2017

Asserting that the tax law must be changed in regards to the league continues the odd relationship Trump has had with the organization. Throughout the last few decades, Trump has attempted to buy multiple NFL franchises or move his former USFL team into the league. He has never succeeded. As well, he boasts of friendships with several team owners — the Patriots' Robert Kraft in particular — and saw many of them donate considerable amounts of money to his presidential campaign.

As well, Vanity Fair writes that amendments, such as the allowance of the NFL "to enjoy a host of other tax breaks, like financing stadiums with billions in taxpayer money," might indeed be a good thing, which almost ensures Trump will never follow through. A liberal cause, removing such exemptions is something President Barack Obama wanted but failed to achieve.

But by now the war with the NFL has become political currency for Trump, and his biting rhetoric towards black NFL players has served as a distraction and rallying call for his fanbase (even as nearly every campaign promise of his remains unfulfilled). The turn against the league is working for him. Past allegiances and the possibility of picking up liberal policies to cement his stand against the NFL are not part of his political calculus here.

But it goes beyond even that. It appears that the Trump campaign is using Vice President Mike Pence's grandiose walkout from the Colts. v. 49ers game in "protest" (for which Trump took credit), to raise funds for the 2020 campaign.

According to Business Insider, an email sent to constituents said: "Friend, I was so proud of the Vice President. But immediately after the Vice President’s honorable display of leadership and patriotism, the Fake News Media relentlessly ATTACKED him." The email continued, "Please make a contribution of at least $5 to show your support, and our team will send you an 'I STAND FOR THE FLAG' sticker." The email was signed "Donald J. Trump."

As for Hill, ESPN announced her suspension after she complicated the conversation on Twitter about Dallas Cowboys owner Jerry Jones, who, after kneeling and locking arms with his team two weeks before, said players who did the same during the anthem would not play. It was a statement rapper, actor and activist Common likened to a "slave owner mentality."

Hill emphasized that now black players, particularly on the Cowboys, would be put in a bind: forced to choose "football over the community they represent," she tweeted. But how could the onus not just be on black players, whose careers would literally be on the line because of it? She challenged Cowboys fans to take up the fight, if they felt so outraged by Jones' demand. "A more powerful statement is if you stop watching and buying their merchandise," she tweeted.

Don't ask Dak, Dez & other Cowboys players to protest. A more powerful statement is if you stop watching and buying their merchandise.

In far less harsh words than the president had used to suggest an NFL boycott in weeks prior, ESPN labeled Hill's social media address a "second violation of our social media guidelines." Last month, she called Trump a "white supremacist" on Twitter.

Overall, Trump's tirades against Hill and NFL players protesting racial oppression are one in the same: targeting black citizens who don't fall in line. Clearly his diatribes are working. Jerry Jones and ESPN picked up the baton from Trump and forced black players to choose between their agency and their jobs, a far higher standard than the president has even been held to.