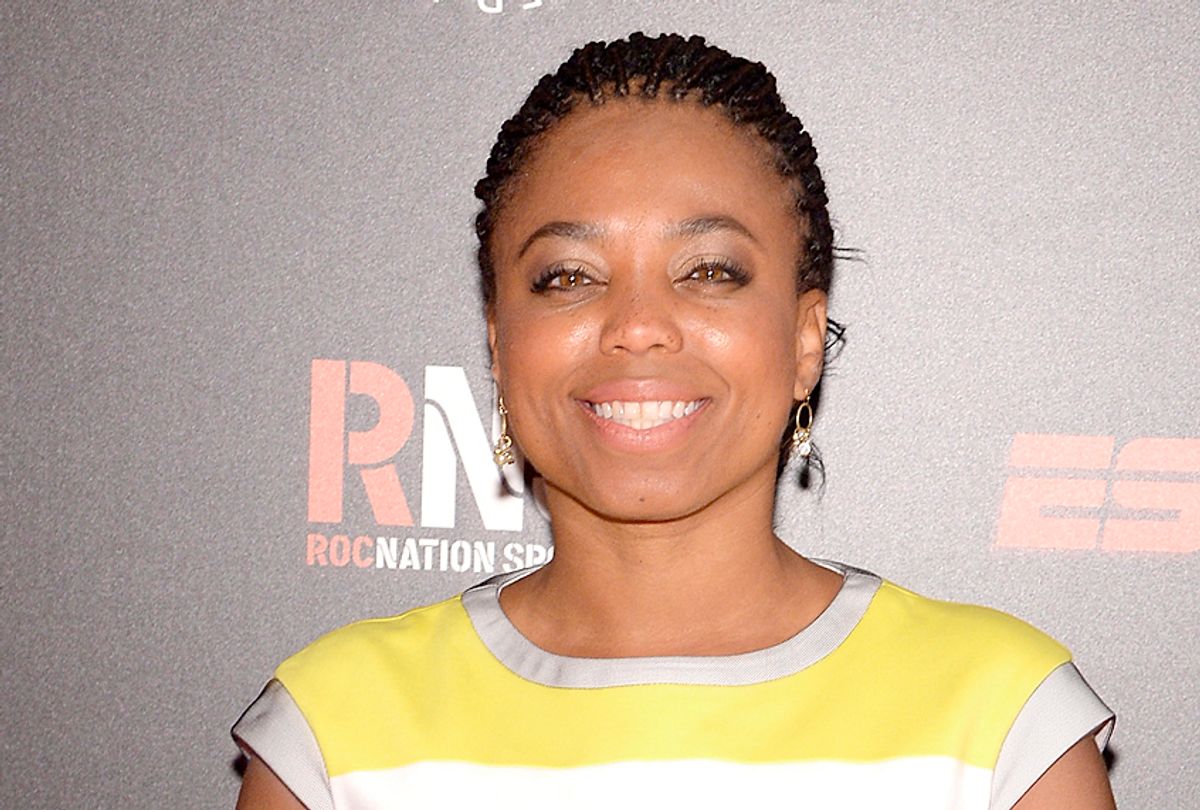 According to the Hollywood Reporter and other sources, sports broadcaster ESPN has suspended on-air personality Jemele Hill for "violating" its social-media policies. The suspension will last two weeks, said the network in a statement.

That statement does not make clear exactly what Hill, who has been outspoken with her feelings on President Donald Trump on Twitter in the past, did to merit the punishment. As published by the Reporter, the statement reads:

Jemele Hill has been suspended for two weeks for a second violation of our social media guidelines. She previously acknowledged letting her colleagues and company down with an impulsive tweet. In the aftermath, all employees were reminded of how individual tweets may reflect negatively on ESPN and that such actions would have consequences. Hence this decision.

The impulsive tweet mentioned above was actually a series of statements made in September in which she called president Trump, among other things, a "white supremacist."

Yesterday, Hill turned to the issue of players kneeling for the national anthem during football games in protest of police brutality against African-Americans, after Dallas Cowboys owner Jerry Jones said in a statement that he would not allow those who demonstrated in that matter to play.

Over a series of 19 tweets, Hill despaired at Jones' decision, responded to those who felt the protests were disrespectful, suggested that the only way to effect change was to make advertisers take notice, and mentioned that the Cowboys and other teams may find it hard to get players to work for them should they abridge their rights to free speech.

Here are just a few of her tweeted statements:

He did. He laid out his entire case. A lot of people have selective hearing. https://t.co/DFOjHKFArW

Jerry Jones also has created a problem for his players, specifically the black ones. If they don't kneel, some will see them as sellouts.

No. Jerry has turned this into them choosing football over the community they represent and that isn't right. https://t.co/u4MgpnCDAI

Don't ask Dak, Dez & other Cowboys players to protest. A more powerful statement is if you stop watching and buying their merchandise.

Cowboys have a huge national following. Lot of black & brown folks are Cowboys fans. What if they turned their backs on them? https://t.co/qezpPwDTAB

This play always work. Change happens when advertisers are impacted. If you feel strongly about JJ's statement, boycott his advertisers. https://t.co/LFXJ9YQe74

Just so we're clear: I'm not advocating a NFL boycott. But an unfair burden has been put on players in Dallas & Miami w/ anthem directives.

It is not clear that these are the tweets that led to ESPN's decision to remove Hill from the air for two weeks, but . . . come on. At this time, Hill has released no comment on her suspension via Twitter or otherwise.

Following her comments about Trump in September, ESPN joined the chorus of critics both within and without the wide world of sports, saying in a statement that "The comments on Twitter from Jemele Hill regarding the president do not represent the position of ESPN." It added, "We have addressed this with Jemele and she recognizes her actions were inappropriate."

This was just the beginning of a month-long media firestorm that saw Hill weathering strong rebukes from commenters on the right, including death threats. Eventually, the criticism would reach the executive branch, culminating with White House spokesperson Sarah Huckabee Sanders suggesting that Hill's comments constituted a fireable offense. The president, too, would weigh in, tweeting, "ESPN is paying a really big price for its politics (and bad programming). People are dumping it in RECORD numbers. Apologize for untruth!"

Trump was referring to the often-debunked theory that ESPN's notable ratings slide over the past few years is due to a mass exodus of conservative viewers turned off by what they see as progressive bias. According to studies, most viewers don't perceive such a bias exists and most experts attribute the majority of the network's ratings decline to changing viewer habits triggered in part by the rise of on-demand streaming content and the vast amount of online sports coverage.

After statements by Sanders and the president, ESPN seemed to offer Hill a certain layer of protection, saying in a statement, "Jemele has a right to her personal opinions, but not to publicly share them on a platform that implies that she was in any way speaking on behalf of ESPN. She has acknowledged that her tweets crossed that line and has apologized for doing so. We accept her apology." Despite this, rumors persisted that the network had tried, and failed, to replace her for a broadcast.

Hill addressed the controversy on the same day, tweeting, "My comments on Twitter expressed my personal beliefs. My regret is that my comments and the public way I made them painted ESPN in an unfair light." She added, "My respect for the company and my colleagues remains unconditional." Her thoughts were echoed in a subsequent editorial she wrote for The Undefeated.

Hill is far from the first ESPN on-air personality to be suspended for their actions on Twitter or off camera. Network mainstay Linda Cohn received a suspension after saying ESPN was too focused on politics, during a September radio interview. Others have been suspended or fired for bigoted statements or embarrassing behavior.

After Hill's comments, ESPN president John Skipper wrote in a memo to employees that read:

ESPN is not a political organization . . . Where sports and politics intersect, no one is told what view they must express. At the same time, ESPN has values. We are committed to inclusion and an environment of tolerance where everyone in a diverse work force has the equal opportunity to succeed. We consider this human, not political. Consequently, we insist that no one be denigrated for who they are including their gender, ethnicity, religious beliefs or sexual identity.