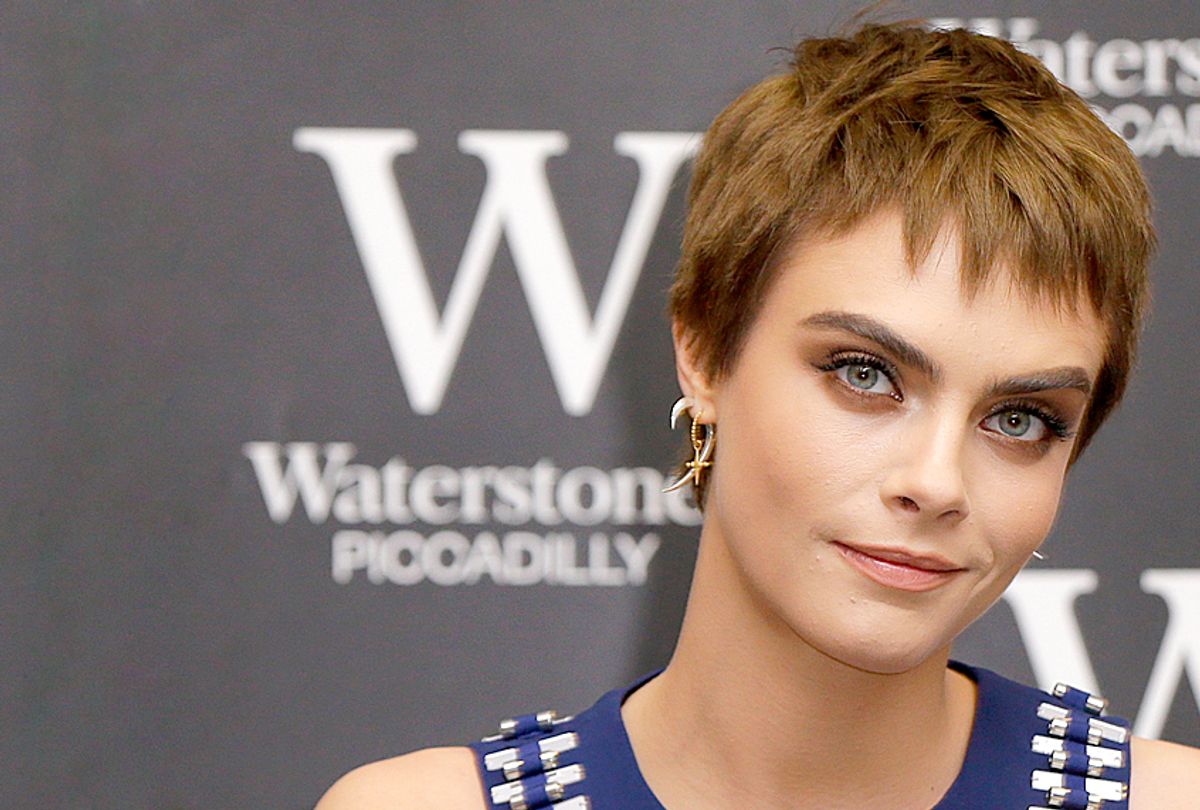 Via her Instagram account, Delevingne detailed a disturbing run-in with Weinstein that she claims happened some two years ago, one that involved not only unwanted advances and underhanded threats, but homophobic jabs from Weinstein. Delevingne was most likely 23 at the time — roughly the same age Paltrow, Jolie, Argento and others were at the times they allege he abused them.

“When I first started to work as an actress, I was working on a film and I received a call from‎ Harvey Weinstein asking if I had slept with any of the women I was seen out with in the media," Delevingne wrote. Delevingne is bisexual and has been spotted with famous figures such as Michelle Rodriguez and St. Vincent (Annie Clark).

"It was a very odd and uncomfortable call," she continued. "I answered none of his questions and hurried off the phone but before I hung up, he said to me that If I was gay or decided to be with a woman especially in public that I’d never get the role of a straight woman or make it as an actress in Hollywood.” This alleged statement is striking given that Weinstein produced the pro-LGBTQ film "Carol" and other enlightened projects.

"A year or two later," she continued, "I went to a meeting with him in the lobby of a hotel with a director about an upcoming film. The director left the meeting and Harvey asked me to stay and chat with him. As soon as we were alone he began to brag about all the actresses he had slept with and how he had made their careers and spoke about other inappropriate things of a sexual nature."

According to Delevingne, Weinstein then engaged in what has now become pattern familiar throughout the many allegations attached to him "He then invited me to his room," she says. "I quickly declined and asked his assistant if my car was outside. She said it wasn’t and wouldn’t be for a bit and I should go to his room."

"At that moment I felt very powerless and scared but didn’t want to act that way hoping that I was wrong about the situation,” Delevingne continued. “When I arrived I was relieved to find another woman in his room and thought immediately I was safe." She was wrong.

"[Weinstein] asked us to kiss and she began some sort of advances upon his direction," she says. "I swiftly got up and asked him if he knew that I could sing. And I began to sing . . . I thought it would make the situation better . . more professional . . . like an audition . . . I was so nervous." The gambit did not quite work.

"After singing I said again that I had to leave," claims Delevingne. "He walked me to the door and stood in front of it and tried to kiss me on the lips. I stopped him and managed to get out of the room."

Unlike others, Delevingne avoided a full assault. Yet the effects were considerable. "I still got the part for the film and always thought that he gave it to me because of what happened," she said. "Since then I felt awful that I did the movie. I felt like I didn’t deserve the part."

The sole movie featuring Delevingne on The Weinstein Company's slate is the long-delayed "Tulip Fever." Delevingne was cast in 2014, the same year production on the film started and ended. It debuted in limited release this September.

From there, she mirrors much of what other women have been saying about Weinstein and what women everywhere say about their abusers. "I was so hesitant about speaking out . . . I didn’t want to hurt his family. I felt guilty as if I did something wrong. I was also terrified that this sort of thing had happened to so many women I know but no one had said anything because of fear.”

As new elements to Weinstein's story continue to spill out at a frantic rate, Delevingne is not the only young star to have detailed such an encounter with the producer today. Among others is French actor Léa Seydoux, who claimed Weinstein assaulted her at the Hôtel Plaza Athénée around 2012. She would have been 25 at the time.

"We were talking on the sofa when he suddenly jumped on me and tried to kiss me," Seydoux told the Guardian. "I had to defend myself. He’s big and fat, so I had to be forceful to resist him." She continued, "I left his room, thoroughly disgusted. I wasn’t afraid of him, though. Because I knew what kind of man he was all along."

“He tried more than once,” she added, “I pushed him physically. I think he respected me because I resisted him." Seydoux described the producer, in his late 50s at the time, as "losing control."

Again, Seydoux's account aligns with many others. This was never going to be about work," she said. "He had other intentions – I could see that very clearly . . . All throughout the evening, he flirted and stared at me as if I was a piece of meat. It was hard to say no because he’s so powerful. I’m an actress and he’s a producer. My agent at the time said to stay far [away from him] and be polite."

She notes that she did not speak out due to fear of career repercussions, and saw him regularly at events. "We are in the same industry, so its impossible to avoid him. I’ve seen how he operates: the way he looks for an opening. The way he tests women to see what he can get away with."

She ended, "That’s the most disgusting thing. Everyone knew what Harvey was up to and no one did anything. It’s unbelievable that he’s been able to act like this for decades and still keep his career."

Currently, Weinstein has been fired from the company he founded; the Academy of Motion Pictures Arts and Sciences, the organization behind the Oscars, is working to revoke his membership. Even The Weinstein Company has announced it will change it name. Still, it took no less than 30 years of abuse, some of it well-documented, for any of that to happen.