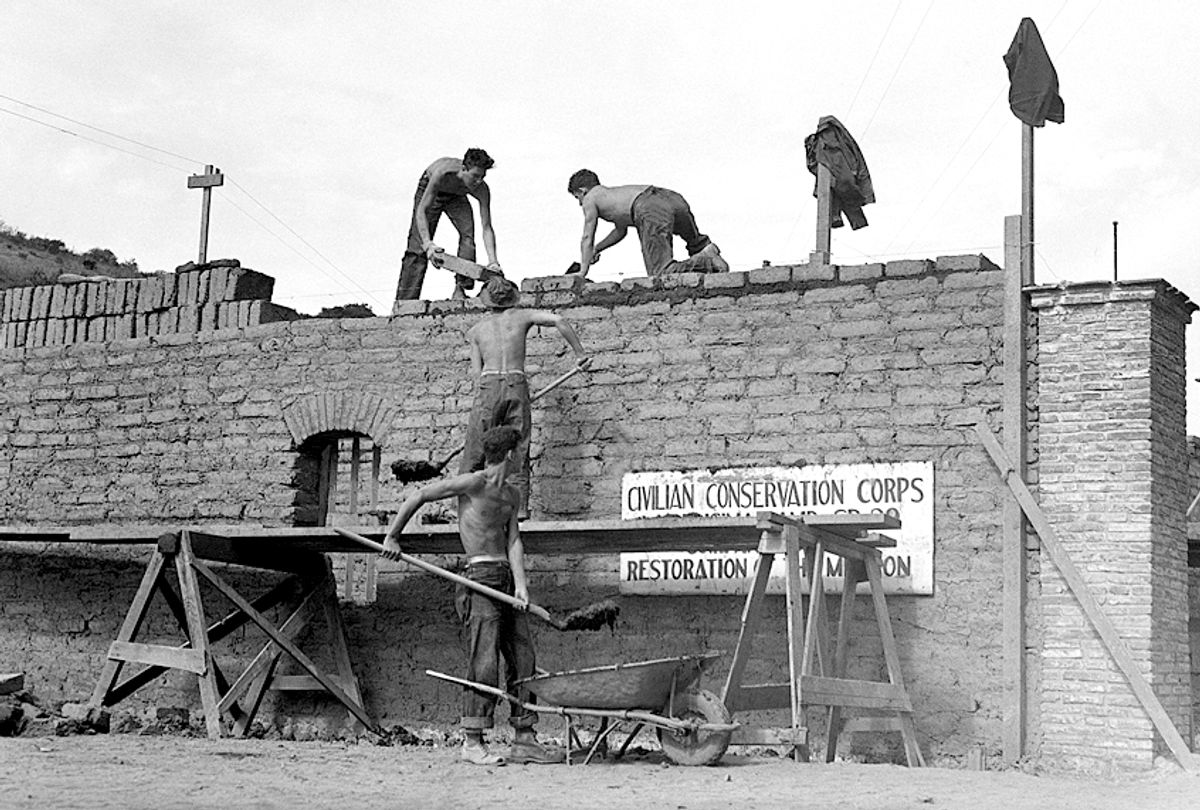 Last week, a panel in the House of Representatives authorized up to $10 billion to be spent on President Donald Trump's infamous U.S.-Mexico border wall. This is the same border wall, it must be noted, that everyone from Reason to Time magazine acknowledges won't actually do many of the things that Trump claims it will.

Yet there is a way that Trump could spend that kind of money and actually help Americans in the process. Instead of complaining that the devastation wrought on Puerto Rico by Hurricane Maria has "thrown our budget out of whack," Trump could dedicate federal dollars to rebuilding the devastated commonwealth.

Dr. Luis Martínez-Fernández, a professor of history at the University of Central Florida who specializes in Latin America, pointed to the most prominent public works project of the 1930s as a guide.

"[Franklin] Roosevelt was the president, and as you know, he was surrounded by a brain trust of people who were there to serve their fellow Americans in a time of crisis," he said in an interview. "Roosevelt, and particularly through Eleanor Roosevelt, had a very intimate relationship with the progressive leadership of Puerto Rico during the 1930s. I'm referring mainly to the leader of the progressive faction, Luis Muñoz Marín."

It is hard not to draw a comparison here between Roosevelt's strong relationship with Muñoz Marín and Trump's ongoing and pointless feud with San Juan Mayor Carmen Yulín Cruz. Whereas Trump has repeatedly antagonized Cruz for calling out his administration's inadequate activity in Puerto Rico, Martínez-Fernández explained that Roosevelt and Muñoz Marín (who would later became Puerto Rico's first governor) "would sit together, they would talk, they would negotiate -- which is a very different set of circumstances from what we have now."

Roosevelt responded to the needs outlined by Puerto Rico's leaders in a constructive and generous way.

"There were two New Deal programs specifically created for Puerto Rico," Martínez-Fernández said, as part of the sweeping social and economic programs that Roosevelt put in place throughout the United States in the 1930s. "The first, created in 1933, was called the Puerto Rico Emergency Relief Administration (PRERA). That one was for the more immediate needs. Again, one could argue that the Great Depression was also a war on the island — which, interestingly enough, was compounded by two devastating hurricanes that hit the island: San Felipe in 1928 and San Ciprian in 1932.

"The second program was the Puerto Rico Recovery Administration (PRRA)," Martínez-Fernández continued, "and that one started two years later. At a time of massive unemployment, it rebuilt the facilities of the University of Puerto Rico, which are beautiful. It also electrified the island. In other words, it was a huge investment in infrastructure that included road building. The other one, PRERA, people on the island associate more with emergency food relief, for example -- surplus cheese, surplus sardines, that kind of thing."

"First, the cleanup effort -- there's a lot of debris and it needs to be moved out of the way. On a small island they will have to find a place for that," he said. "Second, speed up a package of relief similar to Hurricane Sandy's. It may have to be larger. The next one? Be ready for refugees leaving the island in large numbers." He suggested that plans should be ready to accommodate them in cities with large Puerto Rican communities in place, including Orlando, Chicago, New York and elsewhere.

Martínez-Fernández noted that there's an urgent need to rebuild tens of thousands of homes in Puerto Rico. "It will require higher standards, better materials, and that's going to take time and money. The infrastructure is going to be essential, making all the resources available to rebuild roads, etc."

There is a sad irony to the fact that Trump, who clearly wants to be remembered as a great leader, doesn't seem to understand the most rudimentary components even of mediocre leadership. While the president hasn't hesitated to toss paper towels at the people of Puerto Rico as if he were Santa Claus, he hasn't even hinted at the possibility of spending the kind of money on rebuilding this American territory that a real leader like FDR would have.